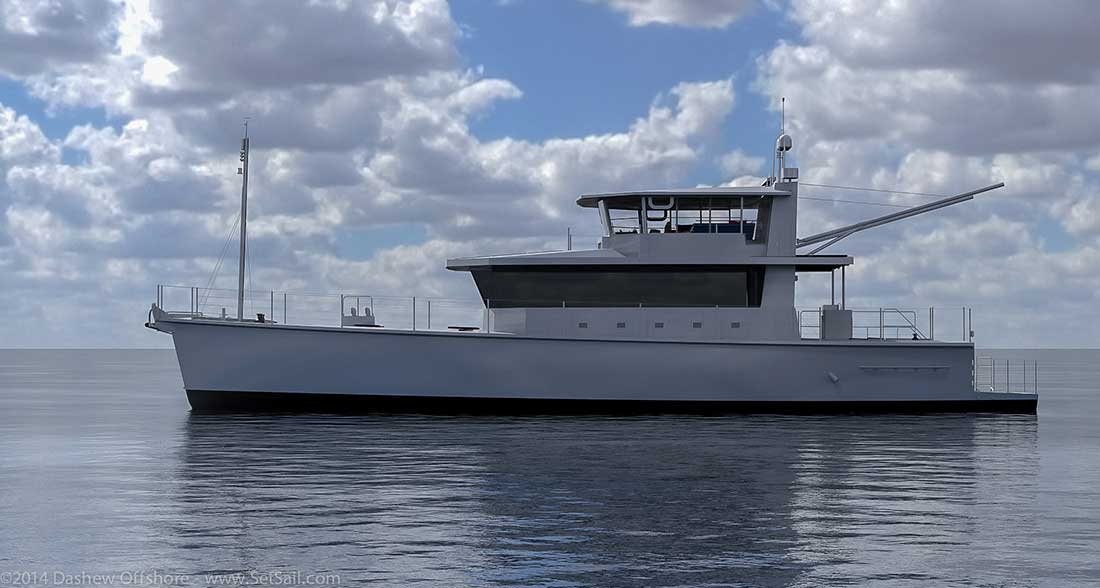 We want to talk about a subject often avoided: Size. It is important for comfort, for aesthetics, and for speed. This has been much on our mind of late as we reach the “hard point” in the build cycle for the FPB 78, after which changes are not allowed. If you study the renderings in this post you will note the Dream Machine has a different look.

She has had a bit of sculpting aft on her topsides, and the swim step lengthened. The impact, in terms of aesthetics and performance is substantial.

The logic behind this, and the tradeoffs, may be of interest.

First is our desire to have an official length less than 24 meters, as above this a yacht is considered a ship in traffic separation areas and required to stay with the big guys, a prospect we find unpleasant. Measurement rules vary with the flag flown, but often start at the rudder post or corner of the deck, and exclude the swim step.

The FPB 78 until recently had an official length under Lloyd’s Rules of 22.8m or 74.8 feet. Adding in the swim step brought her to 23.8m/78 feet LOD. Which meant we had some “official” length left with which to play if it looked favorable, while still staying below the 24m rule.

Many dimensions in yachts can be compressed or made smaller without impacting their function. Not so waterline. Comfort, speed, range, and as a result safety, are directly related to waterline length. Longer waterline means more boat speed, plain and simple. Still, we don’t increase the canoe body length purely for speed – at least not often. There is docking to consider, swinging room at anchor, maintenance, and a desire to have sufficient length to get the job done and no more. Also, excess longitudinal stability leads to an unpleasant ride heading into the waves. To the extent the shape of the hull results in a hull form with less beam aft, the pitching issue is mitigated. 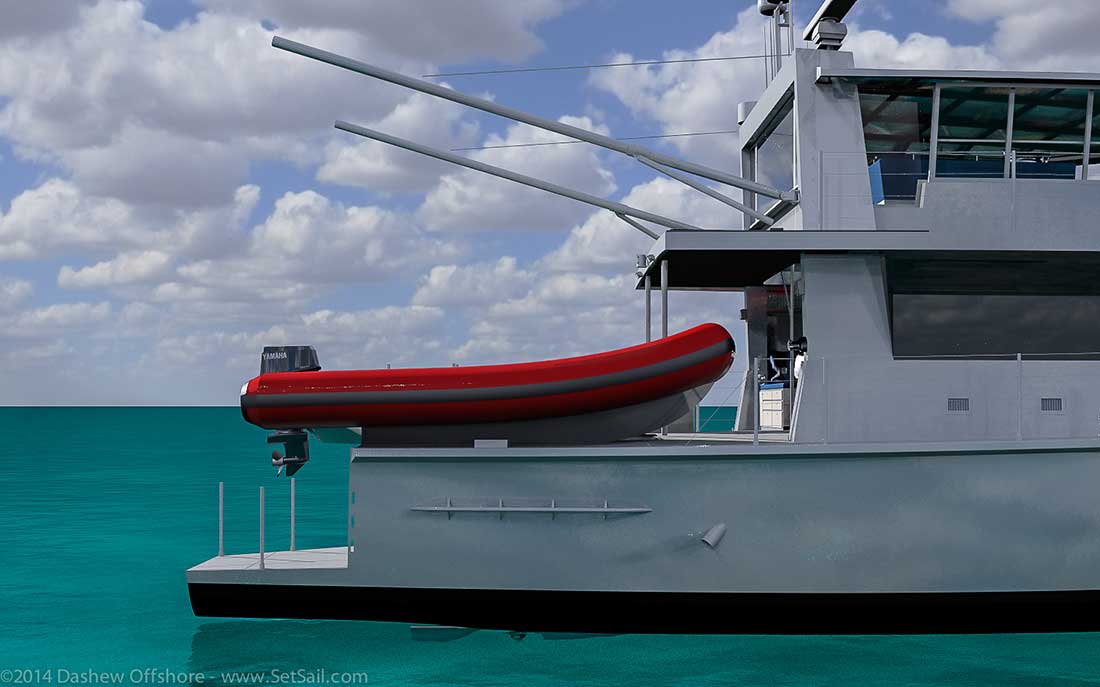 It was our search for a dinghy which would be good in chop that drove extending the hull. Having come to the conclusion that what we were after was a long skinny RIB, we needed a place for it to sit. 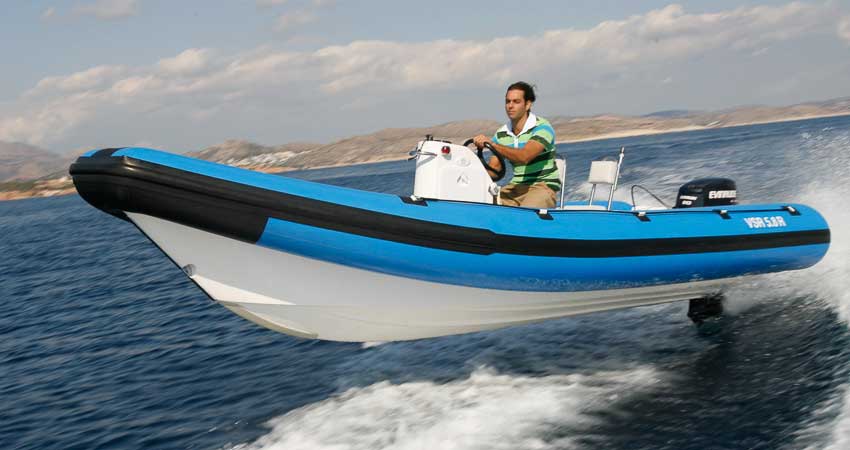 Aside from the big primary dink, there is added capacity in the stern lockers. The starboard flammable stores locker will hold 14-to-18 20 liter containers of outboard fuel. Another benefit is the port side fishing station, where you can fight your fish close to the action, and coordinate with the person on the swim step trying to boat the thrashing monster.

There is so much freeboard – 2.2m/7+ft from waterline to the deck edge at the stern – that coming alongside and holding the dink by hanging onto the deck edge, belting or stanchion, is not practical. Hence the topside pipe rail aft, situated where it can be easily grabbed or tied onto. 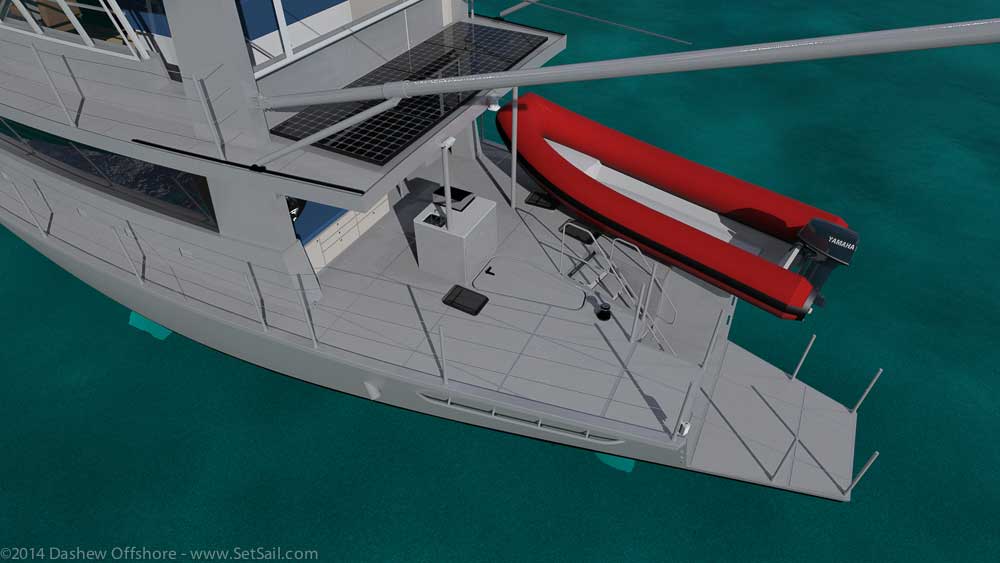 The swim step extension itself opens up some opportunities for unloading groceries and passengers. It also makes hauling the smaller dink at night a very simple affair. 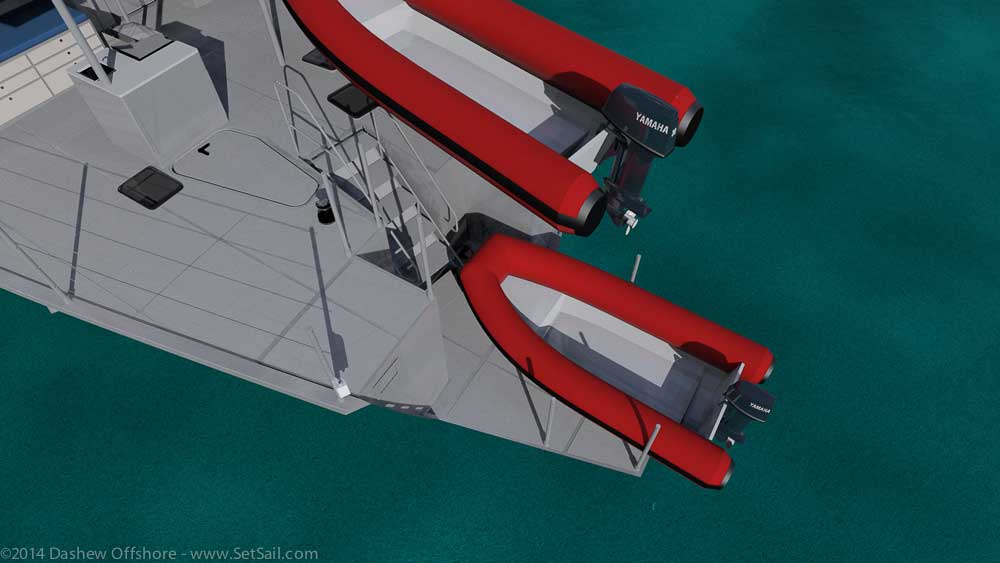 Rather than leave it floating, or hauling it up on deck with the booms, we can now drag it up onto the swim step with the aft deck winch. We would not carry the dinghy here at sea, but for protected between-anchorage trips, when at anchor, and in emergency if we have to quickly exit an open anchorage that has become a lee shore, this will work great.

Which brings us full circle back to the ultimate benefit of this longer waterline: speed and efficiency.  Waterline is the single most powerful ingredient you can employ in the war against drag. Adding an extension like we have shown, a modest cost and minimum weight gain, yields a substantial improvement in efficiency. The fact that this added canoe body occurs all the way aft gives us a chance at better controlling prop flow, which can lead to an even more favorable outcome.

You can use this efficiency for better range or more boat speed. In our case, with sufficient range for the longest passages, we will most probably add a bit of boat speed. Where 11 knots/264NM per day might have been the previous sweet spot for the mix of ambiance, fuel burn, and weather risk factors, we are probably now cruising at 11.5 to maybe 12 knots  (276/288 NM per day).

This entry was posted on Friday, January 31st, 2014 at 12:27 am and is filed under Dashew Logs, FPB 78, three. Both comments and pings are currently closed.