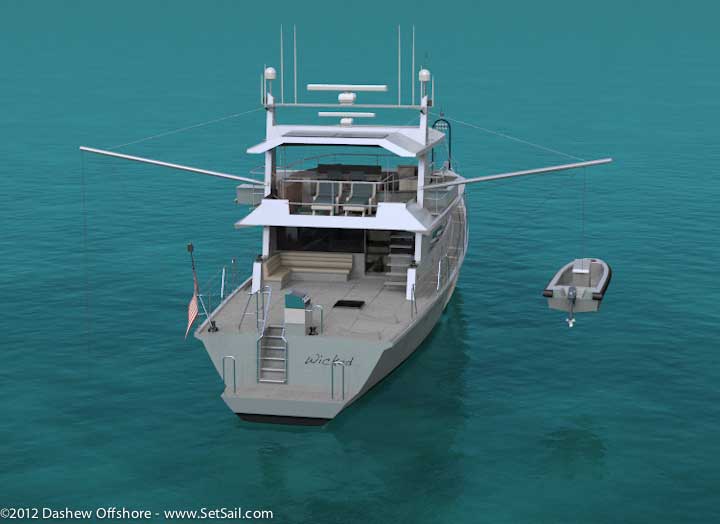 Among the very first things we look at in designing a yacht is dinghy storage, launching, and retrieval. This design aspect is as fundamental to successful cruising as anything else aboard. We have had a simple and reliable system since the first FPB first launched seven years ago, modified only recently by the advent of deck winches that power out as well as in. With booms easily controlled by permanent guys, locked off with rope clutches if required, and the dink stowed at deck level, the process is easy enough to get into and out of the water that we usually stow it aboard each evening.

As simple as this is, we still consider this to be potentially the most dangerous job on board.

With the Wicked FPB we have refined the dinghy process to make it significantly easier and more controlled. 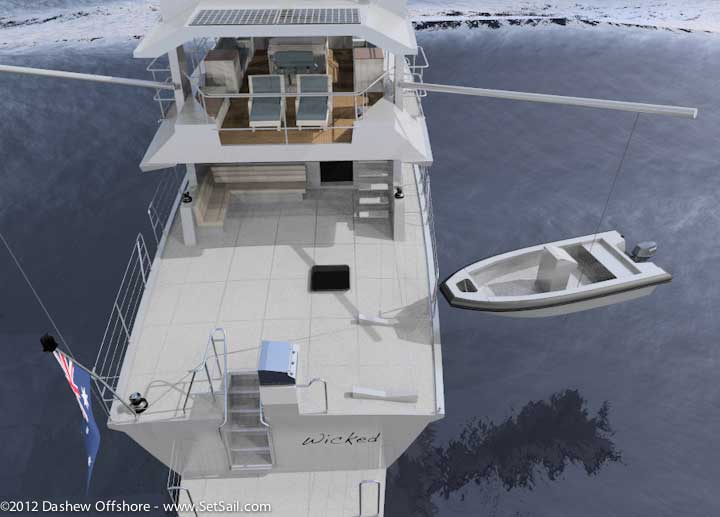 Let’s walk through the process. We’ll bring the dinghy back aboard as this is somewhat more difficult than launching. Step one is to grab the always attached lifting bridle with the boathook, snap on the halyard shackle from the three-to-one tackle, and put the halyard tail on the electric self-tailing winch. As the dinghy is lifted, its weight naturally heels the mother ship and the boom runs out automatically, until the afterguy stops its travel at a  pre-marked position.

Hoist the dinghy until it is high enough to clear the deck edge. Notice the life line section has been removed (remove two pelican hooks and remove one stanchion). Keeping the dinghy low like this, rather than lifting it over the life lines, opens up a series of new possibilities.

Next, we take the dinghy bow line through a snatch block on deck to one of the electric winches (there are six aboard). The remote control has buttons for these winches, and pushing the bow line winch pulls the dinghy and boom across the boat. 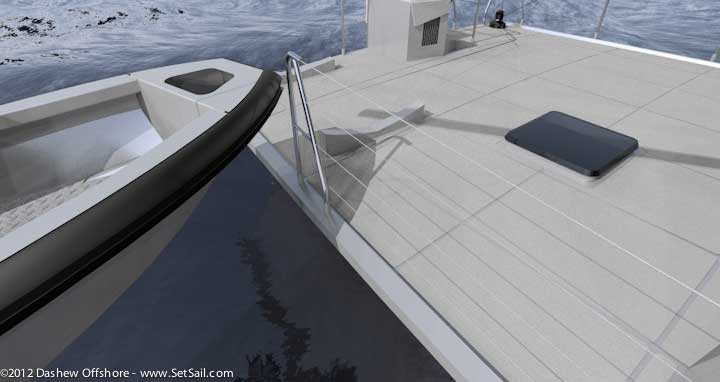 One of the keys to the process is the dinghy rotating around this after life line brace. As the winch pulls the dink and boom across the boat, the angle is constantly opening up around the turning stanchion. 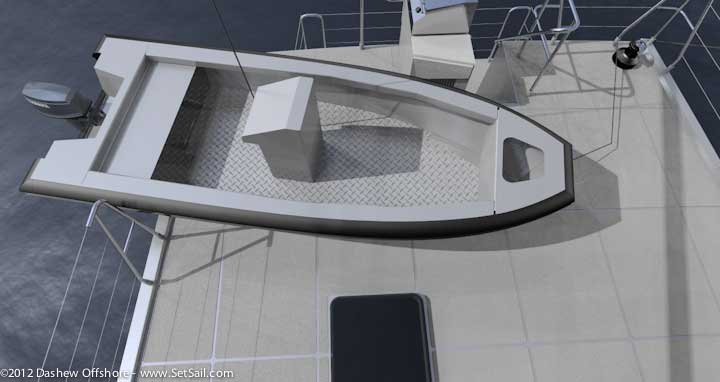 The dinghy is now far enough onto the after deck that the pick point of the halyard is over the centerline of the storage chocks. 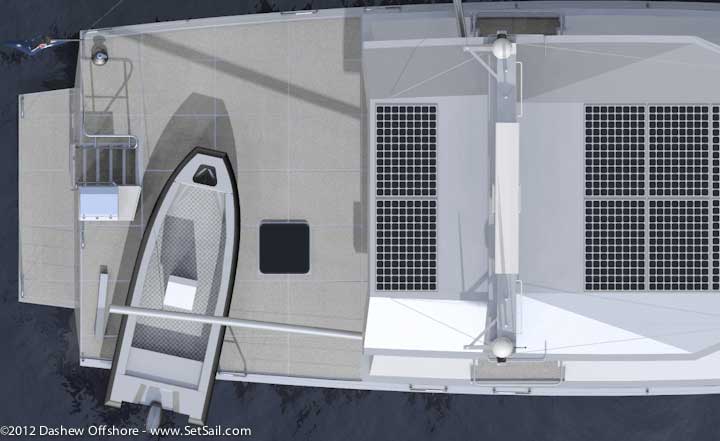 The dinghy is now trapped between the engine room air intake/BBQ structure (adjacent the steps to the boarding platform) and the life line system after brace. 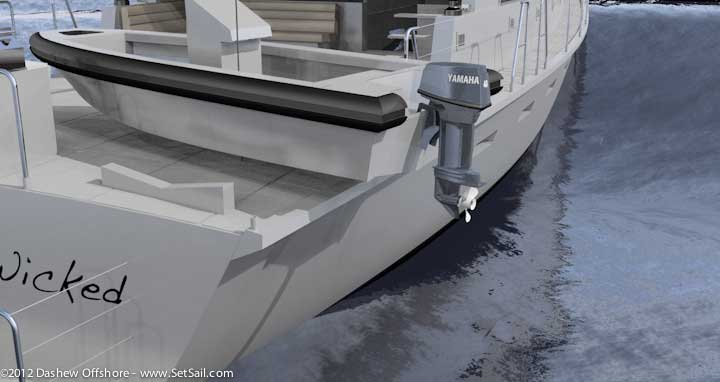 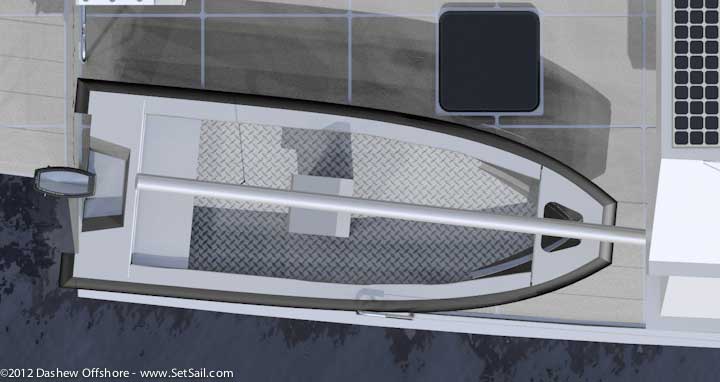 Release the dinghy bow line from the winch, rotate it in line with the chocks, and lower. 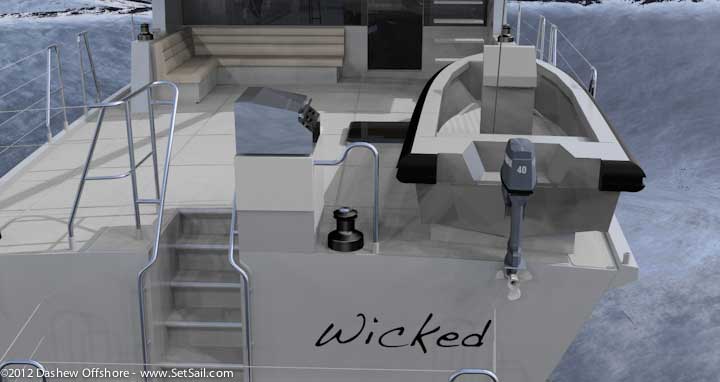 Tie off a few pre-rigged lashings, and you are ready to go to sea. On Wind Horse, this entire process would take two of us five minutes. With the Wicked new FPB we expect this to be even quicker. Wickedly simple, right?

It is, in calm conditions. But what happens when you have to get the dinghy back aboard and the mother ship is bouncing around? You know that this is going to happen in the dark, with a rising gale threatening what was once a safe anchorage. 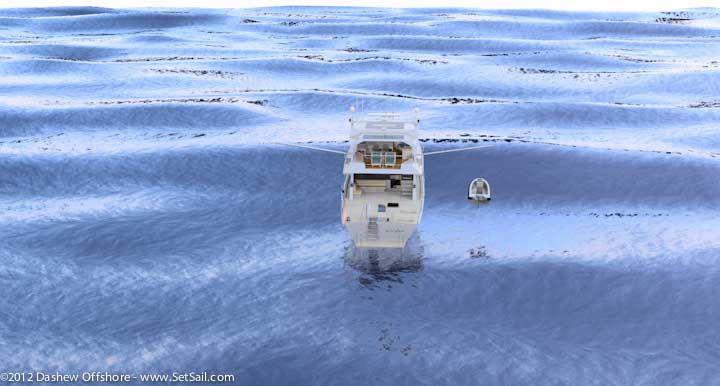 Rather than a calm, stable platform, we now have a rolling deck with a 900 pound/400kg dinghy hanging from a pivoting boom. This is the scenario that all serious cruising yachts are going to face sooner or later. Your choices are stark: put to sea towing the dinghy and probably lose it, wait out the onshore gale while anchored and perhaps end up on the beach, try to get the dinghy out of the water and back on deck, or cut the dinghy free and then exit.

Boom control with those permanently rigged fore and afterguys, plus the new retrieval procedure that traps the dinghy to minimize its movement, greatly expand the conditions in which the dinghy can be controlled and brought aboard.

But much more importantly, the ease of launch and retrieval means there is no reason to leave the dink in the water in exposed anchorages. Bringing it aboard every evening is a snap. In which case, with the dinghy secured on deck, should a swell begin to sweep into the anchorage there is no hesitation in getting underway, to the security of deep water and the open sea. 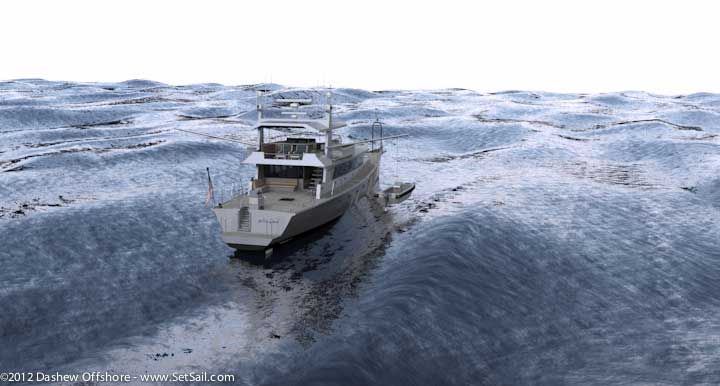 This entry was posted on Tuesday, February 7th, 2012 at 9:26 pm and is filed under Dashew Logs, FPB Series Notes, Wicked FPB 97. Both comments and pings are currently closed.


23 Responses to “The Easiest Dinghy Launch and Retrieval – Wickedly Simple”