When FPB 64-5 owner John Henrichs mentioned he was getting a Pepwave Router that would combine and/or select from a variety of Internet sources we were intrigued. With the need to be reliably available for Skype and e-mail traffic for the FPB production cycle, and cruising the East Coast of the US where connectivity is not always guaranteed, it seemed like it might be the right tool for us. But the price, somewhat less than 1300 US$, was a put-off. Still, from a business perspective, if it worked, it would be worthwhile.

We chatted with the techs at Pepwave and ended up with a Pepwave Max HD2 to test. Cory McMahon at Triton Marine Services did the install for us.

This unit allows you to connect a variety of Internet sources. In our case right now we have two wifi antennae:  Verizon 3G and AT&T 3G connections, as shown in the first graphic. We are still at Jarrett Bay, near Beaufort, North Carolina, and the cell signals are weak and slow. The Jarrett Bay wifi signals are usually somewhat better.

All four of the sources are available, as shown here. Each time there is a new Internet event, a different batch of data at a new URL is addressed, the Pepwave software “pings” the various sources, and selects the fastest from those available under priority.

This is a Sunday evening speed test of the wifi signal, much faster than we would see with our old system. Note here that the two cell signals are under the priority two category, and are shown in standby mode. Should the first priority modes drop below preset quality, then the priority two source(s) kicks in.

This way you might have the costly data on the cell for when wifi was too slow or unavailable. And if there is sat com aboard, it might be disabled most of the time, but brought online in standby mode when you absolutely had to have reliable communications. 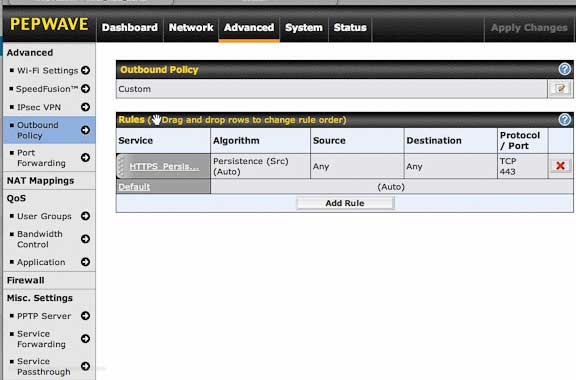 The Pepwave software allows you to set up rules for who gets to do what and how different sources are assigned. For example, sat com might be reserved for certain users (those who write the checks) and only for e-mail. Wifi might be used by everyone, and cell for just the owners. We have not yet tried to set up these rules, but Pepwave has good tech support and we are told that, with a little hand-holding, even Luddites like us can work through this. Right now the default rule is to allow all users all sources, and to check for fastest available connection each session.

There is a bandwidth monitor, showing the data usage on each available channel. Here we are downloading a photo from our photo server as a test. This is coming in over the wifi WAN port on the first antennae connected to Jarrett Bay. There is also data coming in over the Verizon 3G connection (bottom graph). There are accumulators available for the various channels, and settings to let the user know to change sources when certain levels have been reached, so as to avoid overage charges.

The Pepwave system comes with six little antennae, two for cell, two for the LAN (your personal wifi network) and two for WAN wifi. Plus you can connect sat com and cable modems, and there is a plug for a USB cell phone system modem. These will work, and we started out with these, but for best cruising results you will want external antennae. This is an area in which we have not found a single, reliable source of information, and we are hopeful that some our our SetSail visitors will have input on this subject.

What we’ve ended up with is a pair of external cell phone antennae (unpowered). And then, after much messing about, a pair of Rogue Wave units for wifi. The Rogue Waves use a power over Ethernet (POE) amplifier and Ethernet cable, so line loss and distance from the router are not the problem they would otherwise be.

To choose a wifi signal, the Rogue Wave antenna  in question is addressed through its URL, all of which  goes through the Pepwave router. 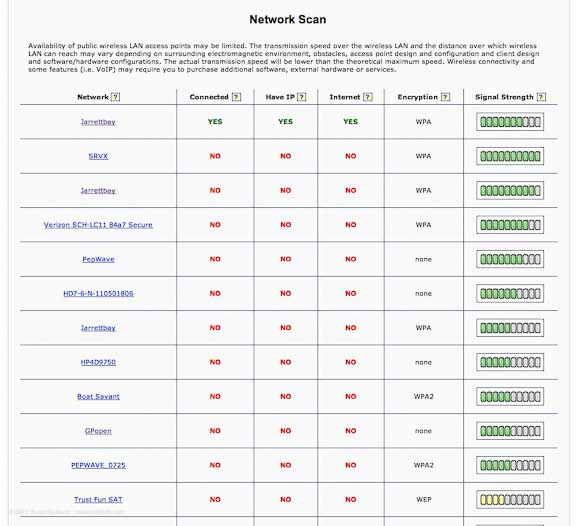 The page above magically appears, showing a selection of wifi signals from which to choose. This process involves moving all the connections except the Rogue Wave antennae to the disabled list, tying in the URL, and selecting the wifi source. It sounds complicated, but in reality is quite simple, and is something that only needs doing if you want two wifi signals. The Pepwave router will then select the fastest of the two wifi signals.

So far the system is working as described above for the past week. As we get more experience we’ll update you. In the meantime, several more FPB owners have opted for this approach, so eventually we should have a range of experience. And we encourage others to fill in the gaps as there are bound to be more technically astute SetSailors than these humble correspondents.

This entry was posted on Wednesday, July 11th, 2012 at 6:53 am and is filed under Cruiser's Tech Talk. Both comments and pings are currently closed.