Efficient, Versatile, Easy-To-Use Communications: What Is the Answer For Cruisers? 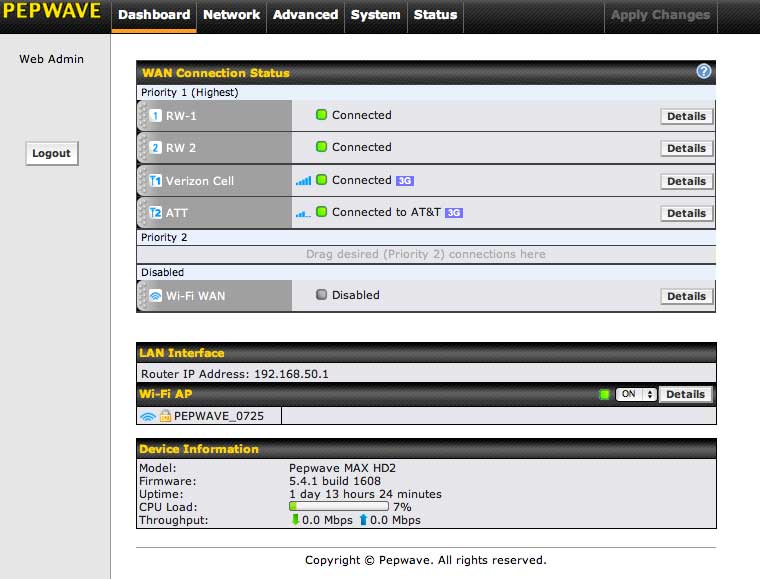 Wind Horse is at anchor in Pulpit Harbor, Maine. This is a lovely spot: a few other yachts on moorings, room to swing for us, calm enough for the rowing dink, and an osprey nest at the entrance. It is less than an hour from “civilization”, as in Rockport or Camden. We could sit here for a long time if the communications were sufficient for us keep us up with our responsibilities. But given the spotty 2G reception from both Verizon and AT&T, we’d be hard pressed to spend much  time prior to this season. However, now we have this costly Pepwave router, and we’re glad we made the investment.

As you can see from the first screen shot, we are connected to both wifi antennae, each on its own signal from a different land based computer, and both cell accounts. The Pepwave router “pings” all four active sources constantly and selects the fastest.

You can keep track of the current data rates on each connection, as shown above. Note that at one time or another each of the four connections is helping out. 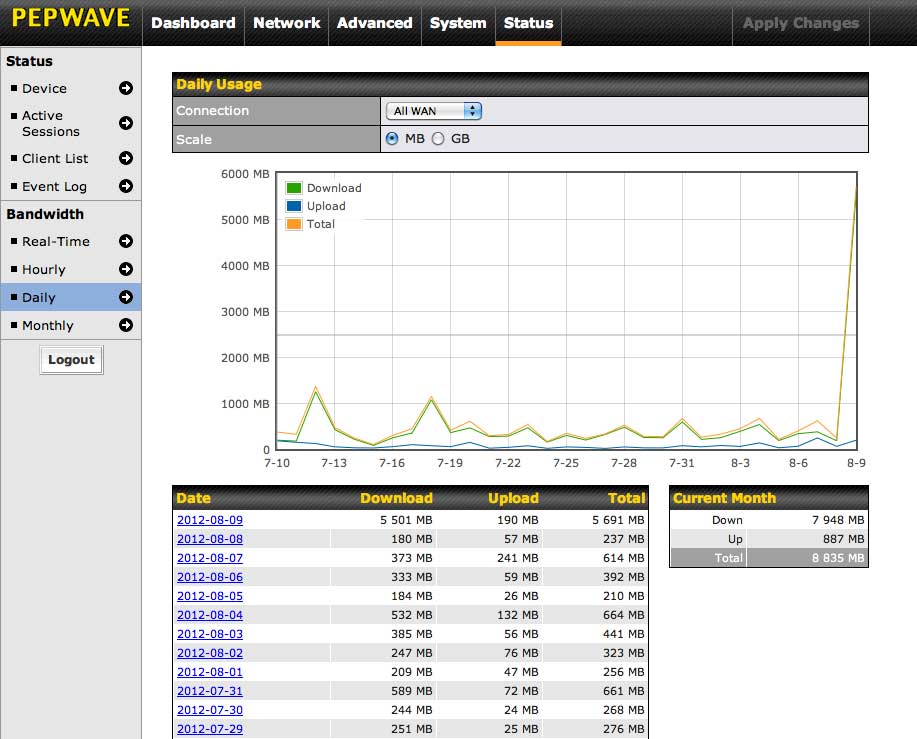 In the last 24 hours we’ve had several long Skype conference calls with New Zealand, talked to Europe a number of times, and been on the Skype phone with Todd for hours. Then there are family contacts. With several robust wifi connections we’ve been up and downloading a bunch of data at the same time, the record of which you can see above. 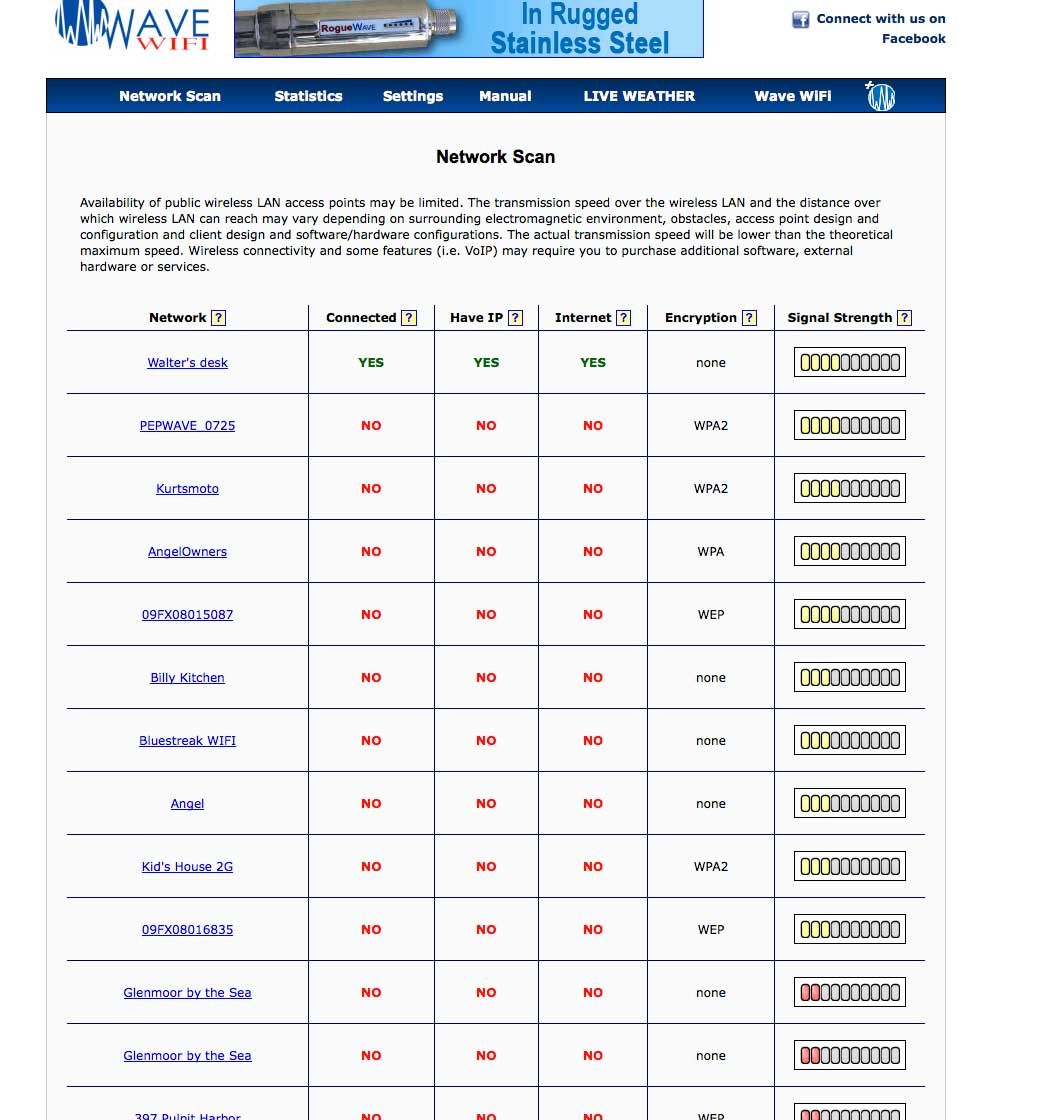 We’ve mentioned the Rogue Wave wifi antenna, of which there are two, in previous posts. We could do the same job for a fraction of the cost, but their software is so simple and easy to use that it makes the extra price worthwhile. Each antenna has its own internet address, and we simply type that in using the Firefox browser to bring up the page shown above. We select the signal to lock onto, and close the window. We do this twice at each new anchorage, once for each antenna. 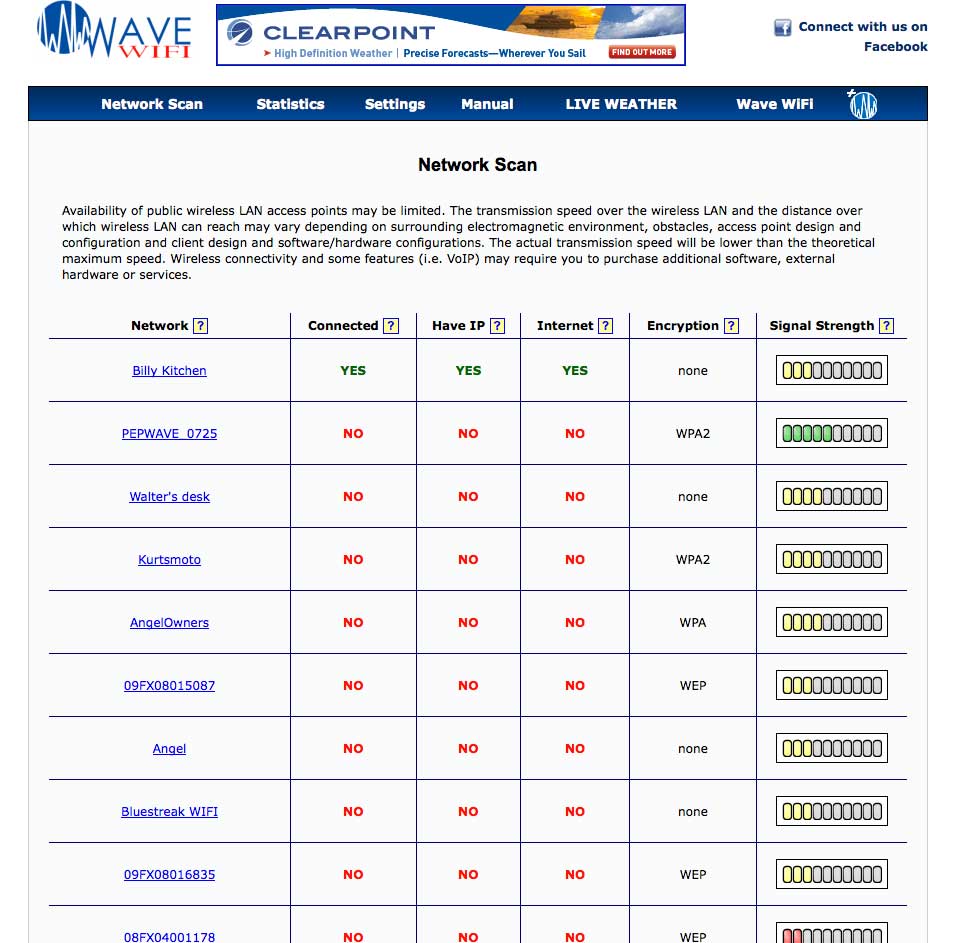 The second antenna is shown here.

The Pepwave router costs around US$1300. The two Rogue Wave antenna add about US$800. The installation is an additional 16 to 24 hours of labor, plus maybe $500 in wire. A substantial package to be sure. But if your ability to cruise and choice of destinations is dependent on being connected, as ours is at present, this seems like a good investment.

A final word: once set up this system is basically automatic, and easy to use. You do not have to be a techie to keep it working. If not everyone aboard has computer skills, this ease of use makes the system even more attractive.

This entry was posted on Thursday, August 9th, 2012 at 12:48 pm and is filed under Cruiser's Tech Talk. Both comments and pings are currently closed.


7 Responses to “Efficient, Versatile, Easy-To-Use Communications: What Is the Answer For Cruisers?”