Towards Rugsund – The Norwegian Scene Gets More Interesting 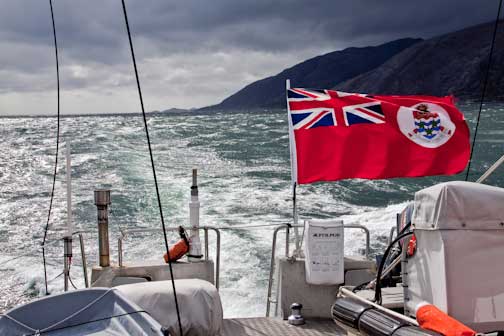 We admit we are visual adrenalin junkies. After places like Prince William Sound in Alaska and the Prince Christian Channels of Greenland, our tastes border on jaded. We love placid weather… for a while. But at some point it feels good to be out in a stiff blow, to see the sky lowering, and squalls sweeping down to leeward. Today the aesthetic and weather meshed, and Norway got a lot more interesting. 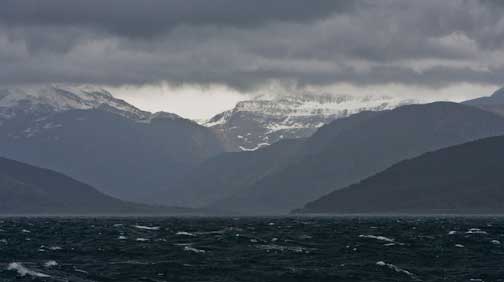 The gale that had us enjoying an anchorage the last few days has bumped up against a Russian high pressure system. Barometer is steady at 1001mb and wind SW 30 to 35 knots. This could last a few more days.

We’ve been surprised by the lack of snow cover although we are told what we have seen is normal. So we are pleased to report that north of 61 degrees there is snow on the mountain tops. The peaks have recently grown in stature, more like what we were led to expect. 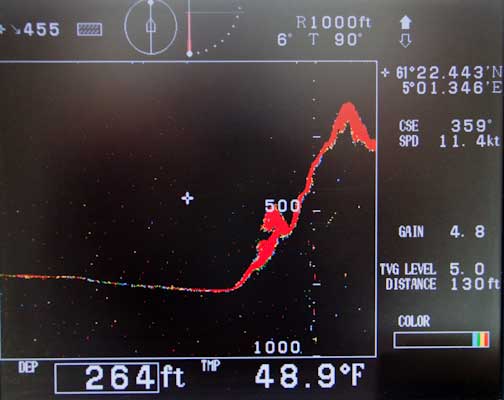 Bottom contours have been mirroring the mountain peaks. It it not uncommon to have the depth finder jump from 1000 feet (300m) to 100 feet (30m) in less than a minute. 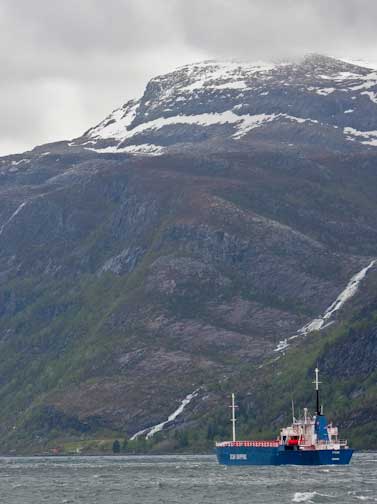 Waterfalls are everywhere. We overhauled this ship as we were coming to a very narrow waterway, so we let him lead the way through. 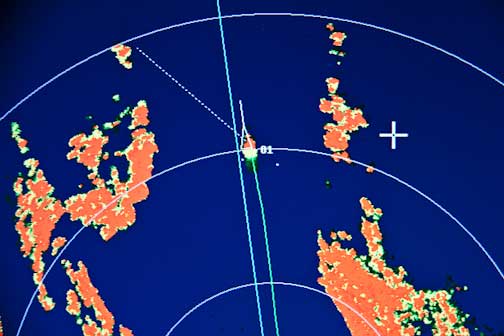 The green trail of the combined ARPA/AIS target is the ship’s route. We figure he draws at least twice our 5 foot (1.5m) draft, so we are comfortable following him down the passage. 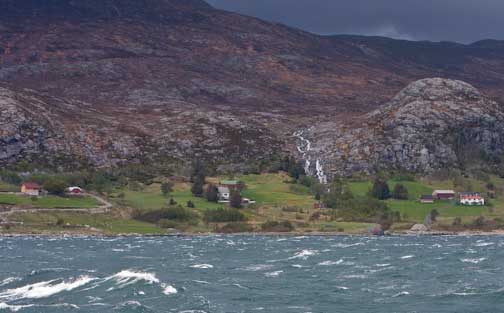 There are small farms dotting the shoreside. You can almost hear the livestock in the fields during the “golden age” of Norway (up through the fifth century BC) when the weather was warmer and growing season longer. After this the weather turned cold again. Maybe there is a lesson here? 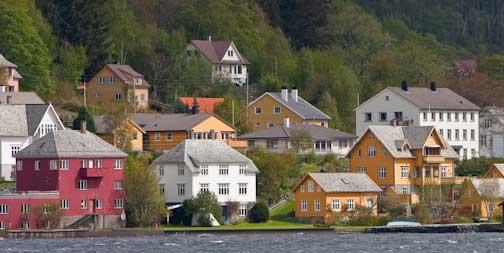 Inviting anchorages and interesting small towns are everywhere we go. We are torn between wanting to explore locally, and the call of the north. So far, the latter maintains its grip. 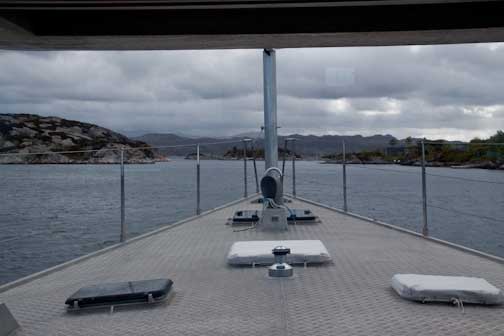 There have been quite a few comments on our use of radar and sonar to navigate, so we will try and include more examples (although when the best examples occur we are usually too preoccupied to grab the camera). The photo above is one of the many dog legs through which we traveled today.

Our normal procedure is to slow down, lower the sonar antenna, and proceed slowly. In this case we are going to jog to port, and the sonar confirms we have a clean passage ahead. 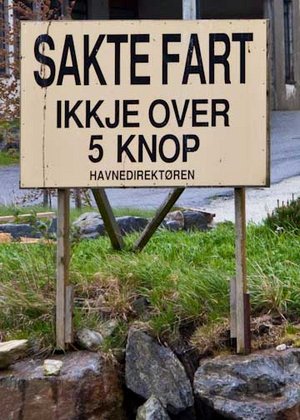 We’re anchored now in an enclosed bay (very tight again) near the village of Rugsund. The breeze is still snorting, and the low clouds and mountains are darkening the sky. Might be a good chance to watch a movie.

This entry was posted on Saturday, May 9th, 2009 at 12:08 pm and is filed under Dashew Logs. Both comments and pings are currently closed.