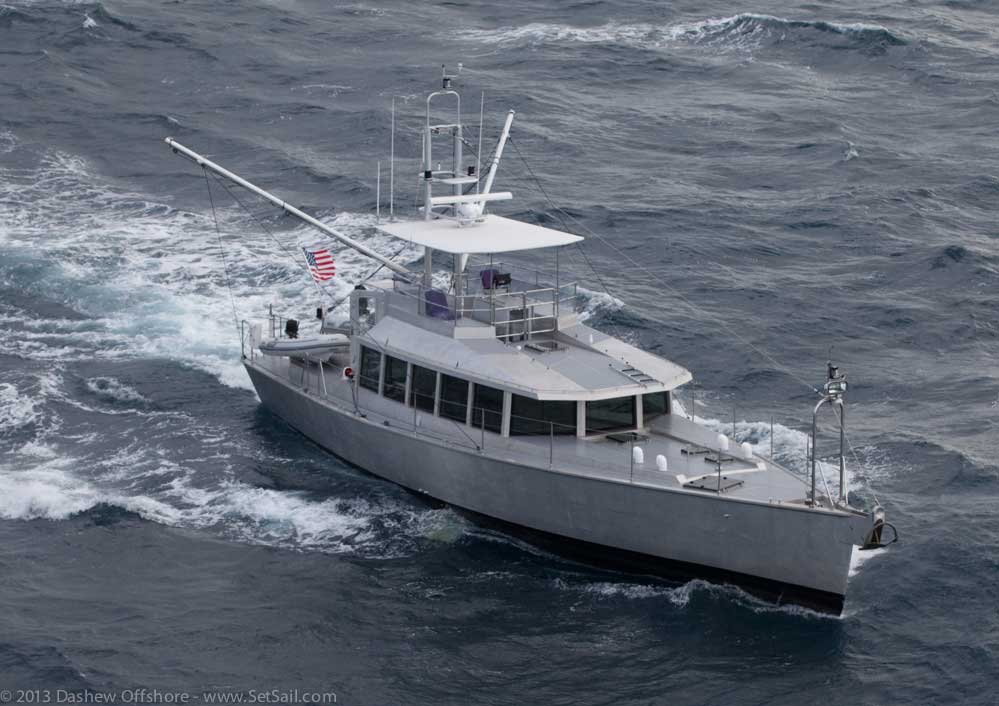 Passaging season is upon us and the FPB fleet is on the move. While FPB 64-6 Grey Wolf nears the end of a quick 4000 NM hop, FPB 64-3 Iron Lady is on her way from Hawaii to British Columbia. The majority of the rest of the FPB feet is getting ready for or have recently completed their offshore passages.

A few weeks ago FPB 64-7 Buffalo Nickel crossed from Fiji to New Zealand. They had a variety of weather – not unusual  for this time of year. Stan Creighton comments:

The boat did fine. We were 3/4 full with fuel, 600 gallons of water in the forward tank, aft water empty. Averaged our usual 9.7 knots.

The conditions established with my own weather planning were confirmed by Bob McDavitt, whom I used again as a router. Nothing odd in the forecast, with the strongest winds on Day 1 up to 25 knots from the SE, then gradually shifting to the W and moderating as we approached NZ.

All in all an uncomfortable trip, but not awful and a pretty typical Tasman Thrashing. My greatest joy on the trip was realizing that I didn’t have to slow down in the crappy weather. Aboard our last boat I would have been slowed to 6 knots and that would have extended the discomfort by at least two more days. This, to me, is one of the great advantages of the FPB.

Last week FPB 64-9 Orca made the trip from New Zealand to Fiji with a stop at Minerva reef. This is Orca‘s first ocean passage. 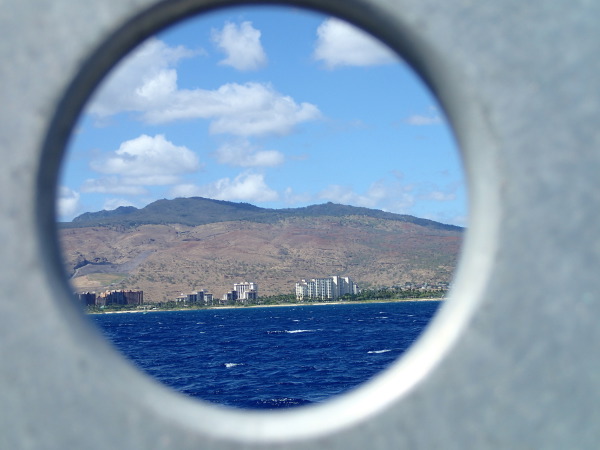 As this is being written, FPB 64-3 Iron Lady is on a 2400 NM passage across the North Pacific. Pete Rossin has been sending us performance data:

I was scheduled to leave Pittsburgh on May 13 (should have known better).  Left for the airport at 0430 and after 6 hours of creeping delays, US Scare canceled the flight. No other flights on the 13th so left on the 14th. After a 20 hour slog, made Honolulu and Iron Lady at 10 PM local.  Rick’s forecast looked good for departure on the 15th so we made the call to go.

On board for this trip are Capt Steve Parsons and Capt Roger Girvin – both Kiwis, captains and good mates at sea. Roger was with Steve and me for the NZ to Tahiti passage last year.

I tried to sleep but finally gave up at 0400 local and went about unpacking 2 large duffels of mostly boat stuff and doing some boat stuff along with some boat chores.

Steve and Rog were up at 0700 and after coffee, Steve was off to take the rental car to the barn while Rog and I prepared for departure. We threw the lines at 0910 and at 0800 today (the 16th) Ko Olina is 182 miles in the rearview mirror.

The passage up the lee shore of Oahu was delightful but mother nature reminded us who was boss when we cleared the north end. NE trades were blowing 15 to 20 right on our nose along with 2 meter seas – not bad sounding but the relative period (period noted as the boat moves thru the water) was just 2.5 to 3 seconds – lots of pounding so we pulled the throttle back 100 RPM to keep things sensible. That lasted until the wee hours of May 16 and accounts for our low average speed of just over 8 knots.

Winds and seas died overnight and we are now back to our normal cruise of 10 knots with about .5 knots of adverse current.

Winds holding steady SSE at 10 knots and barometer is rising – 1023 now. Sounds like high is building and we are motoring into the center of it. Hope it holds true – it is lovely. To hell with 35 knots on the nose – 20 with short period 2 meter seas was bad enough. Lots of crashing – boat couldn’t find her footing. That is why we bore off a bit and slowed down. Holding around 10 knots at present.

Fuel burn is 22 liters per hour average at 1700 RPM, engine loading is 60%, alternator output around 100 amps at present.

Beautiful day in the neighborhood, unfortunately Shabby (our favorite lure) has come up short on fish. Was scared out of the water yesterday by a 6 foot shark.

Strange thing – we have seen 5 free floating buoys over the last 2 hours, all parallel to our course in the same position to port – some orange, some white. Have altered course a bit to starboard to get clear of them. 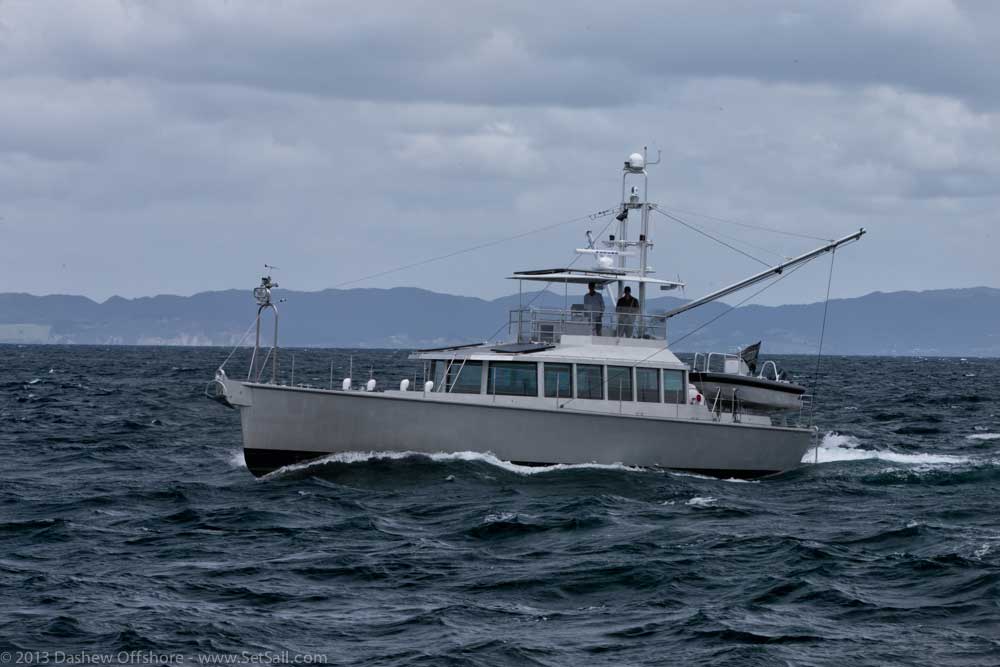 FPB 64-6 Grey Wolf is a day out of Panama, having traveled almost 4000NM since leaving Nuku Hiva 17 days ago and more than 7500NM in the two months since departing New Zealand in late March.

Peter Watson answers a series of questions from on board, which you can see on the Berthon’s website. A few quotes from the interviews follow:

Tom asks – How is the experience of the GREY WOLF trip affecting your views on the specification of your new FPB 78?

Peter responds – It’s made for a far deeper understanding of Steve Dashew’s design principles. Steve has been great to work with and is very open to ideas that will improve the design, but it’s crystal clear that, fundamentally, his concepts are right for the type of boat this is. Appreciating the difference between ‘things that are nice to have’ and ‘what is essential’ is critical for any owner. All I can add for the new boat are small refinements that fall into the ‘nice to have’ category.

Thinking for a moment about weather, how we are receiving forecasts and any routing advice.

We are in touch with Weather Bob every couple of days. On this long leg he just advises us of any slight changes as he sees them coming, but he’s always there to answer questions. Having him on hand helping us is of huge value because he can keep a more precise view of a far larger area than we ever could. Being ashore, he is in a position to use a solid internet connection to acquire all manner of data. We don’t have anything like that level of downloading power. All that having been said, weather models for the Pacific at the present time are not as good as their Atlantic equivalents, so it’s reassuring that we have some sound, basic weather knowledge on board. Between us, we can still make sense of things when what is predicted isn’t what really happens.

What I really love is the boat’s comfort in the sort of seas into which I would not normally consider taking a motor boat. She glides happily through a force 6 as if it were a force 2, and her broad spectrum of backup systems gives the crew total confidence that if any problem develops out at sea there is always an alternative waiting for deployment. The original issue can then be set on one side, to deal with at one’s ease in the next safe harbour.

The boat does exactly what Steve Dashew says it does: Long Range Motor Cruising in comfort. 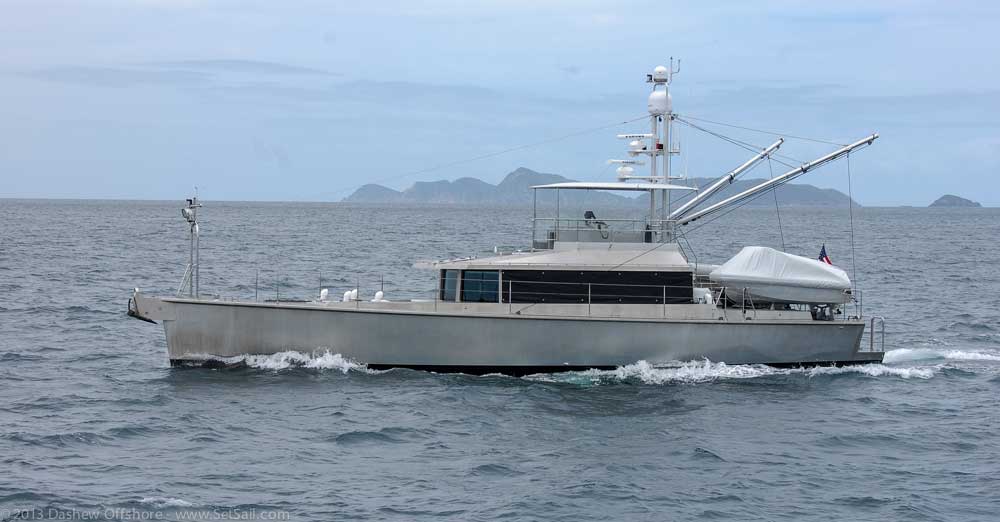 In the next few weeks FPB 64-5 Tiger will head back to Fiji and then further west to explore new territory. FPB 64-8 Atlantis will head for New Caledonia. Meanwhile the much traveled  FPB 64-1 Avatar has arrived Neah Bay at the entrance to the Straits of Juan de Fuca. Carol Parker writes:

Overnighting tonight at anchor, fishing tournament so no marina space plus a waiting line at fuel dock so no cheap fuel!  Tomorrow going to Port Townsend and spending 2 nites there. Leaving Pt. Townsend early Monday morning arriving at the locks about 11 a.m.

Watching AIS looks like Sarah Sarah is in Pt. Townsend as well!

Carol has a post up on the first part of their trip with her usual stunning photos.

Completing what will be a trio of FPB 64s in the Northwest this season, FPB 64-2 Sarah Sarah is currently at Shilshole Marina in Seattle.

This entry was posted on Saturday, May 17th, 2014 at 6:07 pm and is filed under Dashew Logs, four, FPB 64 Passages, The Logs. Both comments and pings are currently closed.