AIS A or B – A Disturbing Discovery 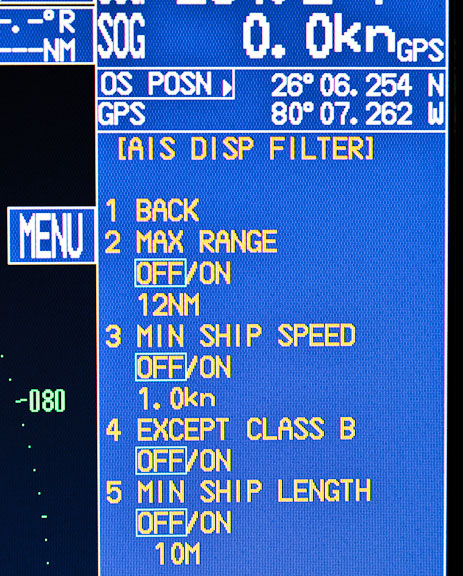 We have been slowly discovering the changes in the software on the Furuno 2117 radar, included in our recent upgrade. This is an IMO class piece of hardware, in other words, used on commercial vessels, and as such the interface must conform to certain international standards. The screen shot above is in t’he AIS display filter menu. Note the comments on class B AIS and minimum ship length.

We understand the reasoning, reducing clutter on the radar screen in waters crowded with AIS B equipped yachts. And the odds are most professional mariners would use this feature. The big question is will they change it back when offshore? We guess not. So, if you are trying to decide between AIS A or B, keep this in mind. With B it is safest to assume you will not be showing up on most ships.

Post Script: See Ben Ellison’s comments – it appears that we have misinterpreted this. We found a page in the Furuno 2117 manual which says:

Any targets entering the zone will be automatically acquired.

When a target enters an acquisition zone, the buzzer sounds and the indication

TT NEW TARGET (or AIS NEW TARGET) appears (in red) in the Alert Box. The

symbol of the offending target is red and flashing. Further, the AIS display is

automatically turned on if it is off.﻿

We will test this in the real world when we are next aboard. We hope Ben’s interpretation of the above is correct.

Second  Post Script: this issue is far from settled and we are awaiting response from Furuno. But as of Friday the 15th it appears you can disable AIS B targets.

This entry was posted on Tuesday, December 14th, 2010 at 7:23 am and is filed under Dashew Logs. Both comments and pings are currently closed.


9 Responses to “AIS A or B – A Disturbing Discovery”