Now let’s have a more detailed look at what may end up being our favorite area on board: the Matrix deck. 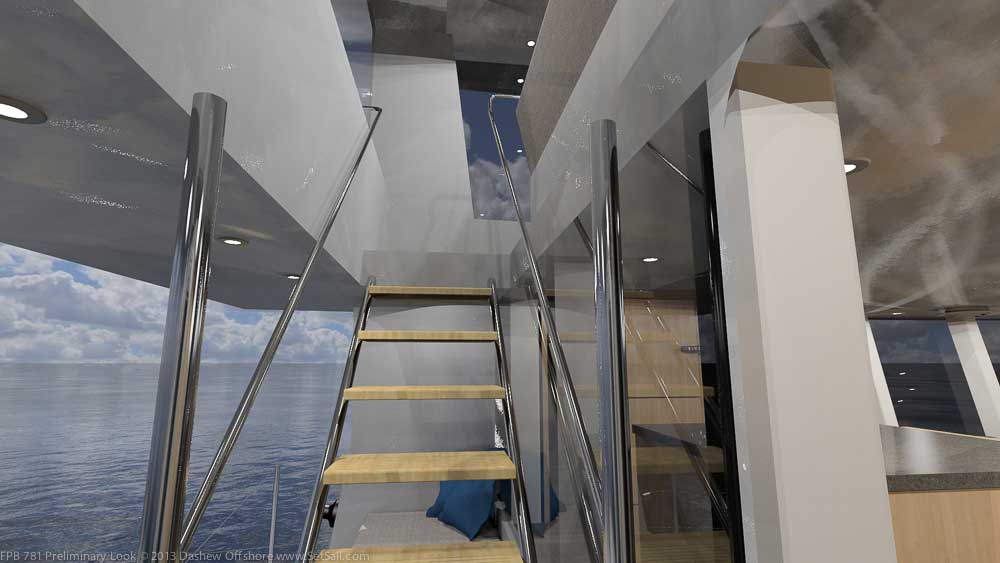 The Matrix deck is evolved from the same area on the FPB 97, refined for our needs based on a season of living with a much smaller model on Wind Horse. Access to and from is under a fixed roof, dry in almost all conditions. In cold or wet climates, we may decide to fit a back curtain across the aft end of the great room roof overhang to give us additional protection. 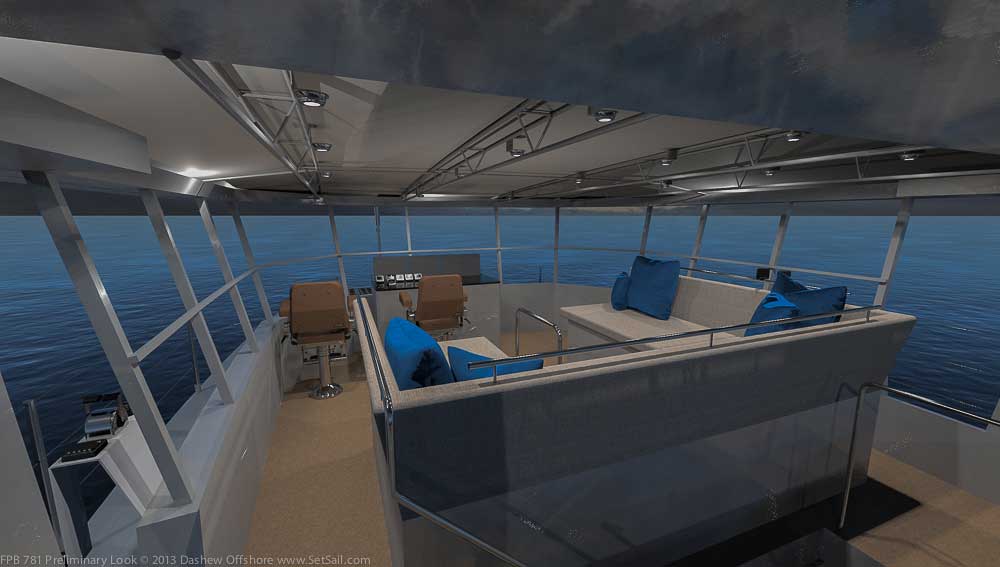 The area in the Matrix deck is more than double that of Wind Horse or the FPB 64. After much discussion, the enclosure system will be similar to what worked so well on Wind Horse, solid acrylic plastic to just beyond the horizontal bar, and then the Clear View window system above. 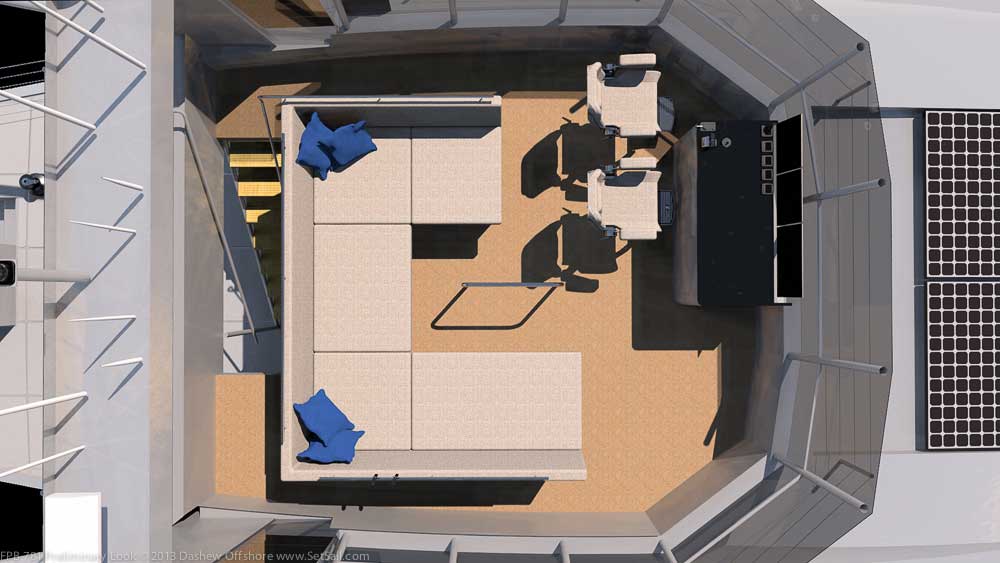 Our seating will be wider than before, making this an exceptionally comfortable area for lounging or watch standing. Fully enclosed, we expect this to be a favorite location for the grand kids to sleep when they visit.

The seating arrangement has several other advantages. It provides a walkway around the perimeter, helpful for window operation and maintenance. And the additional distance from seating to roof edge gives us better shade at low sun angles. 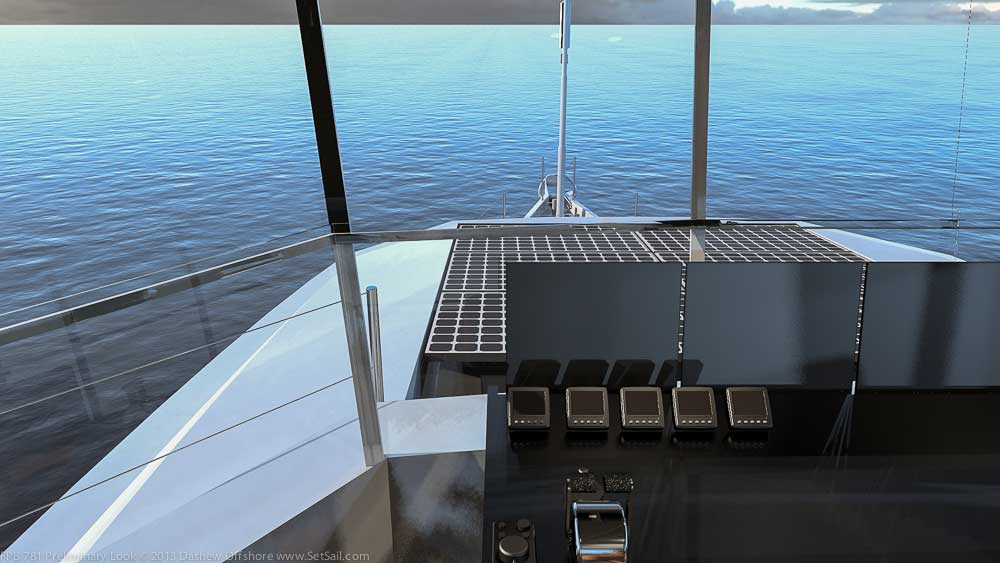 Both the starboard settee and port helm chairs are situated so that Linda has good sight lines forward. In this case, the camera is at an elevated seat eye height. She can see close in under the bow when seated. If optimal visibility is necessary, we would stand up close to the windows.  In this case, it is possible to wedge ourselves in place between coaming, plastic panels, and navigation desk. 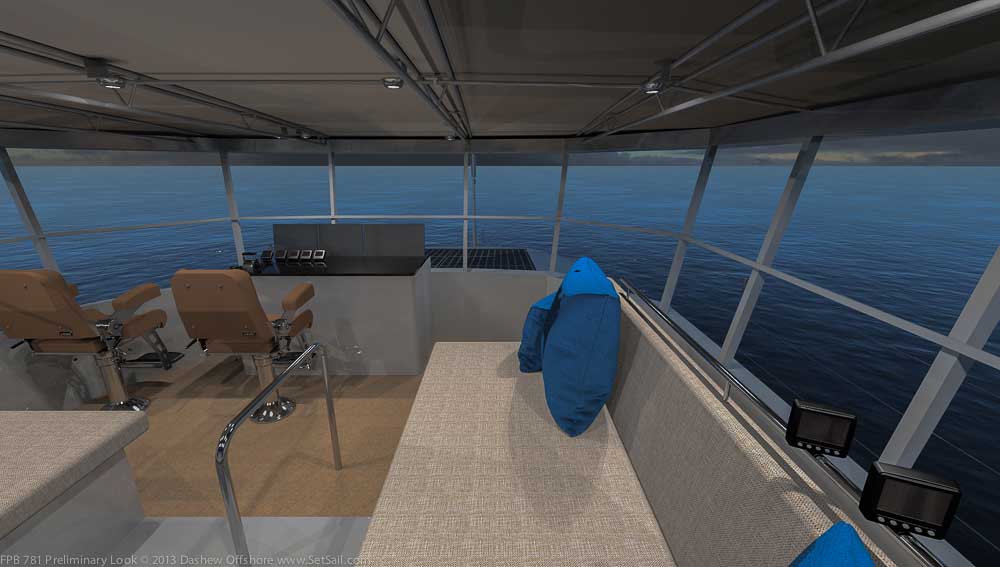 This view, from the starboard corner, is also rendered at Linda’s eye height when she is seated. The handrails on top of the seat backs will be handy offshore. There are two rail-mounted Maretron displays, each of which can provide up to four lines of data. These allow us to monitor vessel systems and navigation data while seated in this most comfortable of watch stations. 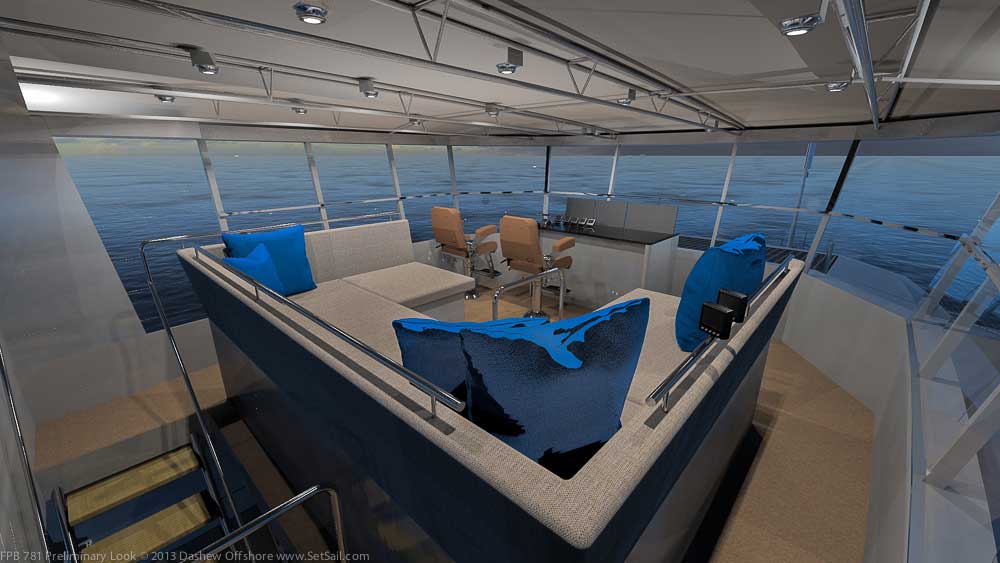 Now a wider view from the aft starboard corner. The coamings and navigation desk will be in aluminum to provide a visually contrasting foundation for the fabrics. We will be using a pipe frame roof, with Stamoid fabric. The ladder trusses that support the roof are both structurally efficient and provide a system of overhead handrails throughout. Aside from functionality, we think this “loft look” will be very cool aesthetically. 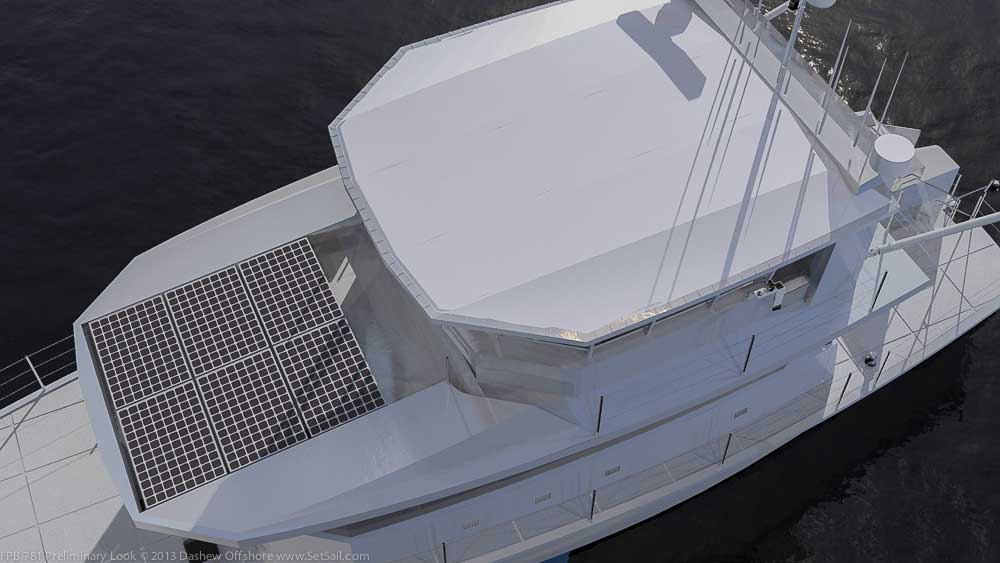 The Stamoid roof is laced onto the surrounding framework, making removal, if required, relatively simple. 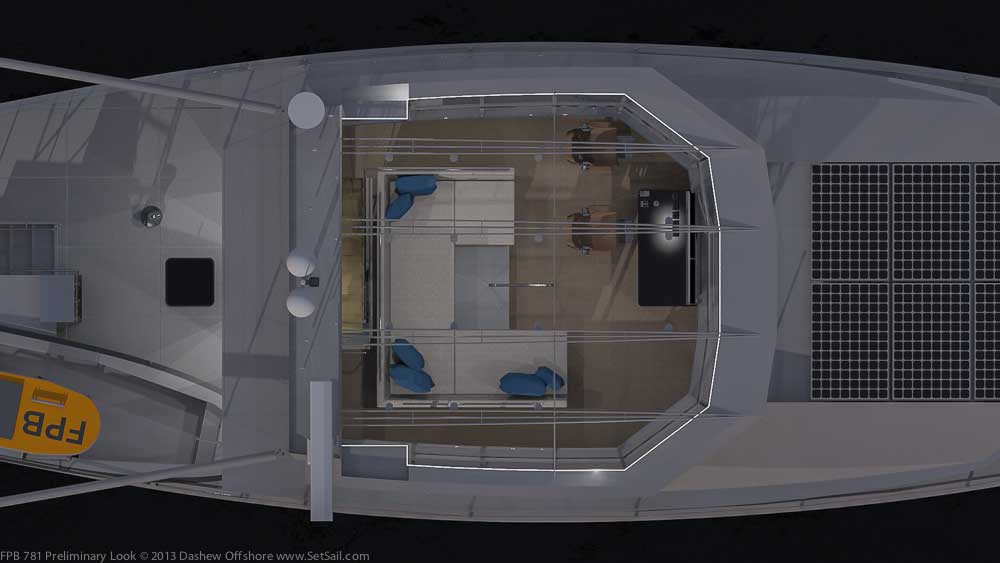 The lacing itself is on top of a surrounding structure, where it is hidden from view. In the rendering above we’ve removed the Stamoid roof to reveal the support system. 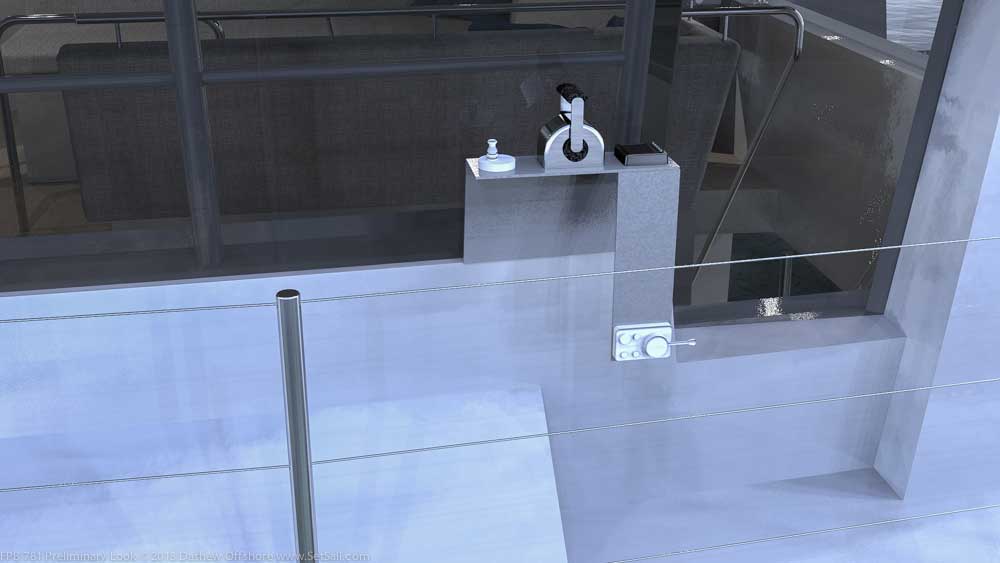 There is a port side docking station to make snuggling this Dream Machine into tight situations more efficient. 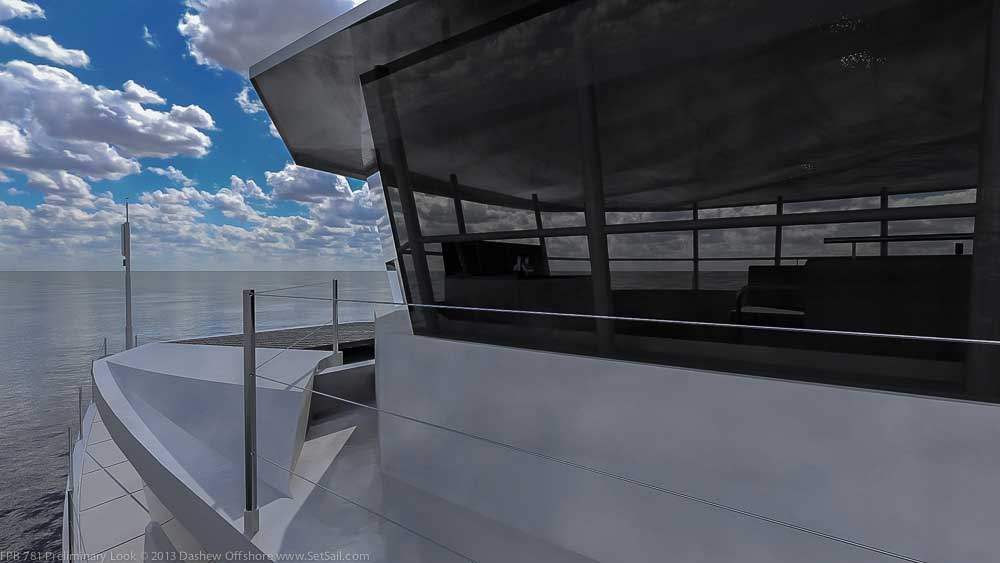 Finally, we really like the ability to walk around the perimeter of the Matrix Deck. 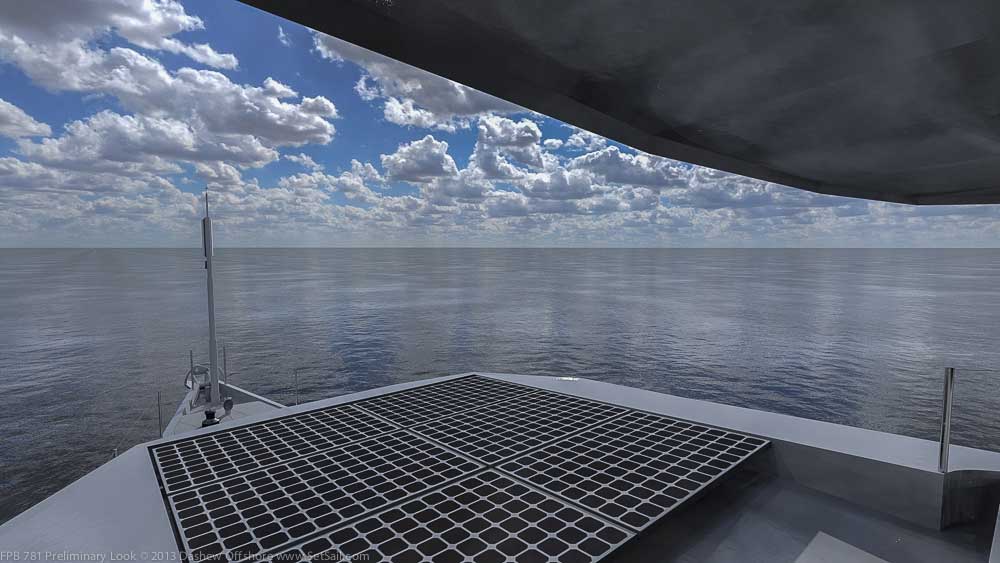 It makes window maintenance easier while offering up a variety of photographic options. 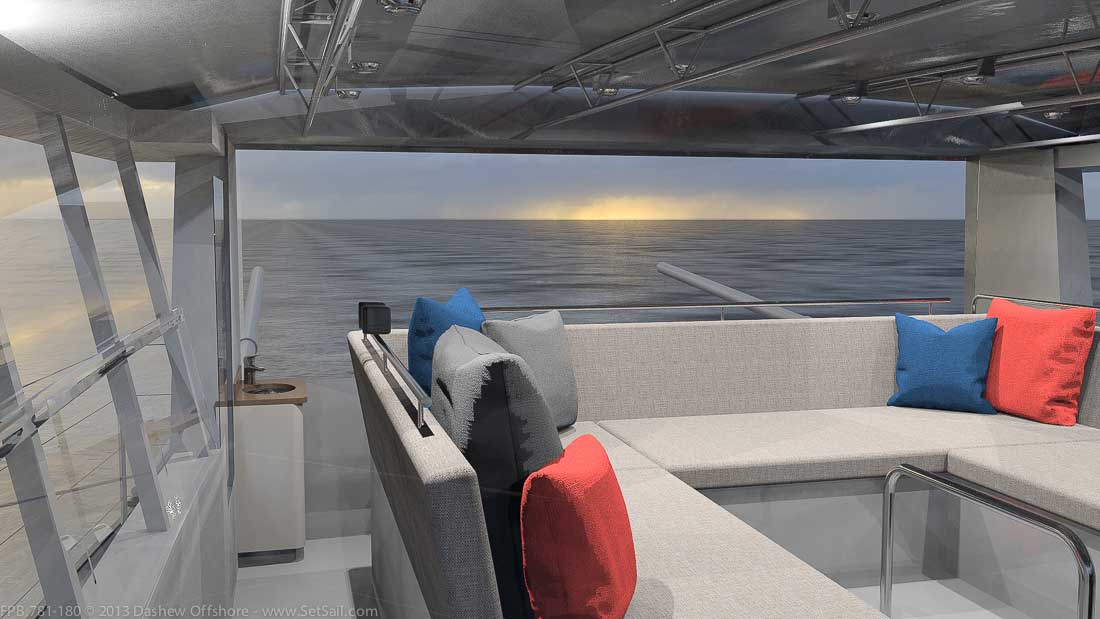 One issue we’ve wrestled with is whether or not to have a day head, and if so, where? 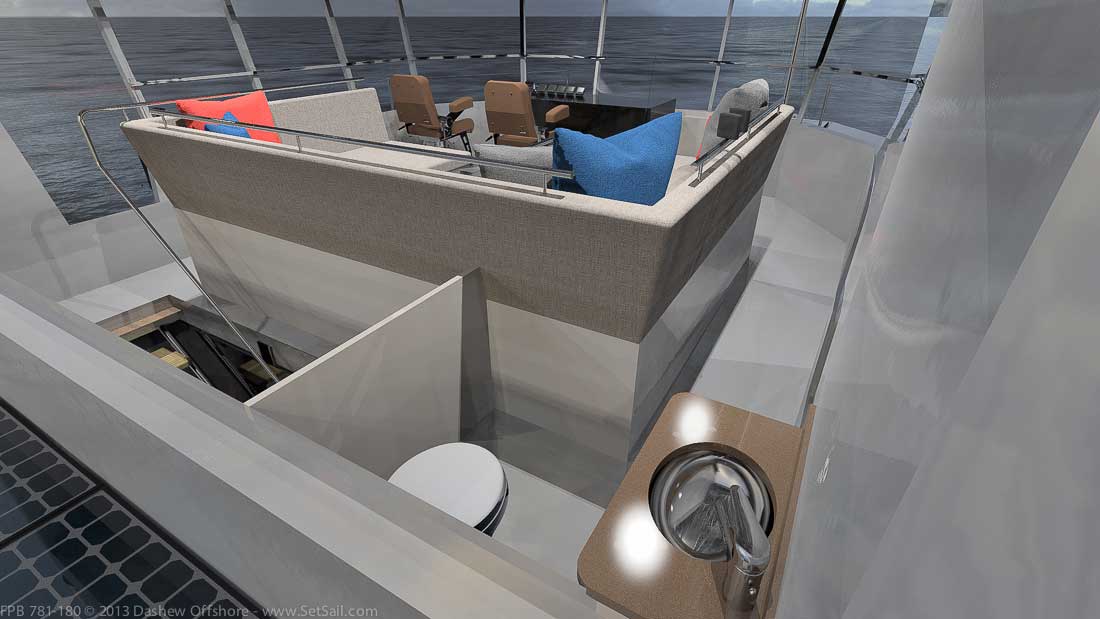 The key question is, who is going to use this, and when? We had decided not to fit a day head, and then changed our minds after discussing it with an old cruising friend. He made us realize that it would be very convenient to have a head that could be used easily when alone and on watch in this area. If we’re alone, then we don’t need an extra privacy enclosure, which blocks sight lines. If we’re not alone, and privacy is desirable, then there is someone else to keep an eye on the helm while one of us goes below.

When the head is in use, there is still a degree of privacy, afforded by the mast, the solar array, and the raised settee forward.

This entry was posted on Saturday, June 1st, 2013 at 4:27 am and is filed under FPB 78. Both comments and pings are currently closed.