FPB 78: Dreaming Up A Better Way to Launch and Retrieve the Dinghy 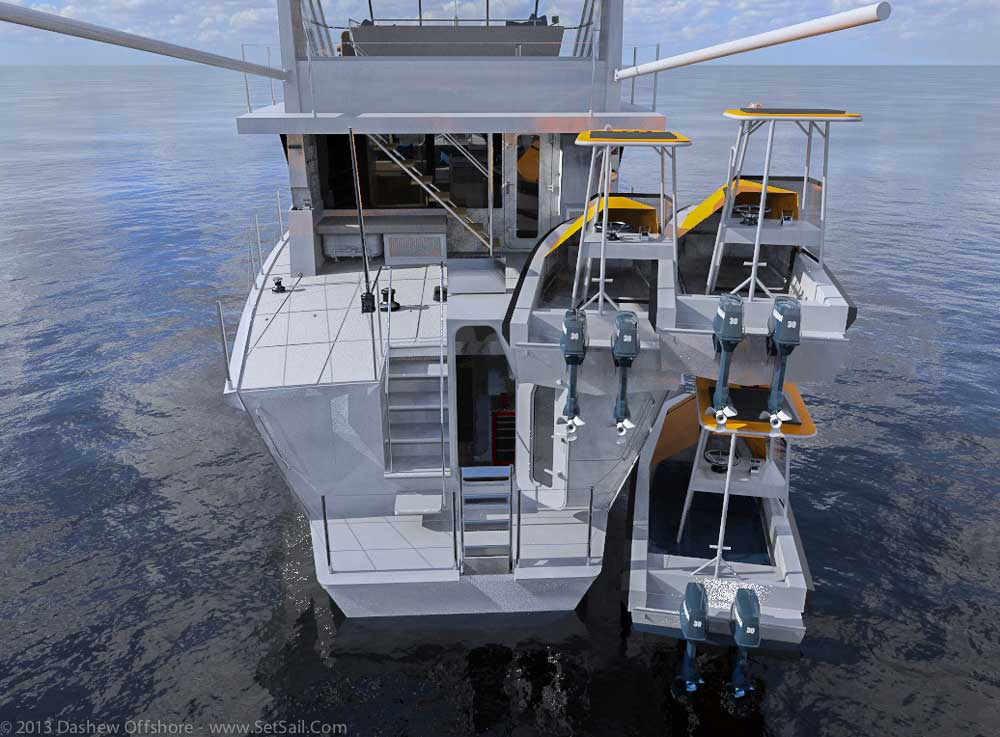 We feel that the most dangerous operation on any motor yacht is dinghy launch and retrieval. This applies to our FPB as well, even though our approach, with the dink on the main deck, is much easier (and we think safer) to handle than most. The heavier the dink, the bigger the risk, and this new dink is considerably weightier than our old, trending towards 1200 pounds/550kg. So we have been fiddling away at a better handling system since the beginning of the design cycle. What follows has been adapted from the approach being considered for FPB 97-1, and represents what we think is a step forward from where we have been in the past.

The FPB 78 aft deck design has evolved from these renderings, but we expect the launching procedure logic to remain the same.

Before getting into the details, a few parameters: 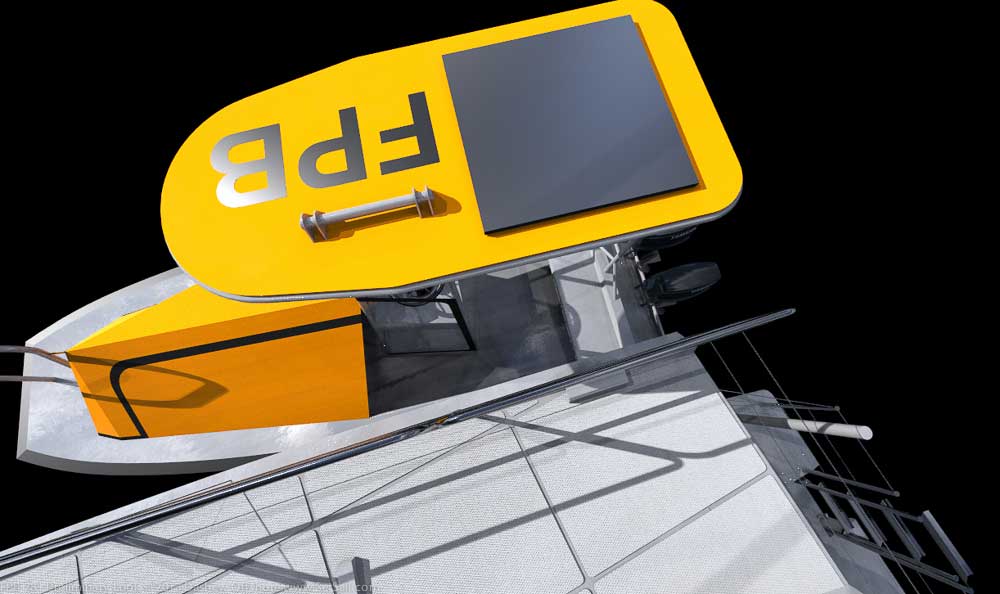 We will start with the dink alongside, ready to hoist. The dinghy halyard will be attached to the horizontal pipe on the t-top, via a strap. With the t-top at just above the belting we can lean over the railing to attach the halyard or squeeze between the rails if required. 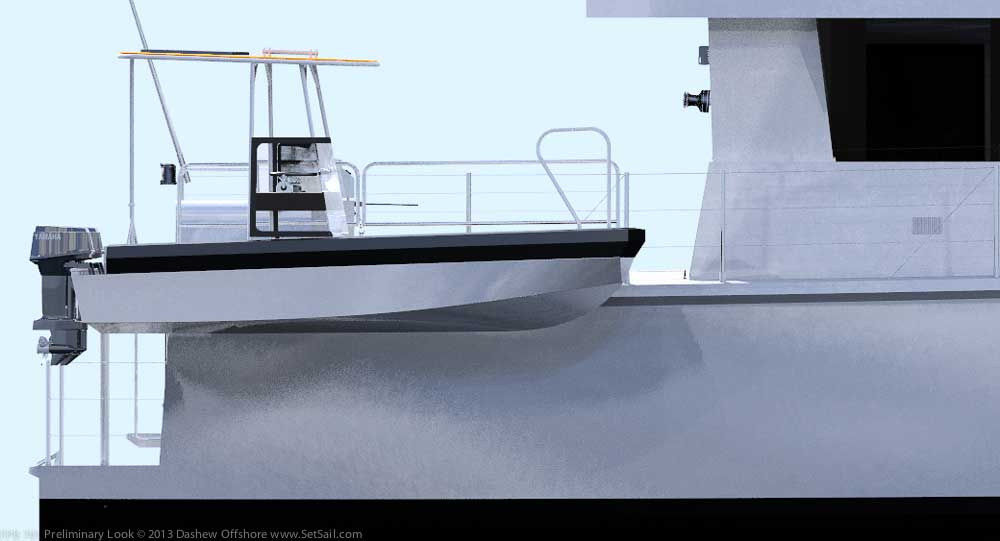 The dink is then hoisted to where it is still below the mothership belting (toe rail). 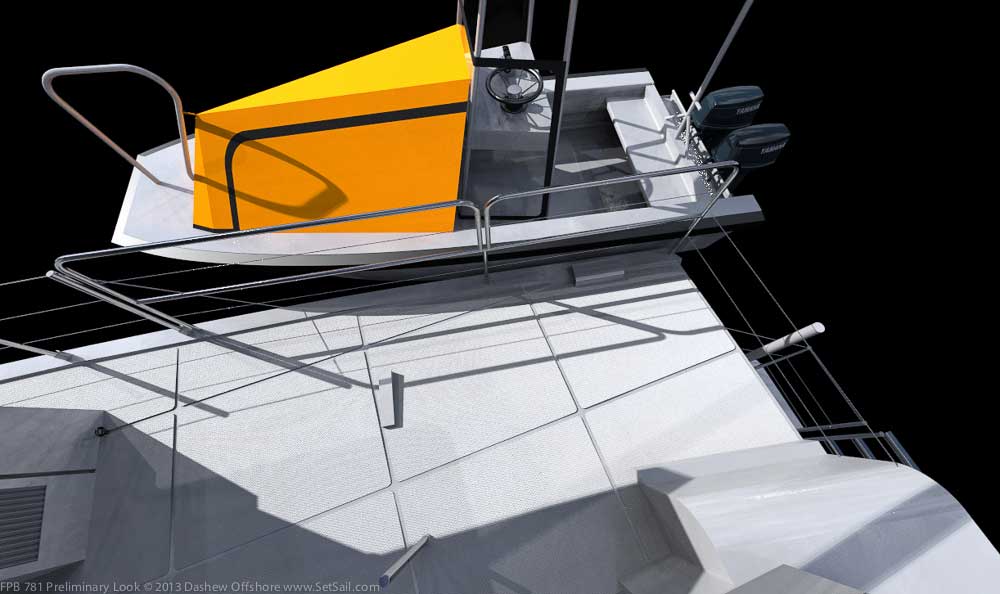 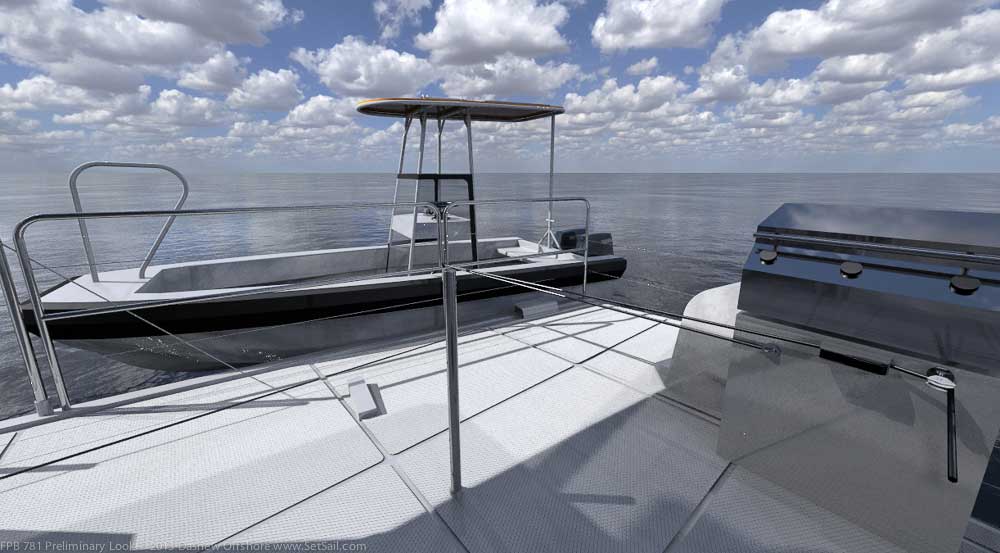 Here is where things get interesting. We then connect a two-to-one tackle arrangement to the dinghy, with a snap shackle on a single block. This gives us a 2-1 purchase with which we can control the dinghy swing, and pull it inboard with a bit of leverage. 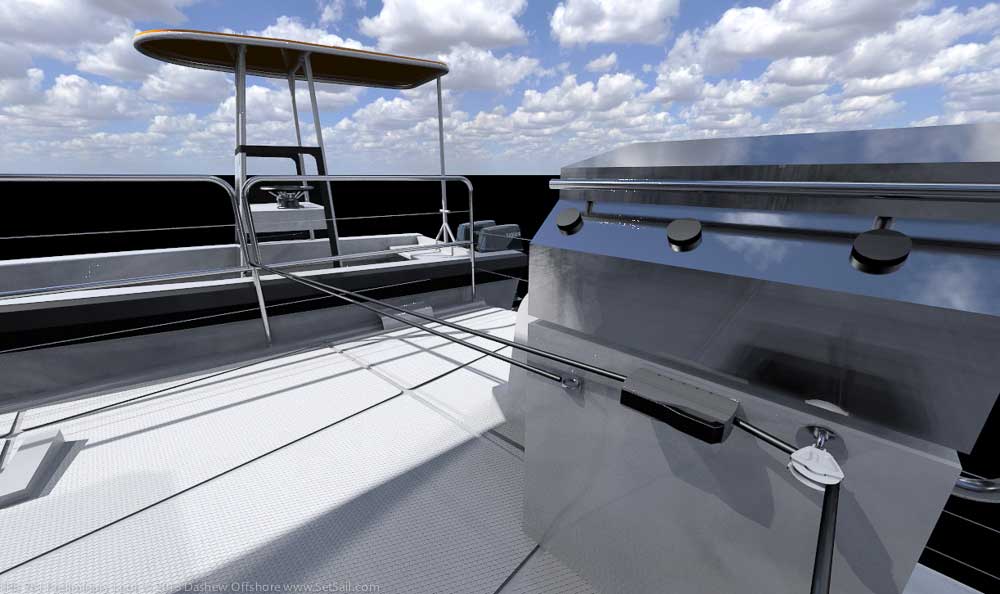 The control line, an FPB equivalent of the Barber Haulers we used to adjust our jib leads half a century ago (named after the Barber brothers of Flying Dutchman fame), is dead-ended on the aft scuttle, then runs through a snatch block/snapshackle affair on the dinghy rail, after which back to the scuttle and through a Lewmar rope clutch. The block shown bottom right will help us use this barber hauler from other areas on the aft deck. 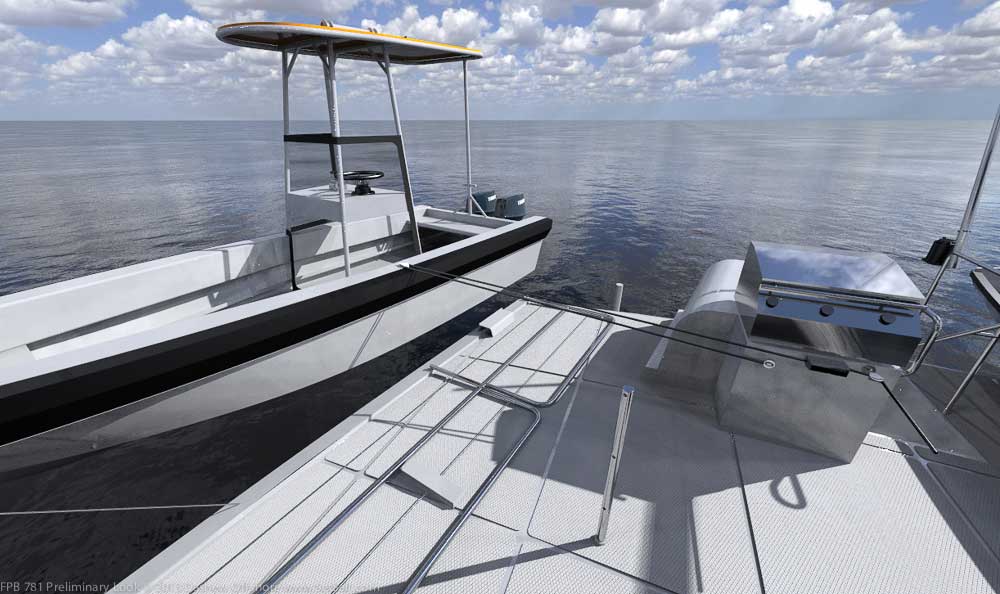 Now we pull a couple of pins and fold down the staple rail. 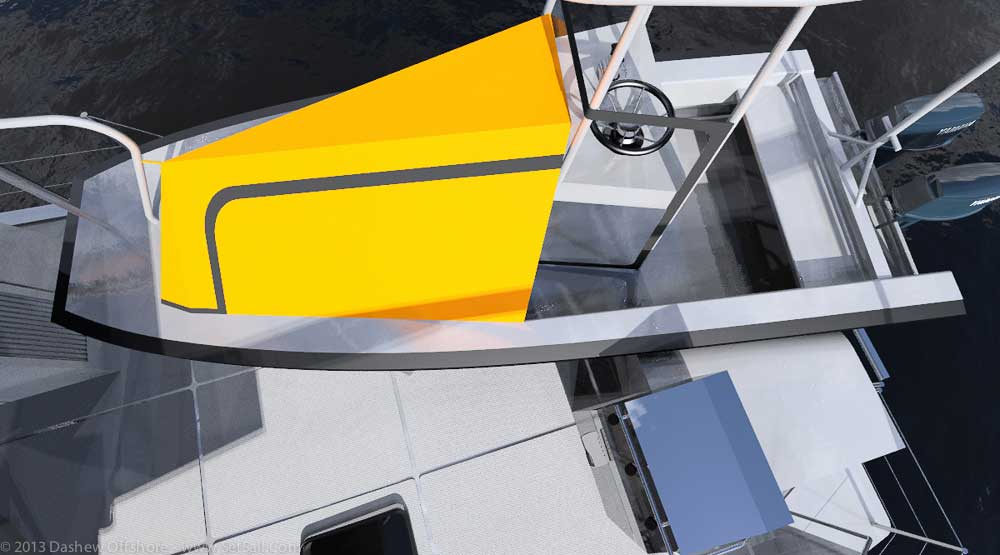 If the boat rolls to port, and the dink swings in, it will be stopped by the stanchion shown center right in the previous rendering, and by coming up hard against the scuttle. Tailing the control line through the rope clutch as the boat rolls to port takes up slack and prevents the dink from rolling away to starboard when the mother ship rolls back. Once the dink is on the chocks, and the control line snugly tightened, the dinghy cannot move. We can then take our time getting the seagoing lashings set and securing the boom guys. 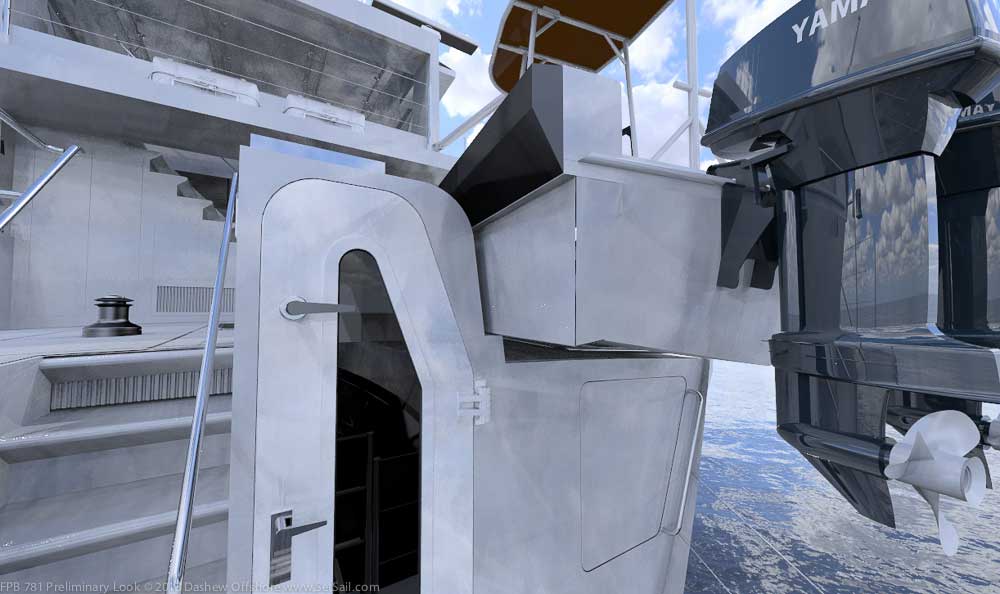 The chocks are a big part of this design concept, as are the folding safety rails. Both are what enable us to launch the dink with minimal lifting off the deck. 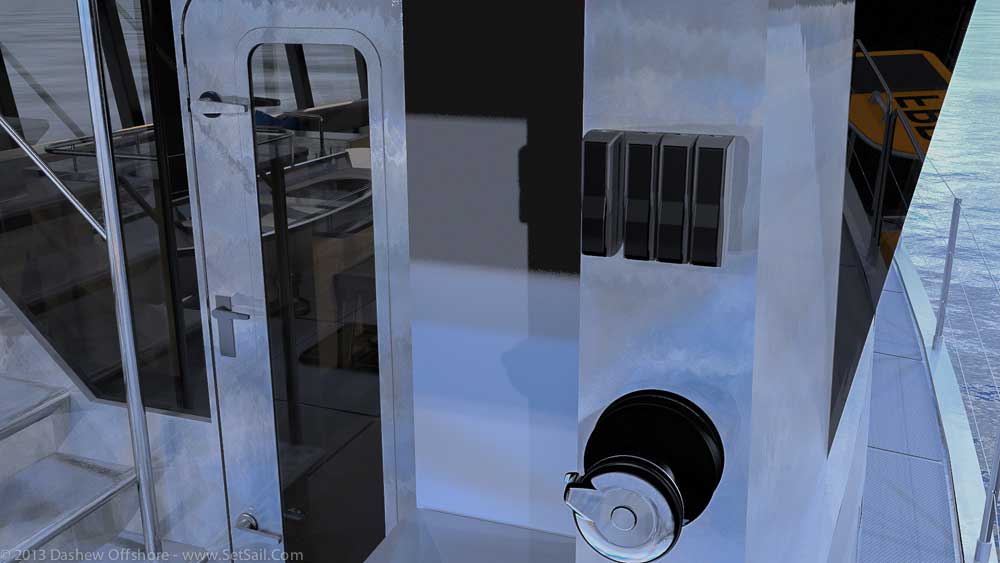 Now a word on control of the booms, and winch operation. There are four lines per boom with which we have to deal on the new FPB 78. These are now brought to a bank of clutches on the aft side of the masts. These are the fore guy, after guy, dinghy halyard, and end of boom halyard for flopper stoppers. 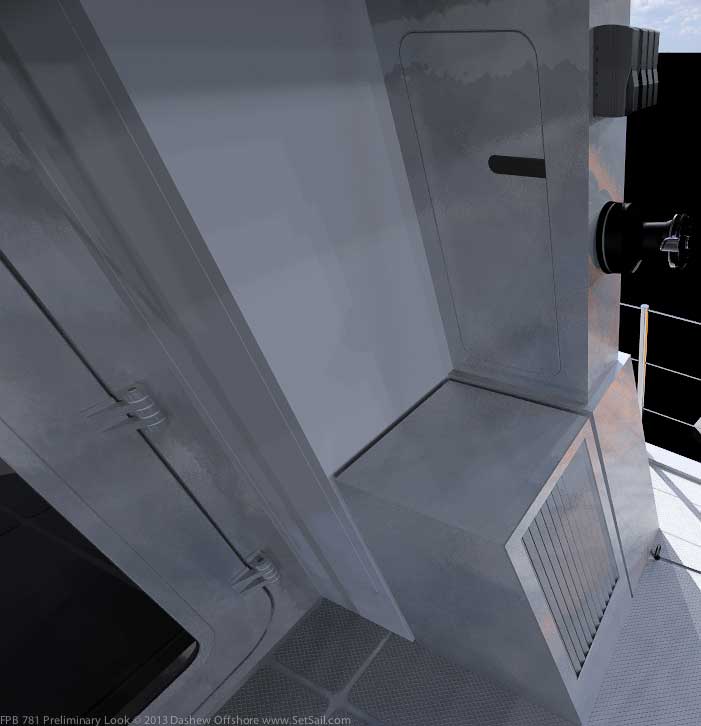 We want somewhere to neatly store the four lines per side. That is where this mast locker door, which leads to a rope tails storage locker, comes into play (the tails slip through the slot in the door).

The launching sequence is much simpler than the past, as the off center dinghy weight heels the boat as the boom is eased out. The sequence with the new system is as follows:

We are guessing the entire process, up or down, will probably take two to three minutes in calm conditions.

There are four keys to this concept:

Now, we just have to wait a while to see how this works.

This entry was posted on Wednesday, June 12th, 2013 at 1:59 pm and is filed under Dashew Logs, FPB 78, three. Both comments and pings are currently closed.


27 Responses to “FPB 78: Dreaming Up A Better Way to Launch and Retrieve the Dinghy”