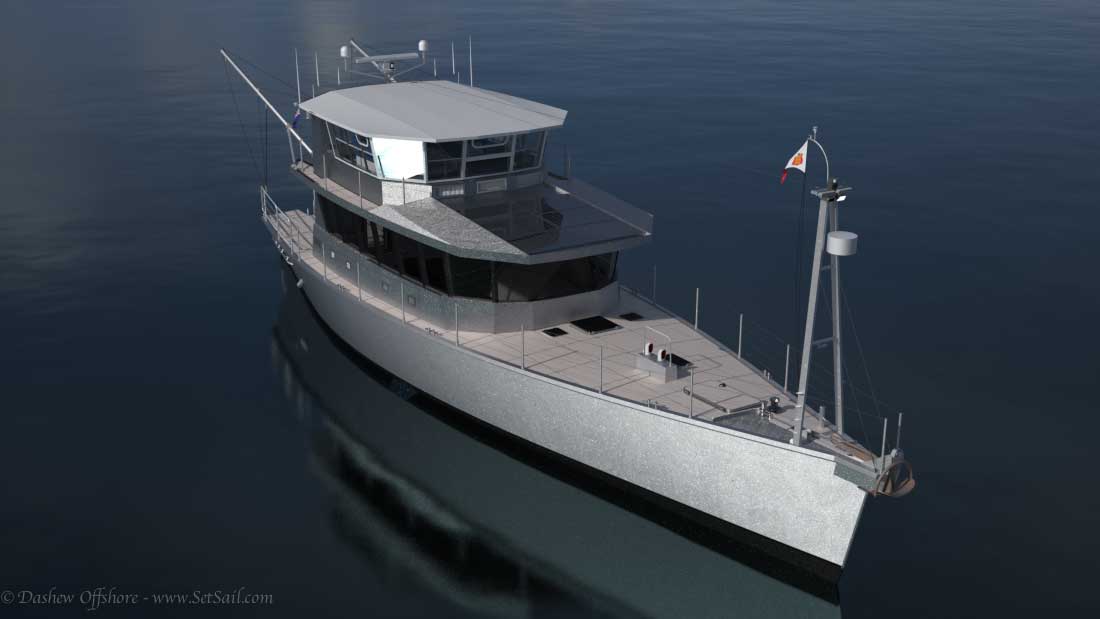 With the design and engineering cycle for the FPB 78 Series nearing completion – it has been two years and over 16,000 man hours since we started this process –

bandwidth is now available to bring you up to date. 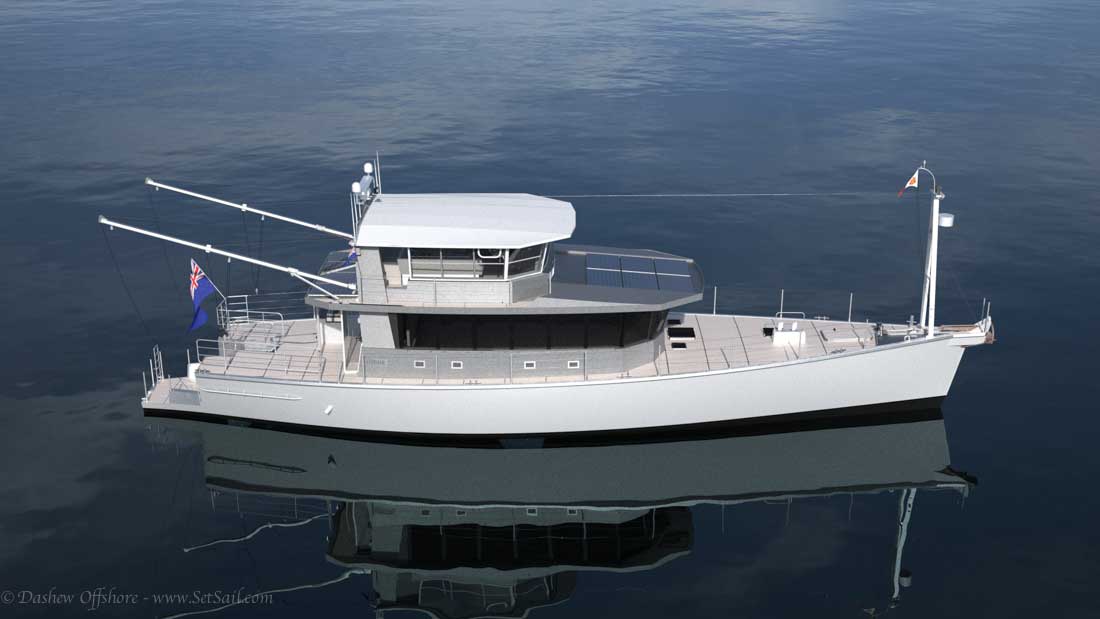 There are numerous refinements which we will discuss in a series of posts, starting here with a brief overview of the exterior. 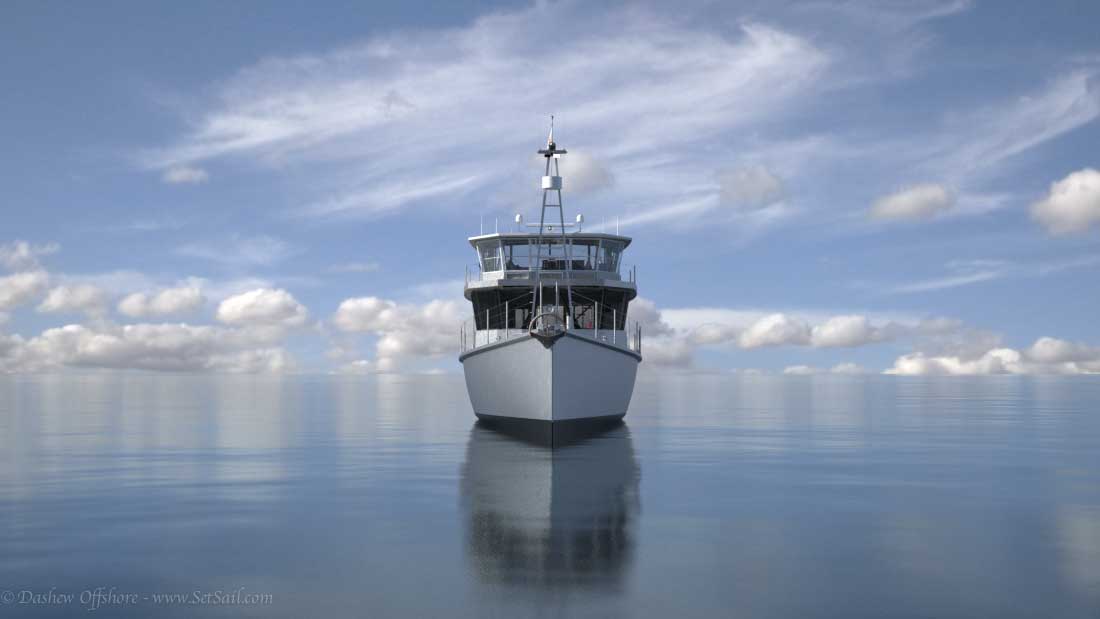 The forward mast has evolved into an A-frame, which has numerous advantages: 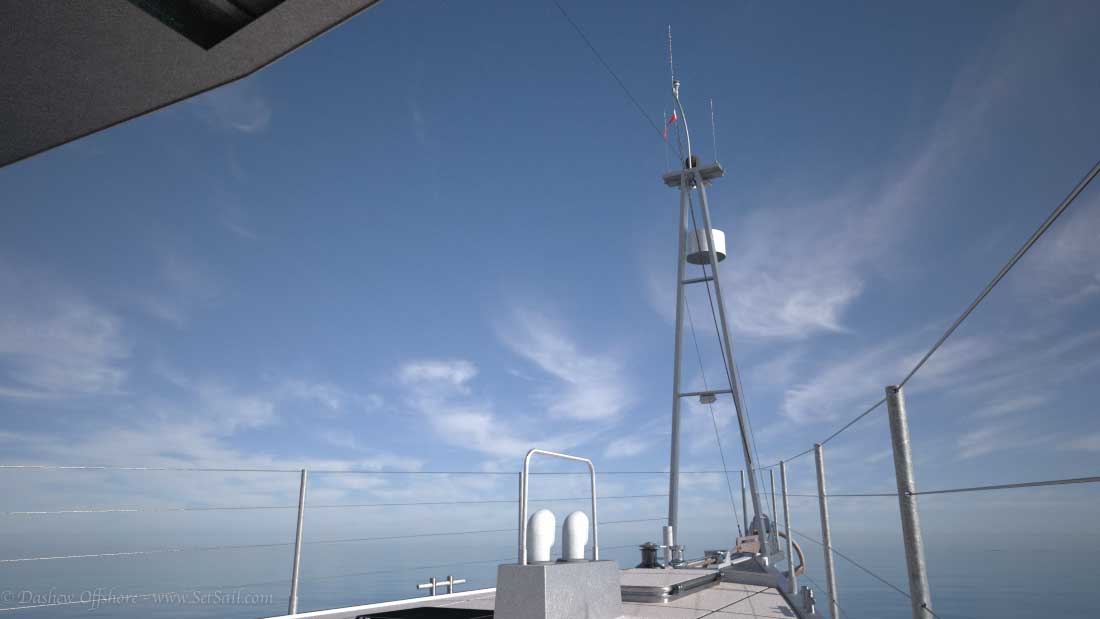 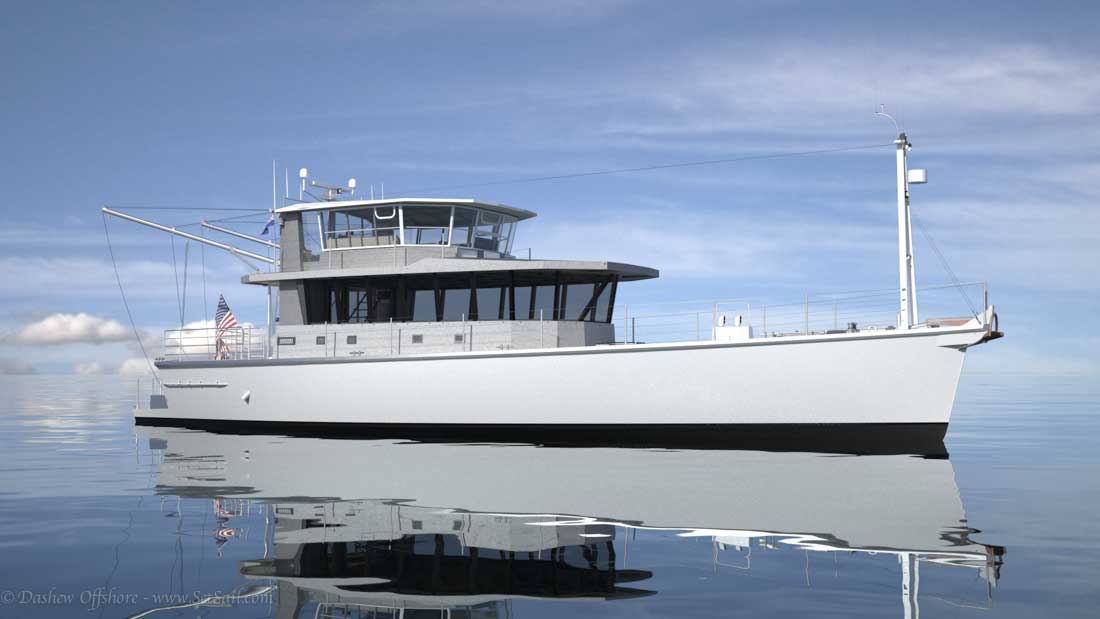 The aft antennae collection has evolved as well. 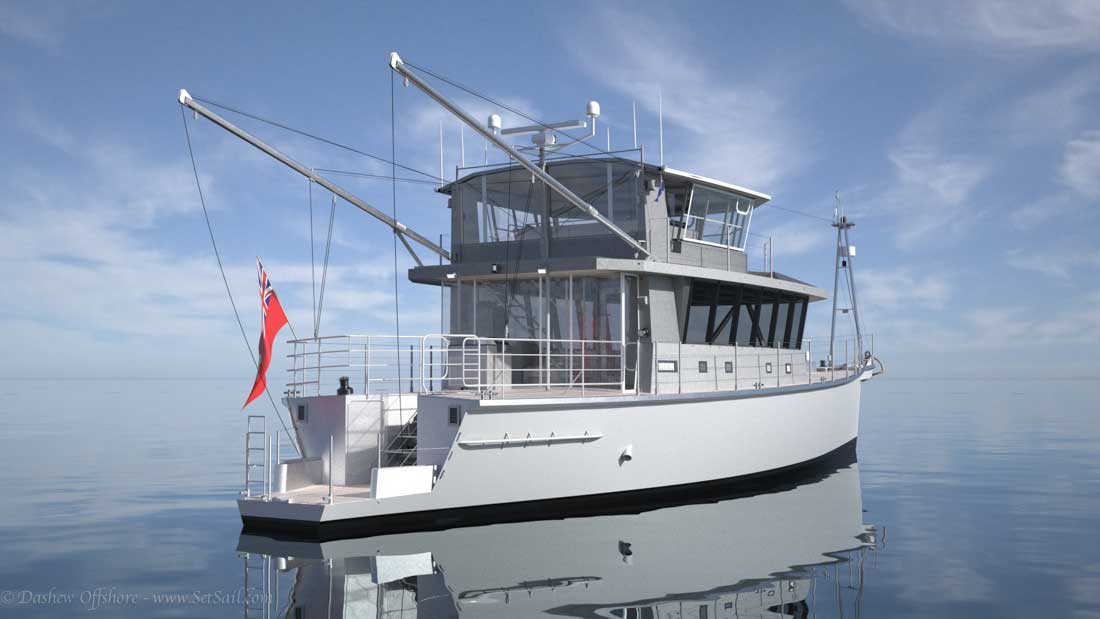 There is a hinged central “mast” which carries the main open array radar and the sat com/tv antennae. Maintenance on this gear will be simplified when you can work on it from deck level. 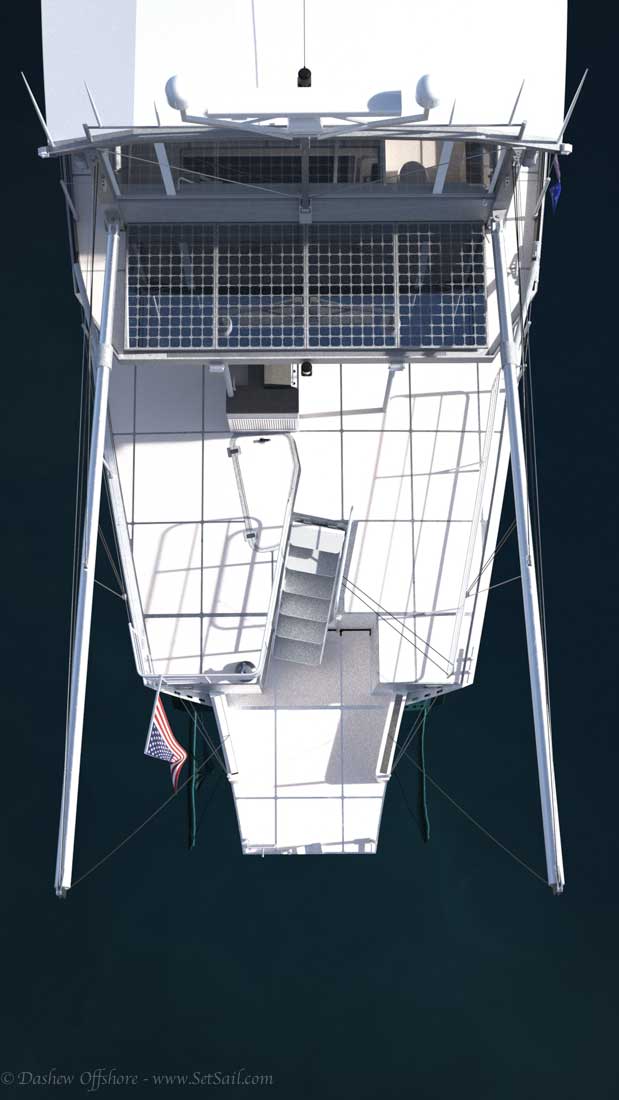 The boom design has been solidified and rigging details worked through. The booms now project outboard 9.4 meters/30.4 feet from center, giving enormous roll resistance at anchor. In addition, the booms are long enough to be used for light hoisting over the transom – think someone in the water. 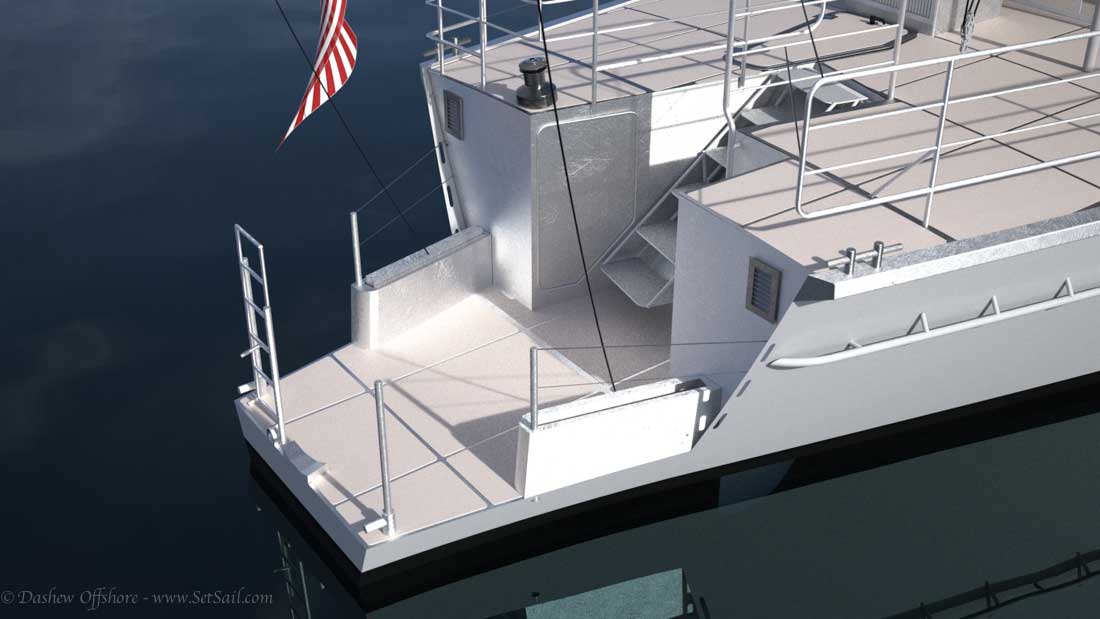 Storage of the roll control plates (used at anchor) is built into the structure at the forward end of the swim platform. In this view you get a closeup view of the port side stored flopper stopper, as well as the mid-topside starboard rub rail, which also acts as a handhold from the dinghy. When you are moving frequently between anchorages, the roll control halyards can be left connected, making setting and retrieval a five minute job.33 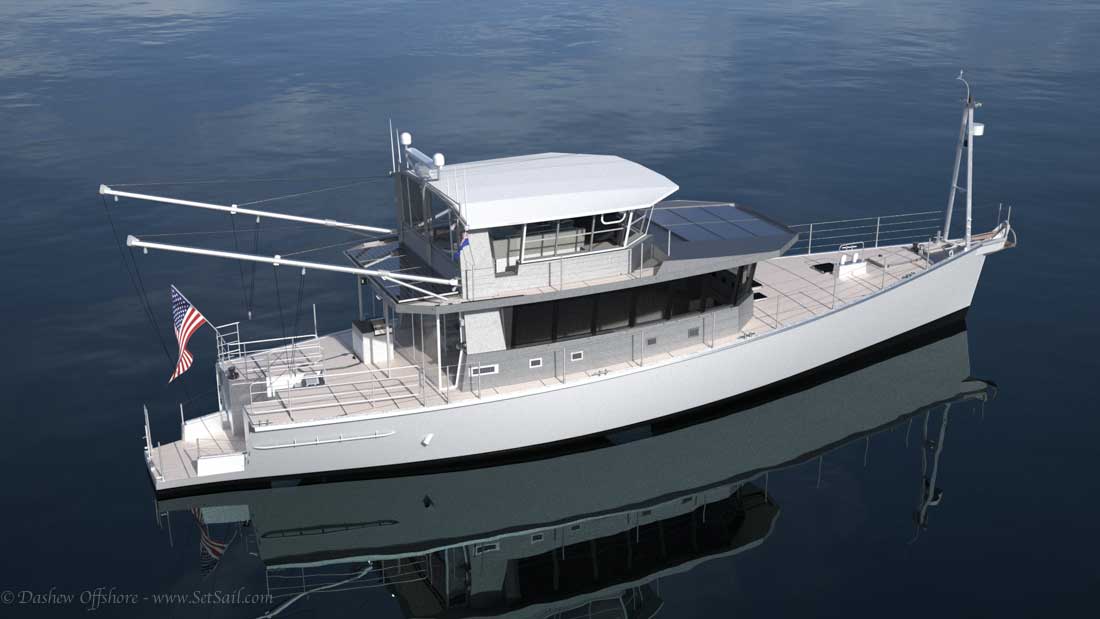 Practicalities aside, we like the way the FPB 78 looks now – a lot. Of course we could be biased. 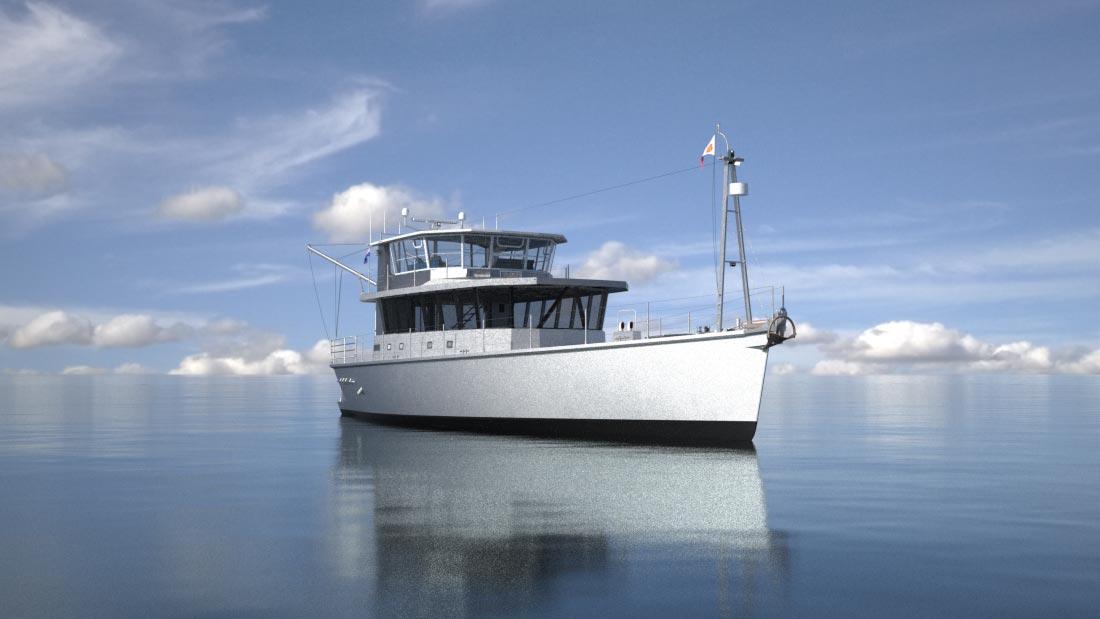 A final note on antennae: the wire between radar and forward masts measures over 17m. This is long enough after insertion of insulators at each end to act as a very efficient full wave length 16m SSB antenna. The forward mast carries two VHF and an AIS whip antenna. This reduces the aft clutter and offers better separation between them.

This entry was posted on Friday, July 4th, 2014 at 4:16 am and is filed under Dashew Logs, FPB 78. Both comments and pings are currently closed.