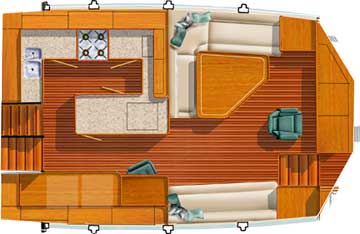 The layout of the saloon is developed around the concept that we primarily passage with just two of us aboard, and we prefer that watch keeping, working in the galley, and just plain hanging out occur in the same area.

This layout is both more fun and functional.

There are several advantages to this approach. First, the watchstander has good sight lines forward, to both sides, and aft. The latter is normally not the case when the bridge area is separated and up half a level. We like being able to see aft when we’re on watch, and it is essential when maneuvering in port. The second advantage is visual space. The galley, saloon, and bridge area all share the same environment – so the distances between visual obstacles (windows, mullions, valances) are much greater when all of this is together. This creates more of a feeling of spaciousness than if the areas were separated by a bulkhead or high furniture. 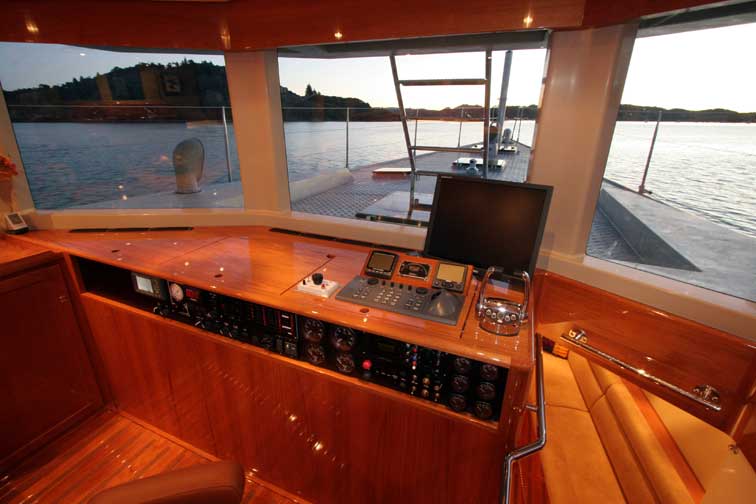 The only negative comes with night lighting. Under normal circumstances, when well offshore, it’s fine to use the low-level lights in the galley while keeping watch. On those rare occasions when we’re in traffic or in difficult situations, the galley is left dark. The advantages of this type of layout far outweigh the occasional negative.

We keep watch in two locations, depending on sea state and operational needs. When the boat has a bit of motion, or when we are required to be close to controls and nav gear, the helm seat just behind the navigation desk is favored. Other times, we sit on the saloon seats, feet up, facing forward. 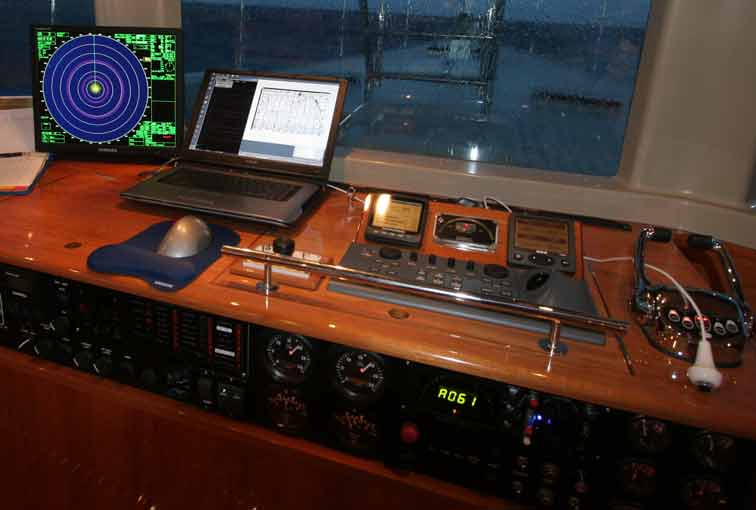 Here is a close up of the final bridge area layout. The black box radar uses a 19″ high definition computer monitor for the PPI (radar image display). The keyboard control for this is located to the right, on the desk top, right in front of the helm chair. The portable computer, which has our navigation software, motion logging system, e-mail, etc. is just to the left of center in the photo. Notice the horizontal handrail at the aft end of the desk. There is another on the port side as well as overhead handrails. These come in handy when it is rough. Engine controls are to the right. The white button is an emergency stop on the end of a long cord. When we’re in areas with lots of debris in the water, this sits on our lap. Touch the button and both engines go into neutral within half a second.

This entry was posted on Wednesday, October 19th, 2011 at 2:34 pm and is filed under Dashew Offshore, FPB 83. Both comments and pings are currently closed.