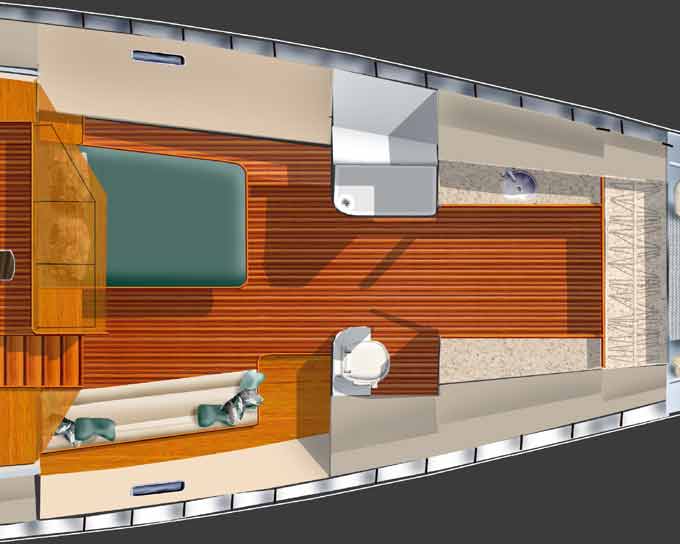 There are several ways of looking at the design premise for the owner’s “suite”.

You could say that since most of your time is spent asleep in this area, just the basics will do – aesthetics and visual space are not important. Or you could take the opposite approach and say it is a special area in the boat, one where you want your surroundings to give you pleasure as you doze off. We subscribe to the latter concept. 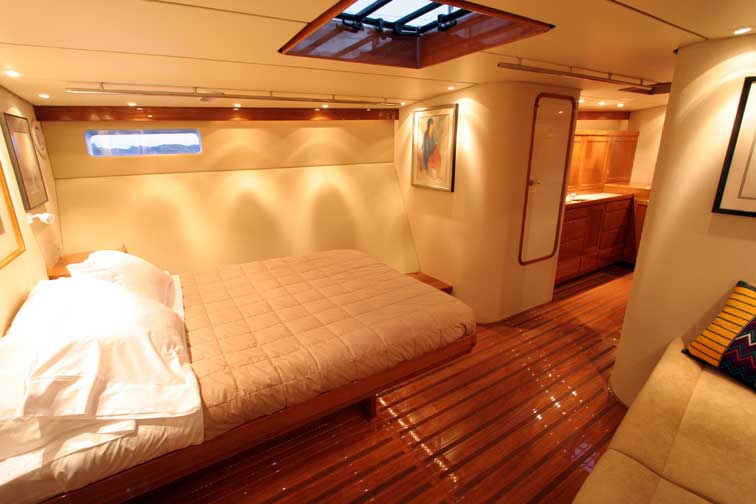 The next question is where this suite should be located. The concept we’ve found that works best is to have the Master Suite forward. 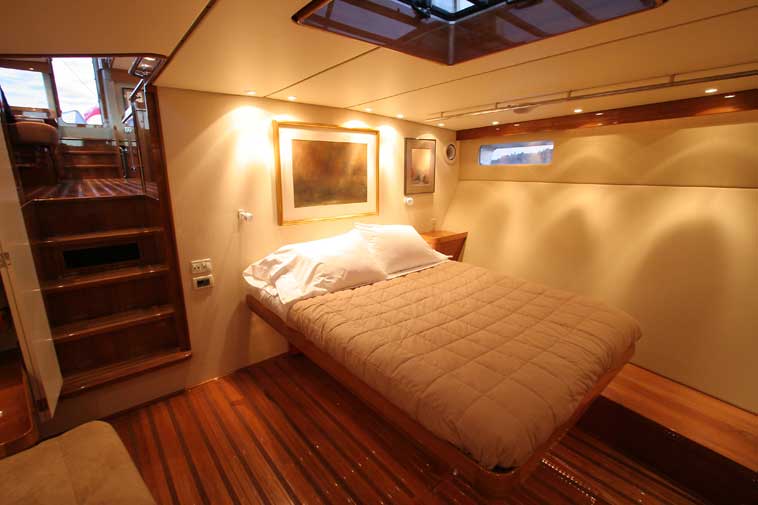 This location has several advantages. First, it is the best ventilated part of the boat. With two deck hatches – one at the foot of the bunk and the other in the dressing room all the way forward – we have a great air flow. 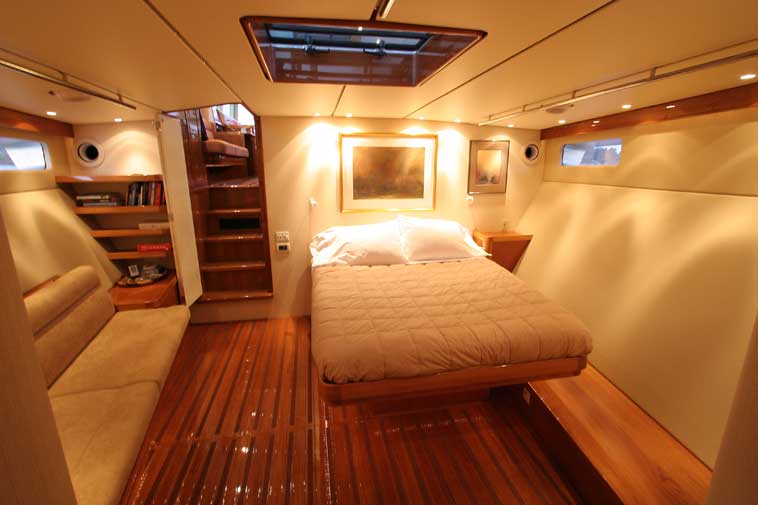 In the tropics, these deck hatches are covered with semi-permanent low-level awnings, so they can be left open, even in moderate rain. As long as we’re at anchor, air conditioning is not required. 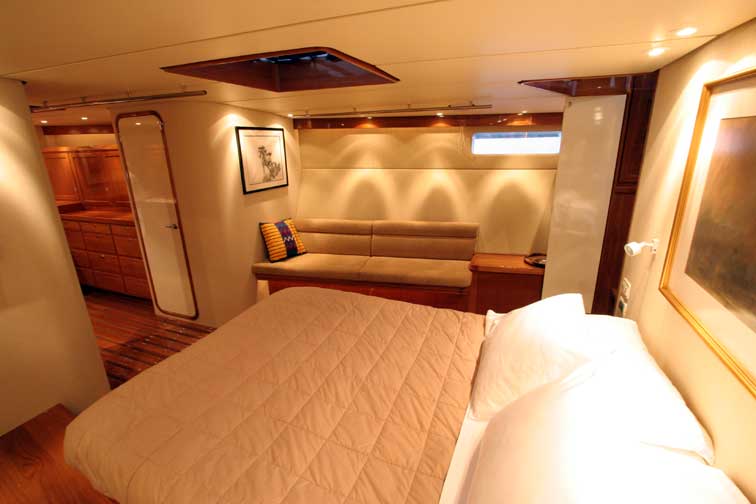 The next advantage is that we can hear the chain rattle if the boat is moving. The chain noise tells us what is going on with the wind and how the boat is reacting, and it warns us if we are dragging. Even though these sounds – when they are present – are only coming through the fog of sleep, we rest better knowing if the situation warrants there will be enough noise to wake us. Finally, in the context of noise, with our stateroom forward and engines all the way aft, this area is silent under way, except for the sound of the waves passing the hull.

Forward of our sleeping cabin is what we refer to as the “dressing room”. This is an idea that came when we were designing Beowulf, and it has proven highly efficient in terms of storage, life aboard, and aesthetics. 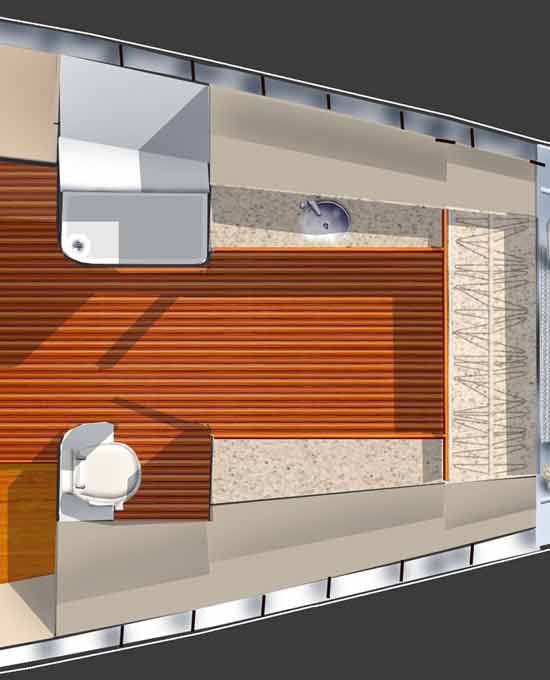 We start out with a bathtub and shower on the port side. To starboard is the head. Outboard of the head there are a series of large shelves where we’ll keep our linens. 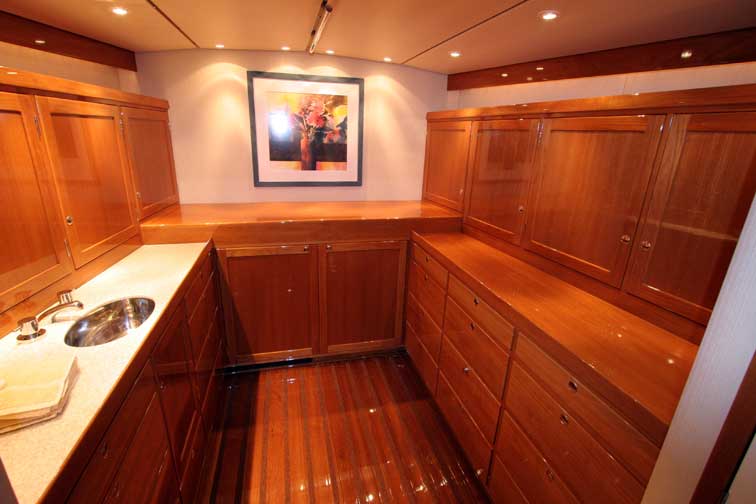 Moving forward you have the dressing room area. On both sides, above counter height, we have locker doors, behind which are three shelves. 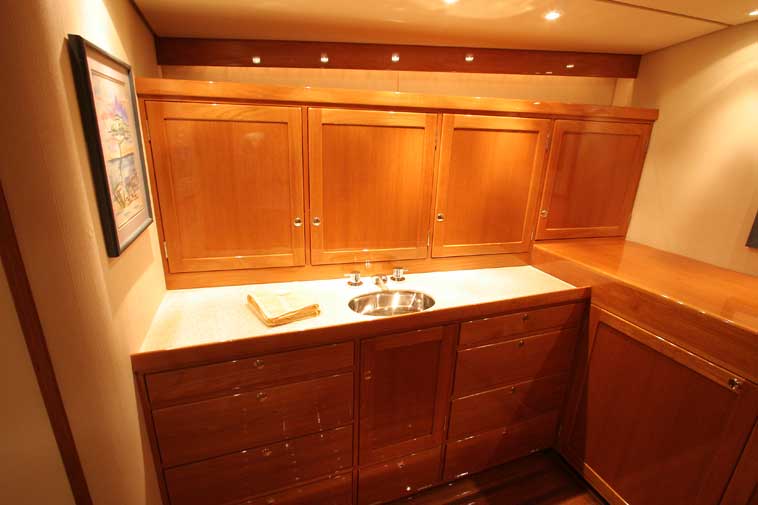 Below the counters are 19 drawers. At the forward end of the dressing room is a hanging locker that runs the full width of the hull. This is a huge amount of easily accessed storage, far more than we’ll ever use. 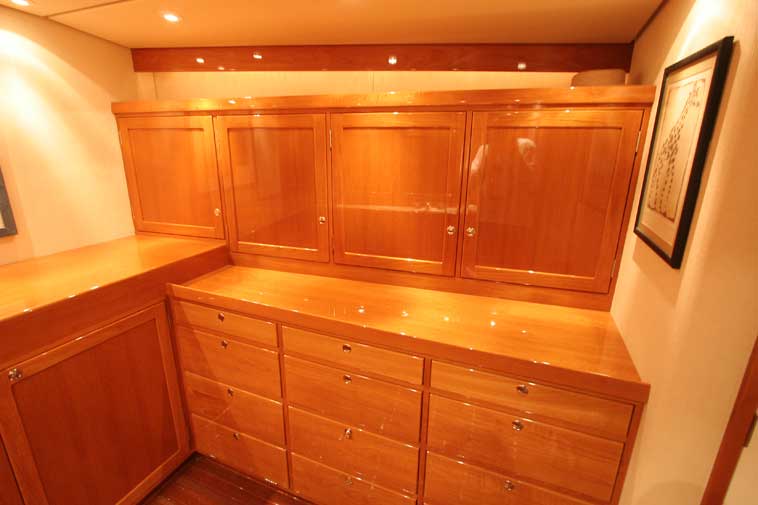 Which means that our personal effects can be more neatly organized and stowed. (This is more Linda’s issue than Steve’s – she likes her shelves and drawers just so. Steve does as well, it’s just that we have different techniques for achieving this goal. Linda uses the traditional fold-and-position approach. Steve prefers something learned in high school – wad up the clothing like a football, and throw it with as much gusto as possible to the place of storage. The higher the velocity of the item in question, the better compression ratio and storage density that can be achieved.) 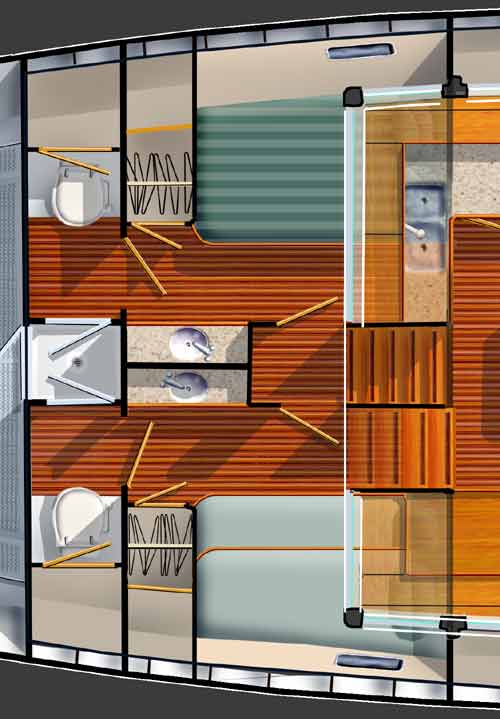 We look at the staterooms aft in two contexts. First, this is where our guests stay. Most of the time this would be another couple, and occasionally, when we’re lucky, maybe the kids and grand kids Guests are going to visit for a couple of weeks at the most. 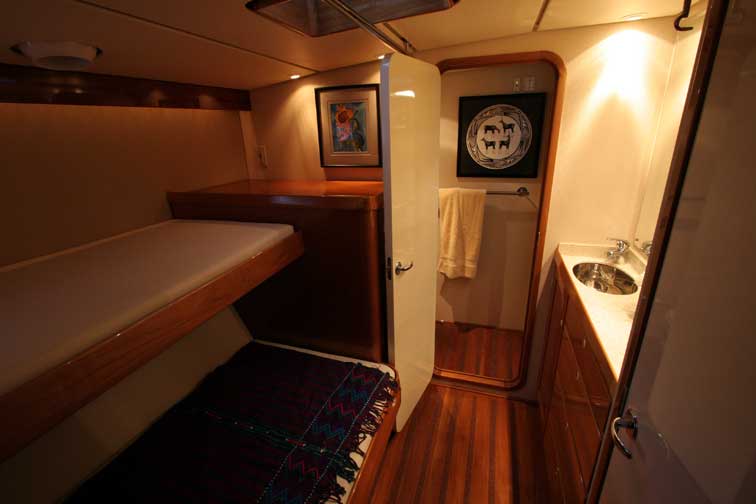 The second use is under way if we encounter uncomfortable weather. When this occurs (rare in the first 16,000 miles) we move aft. 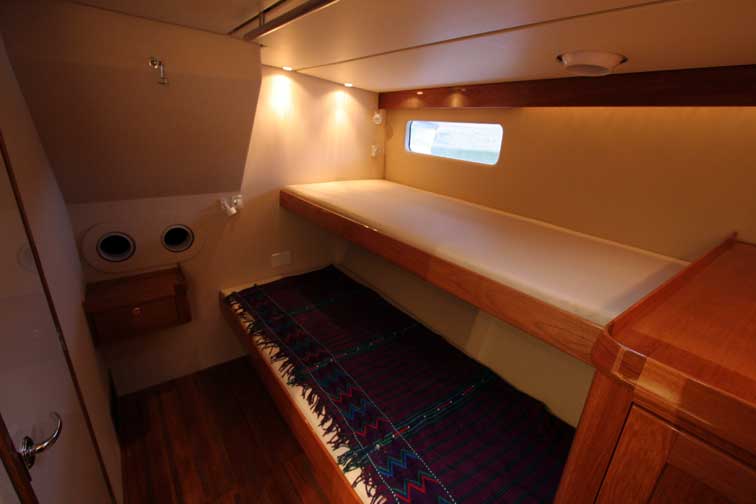 We use the starboard cabin (above looking forward from the aft end) if we expect really heavy weather. The spaces are tighter so there is less risk of falling, and the bunks are narrower, making it easier to wedge ourselves in against any motion. 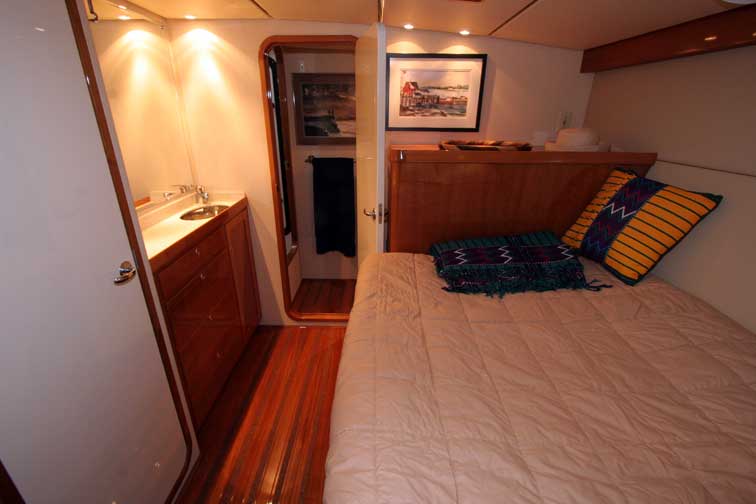 The bunk in the port cabin is a double, plenty big for a couple to use in the tropics. This is where we usually sleep on upwind passages if the seas are large, as on the passage from Hawaii back to California. 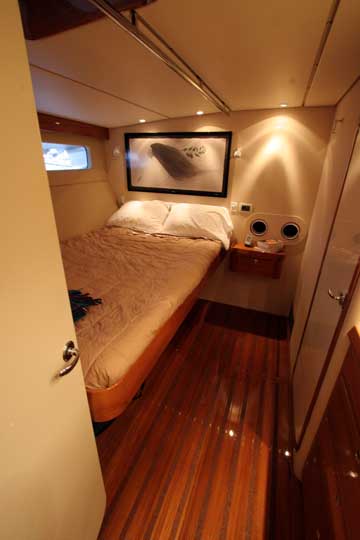 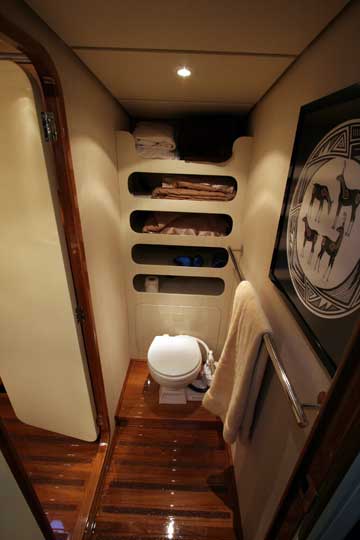 The heads each have large shelving areas behind them for storage of bedding, towels, and personal effects. Between the two heads is a shower proportioned to be easy to use at sea if the boat is moving around a bit.

This entry was posted on Wednesday, October 19th, 2011 at 2:29 pm and is filed under Dashew Offshore, FPB 83. Both comments and pings are currently closed.


One Response to “Staterooms”