Open House With A Blow 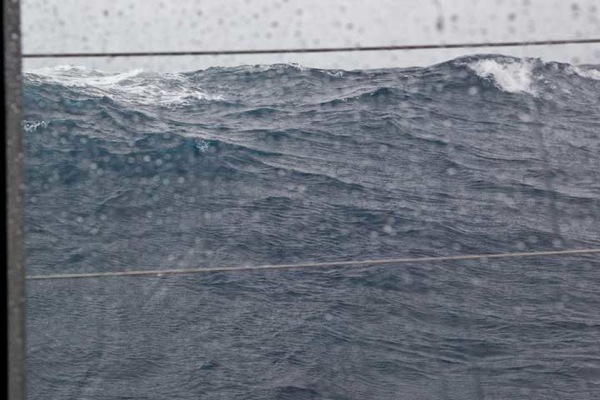 The excitement of sea trials and open house is over and we are back in Arizona with a load of photos and video to process. The link at the bottom will take you to another eight minutes of video, this time with lots of visitor comments plus a bit of action with the seas abeam and behind as well as on the nose.  Most folks in the marine industry would rather avoid a sea state derived from three days of gale force onshore winds. We believe awful sea states are an excellent learning tool. A rough day at the office, as it were, keeps us on our toes, and our decision making process focused. To have a tolerable, or better yet enjoyable experience in these conditions, hull shape, foils, and stability curves play a part, as do scantlings.

But these are in the background when you are at sea, and it is the interior layout which becomes dominant. Ease of movement, handrail placement, fiddle rails, and furniture that constrains your body if an unexpected lurch is encountered, create an environment that invites you to head offshore. Even the need for stairs, their quantity and shape play a part in this.

If visitors happen to be onboard, and if they are past or present power boat owners, with real world experience, they can quickly judge the merits of the FPB approach to crossing oceans.

To watch this latest (9.5 minute) video click here. There are four other videos associated with this sea trial and open house, which have been previously posted. We have collected the links to each of them below.

The second sea trial video was filmed on the way south from the Bay of  Islands to Whangarei. Off Brean Head we encountered a nasty confused patch of waves and Pete Rossin dug out his Canon C95 pocket sized still/video camera. The video is short and the waves impressive. Video two (two minutes, forty five seconds) is here.

Video number three has long shots of Iron Lady heading into the steep seas off the entrance to Whangarei. Studying these sequences will give you a feel for the wave patterns, and how the FPB 64 reacts to them. This is a lot more realistic than what you take away from short clips. Video number three (seven minutes forty seconds) is here.

Video four has a series of long shots, both inside and outside, upwind, with the seas abeam, and running off. Video number four (seven minutes 44 seconds) is here.

This entry was posted on Saturday, October 20th, 2012 at 12:03 pm and is filed under FPB 64 Updates, FPB 64 Videos, Most Popular, Right Sidebar Latest Videos, three. Both comments and pings are currently closed.


8 Responses to “Open House With A Blow”