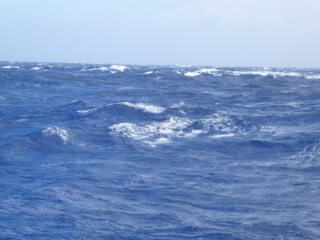 When you design a yacht to deal with heavy weather, the process is made difficult by a lack of real world experience in truly dangerous conditions. But occasionally events transpire from which you can learn something. One of those is depicted above in the photo sent in by Peter Watson, the owner of FPB 64-6 Grey Wolf.

Markers are laid down that can be dissected and, when understood, move the design process a bit further along. One of those events transpired recently as FPB 64-6 Grey Wolf, Peter Watson Master, was approaching the Azores in the Eastern Atlantic. Grey Wolf found herself in an unforecast strong gale.

Before we get into this situation in detail, let’s spend a minute discussing heavy weather tactics in general. It is not unusual to want to run off with a storm, particularly if you are going the same way, or you have a storm center from which you are trying to move away. This is often the only course open when maneuvering away from a tropical storm system.

In both power and sail steering, characteristics are going to determine how long you can run, and when you have to stop, turn around, and jog (under power) or heave to (under sail) heading into the wind and waves. Steering control itself is a function of rudder size relative to the load, hull balance, bow shape and if or when the bow begins to lock in. The deeper the forefoot is immersed, the more difficult will be the job of the rudder.

When the hull is being designed, if you are concerned with this subject, there is an inevitable conflict between upwind comfort and downwind control. The most comfortable upwind shape is narrow and deep. The best steering bow is wider and less immersed.

There are no computer programs to make the decision, tank testing is of marginal value, in the end you go on gut, your own experience, and the reports of others.

In our own case there are several seminal downwind passages that have helped us formulate our ideas on this subject. One was an extreme northeaster blowing against the Gulf Stream with extreme breaking seas aboard the 62-foot cutter Intemezzo II. Another was a 50+ knot compression gale in the south Pacific aboard the 78-foot ketch Beowulf. The FPB 83 Wind Horse experienced just one real gale, that caught us between Greenland and Ireland, other than the 35-40 knots of wind on our first passage to Fiji from New Zealand, and this we went looking for.

With the FPB 64s, we have had glimpses of how the design tradeoffs have worked downwind, but nothing we’d consider a real test, until now.

What we are looking for is if and/or when the yacht runs out of steering control. With Wind Horse we never came close to running out of rudder. With the FPB 64 Peter Watson and Grey Wolf have moved the marker another notch. 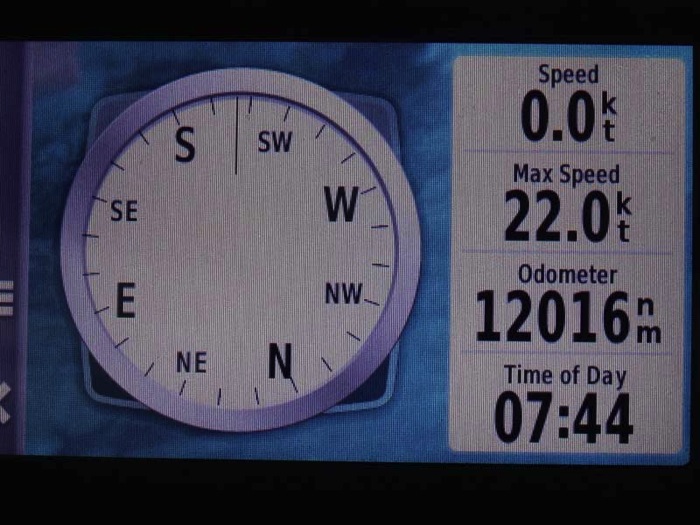 You are looking at a remarkable number, sent to us from Grey Wolf after they were secure alongside in Horta. This is the maximum speed attained on the GPS when they were surfing off ahead of their force 8/9 gale. Twenty-two knots represents a speed length ratio of 2.7. Most “experts”will tell you that this number is impossible on non-planing hulls, and the round bilged FPB 64 is certainly not a planing hull!

Grey Wolf was working her way through an under-forecast gale at 37 degrees 42.2 N 32 degrees 31.8 W. Waves were 3.5 -4m, fast moving, with long, mature faces. Wind speed was in the 28 to 40+ knot range, barometer 1015, and the engine turning 1775 RPM. The autopilot was in aggressive mode with minimum dead band/sea state and increased rudder gain.

Peter Watson reports that they were in total control and at no time felt like they were close to the edge.

At some point the FPB 64 is going to run out of control and need to stop, turn around, and jog into the seas. But that point has been pushed back.

This entry was posted on Friday, July 11th, 2014 at 7:49 am and is filed under Cruiser's Tech Talk. Both comments and pings are currently closed.


13 Responses to “Power Boat Storm Tactics – Running With The Waves”