Survival Storm Tactic Tested Off The Needles In Breaking Seas: Updated With Video 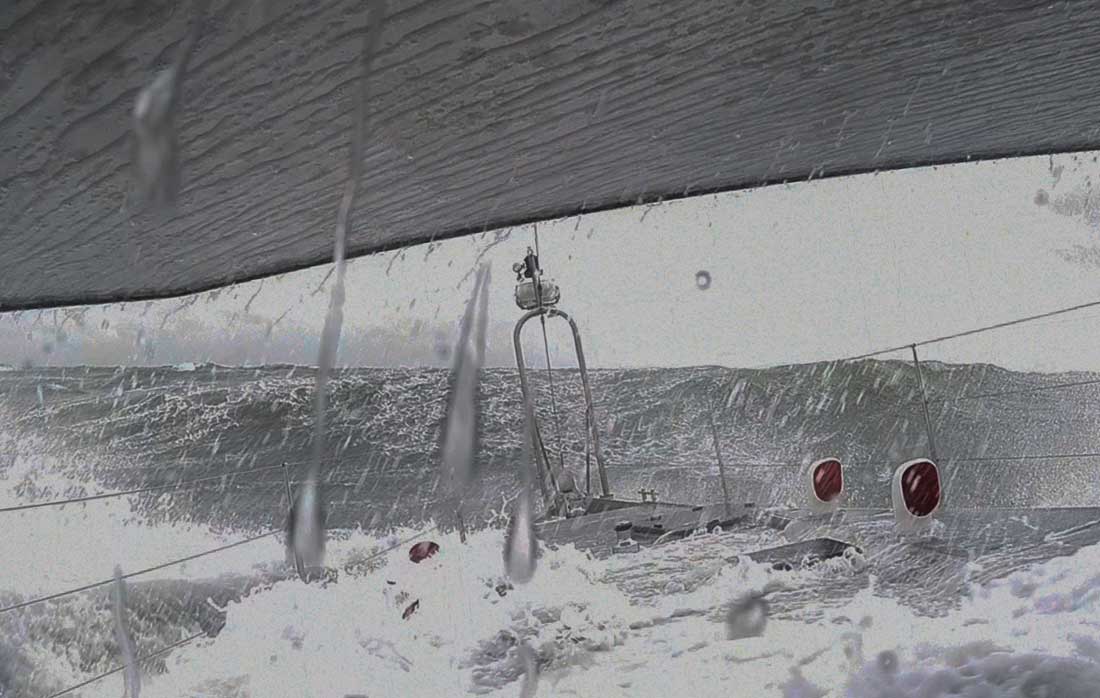 The ultimate survival storm tactic, jogging into breaking seas, has had its first (and hopefully last) FPB test. This took place recently off the Needles near the Isle of Wight in the UK’s Solent. There is some fascinating video taken aboard FPB 64-6 Grey Wolf in tide against wind generated breaking seas (overfalls), with the stabilizers off, to which there is a link at the end of this post.

There are all kinds of tradeoffs in yacht design. One of the most difficult to get right is the relationship between hull shape at the waterline and further up the topsides. If you are too fat at the waterline, the boat pitches and rolls uncomfortably. If you are too skinny, then a variety of unhappy things may occur. When you are going downhill at speed, more volume in the ends is desirable. Heading into the waves the opposite is the case, until you encounter large, breaking seas, in which case you need sufficient volume  above the waterline so that the bow lifts to the oncoming wave.

Of course too much lift and a dreadful pitching or hobby horsing ensues with a substantial reduction in speed.

We know from long experience that the FPB Series have their act together running downwind at speed. To date, in multiple ocean crossings and several hundred thousand sea miles, no FPB has run out of steering control downwind. We can also say that the FPBs have done pretty well uphill, although the usual approach is to try and avoid this sea state.

In terms of heavy weather, possibly even a survival storm, we have always assumed that in most cases, if headed towards a favorable destination, we’d run off before a real blow…until we ran out of steering control. At this point it would be time to turn around and jog into the breaking seas.

What might or might not be possible to deal with has been open to conjecture. But with this experience off the Needles we have a much better feeling for what could be possible in a survival sea state.

The video below was taken in in a southwesterly gale, blowing against an ebbing tidal current, in shallow water, outside the marked channel off the Isle of Wight. The closely spaced breaking seas are similar to the breakers on top of larger waves in open ocean storms.

We have learned several important lessons from the video. First, the distribution of volume and waterline shape works well in these breakers–what would be called survival seas in many yachts. The bow lifts to the oncoming seas, sufficiently so that little actual water comes on board, and what does is quickly shed. Second, with stabilizers off the heel recovery is rapid, with no indicated tendency to rhythmic rolling that can be so dangerous. Third, the prop appears to have sufficient blade area to handle the chaotic disturbed water flow while keeping the boat moving at cruising speed. It might also be of interest that storm covers are not required on the forward facing windows in these conditions

Operating in these conditions is not something we recommend anyone else try. Better to stay in the marked channel. But we are very pleased to have real world confirmation of what was before a theoretical exercise.


20 Responses to “Survival Storm Tactic Tested Off The Needles In Breaking Seas: Updated With Video”