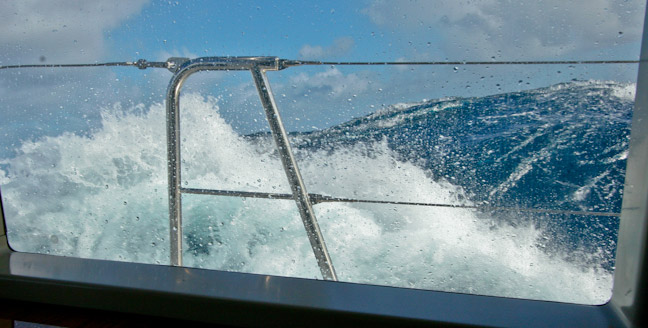 The following was originally written in the fall of 2008 as the economic system appeared to be melting down. As 2014 begins, the economic situation appears on the surface to have has stabilized, but if you know an economic system and bank in which you have 100% confidence please advise (and it would be nice if they paid a nice rate of return on deposits).

Here is what we wrote in the fall of 2008. We think it still applies.

Many of our land-based friends are in a state of depression, panic, and fear about the current state of affairs, and what the future holds.

As we have seen before in research we’ve done on heavy weather experiences, anxiety can induce a form of intellectual paralysis. This leads to inaction, which in the context of storm tactics at sea, rarely is the correct approach. We think the same can be said about the economy.

For us there are two basic questions in play. First, how does one protect their asset base? Second, how do you lead a fulfilling life while waiting for the inevitable turnaround?

We’ve been through economic cycles before. The last one that hit while we were cruising was in the early 1980s. Unemployment in the US was approaching 10% and interest rates were above 14% on long term mortgages. There wasn’t much of a market for our designs, the cost of our cruising life style was about a quarter of a land based existence, so we stayed afloat. That was an easy decision.

Fast forward 25 years, and economic malaise is back (in different form). But the cost benefit relationship of cruising is still the same. If your asset base has been reduced, so has the cost of acquiring a good cruising boat. There may be less balance sheet to total up, but it will go a lot further in getting you out there where life is very pleasant.

Which brings us to the right boat for cruising in general, and for these times in particular. Since we are somewhat biased on this subject, we will admit up front that we think the FPB 64 is the ultimate vehicle in which to pleasurably ride out this economic storm. 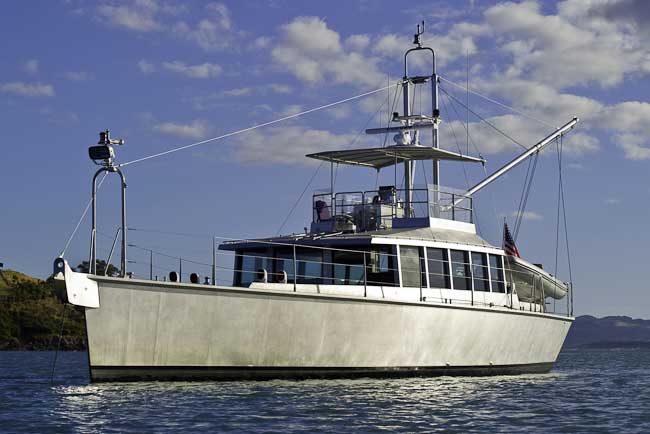 We are going to address some of the design features that make this so (a few of which will apply to other yachts as well). 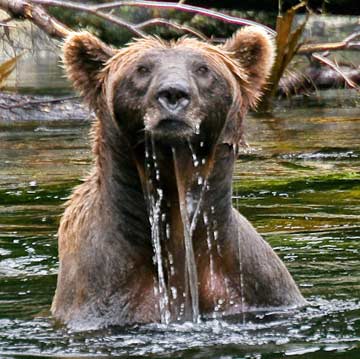 As we update this article in the summer of 2010 the stock market is selling at high multiples, implying a great future. Interest rates on US T-bonds are at extremely low levels and short term T-bills yield almost nothing. Tax free muni-bonds have great yields, but then what happens when the states cannot pay their salaries let alone bond interest and principal? Of course there is gold, but do you want to get into this at US$1500/ounce? And how do you hold it? Gold stocks, gold certificates, and related all have their risks.

And what currency do you diversify into? The US dollar is strong right now, but what happens in a year or two when those trillion dollar bail outs, so adroitly voted on in Washington, come due? The Euro, Swiss Franc, or British Pound? Their banking systems are in as bad (or worse) shape than the US. China might be a bet, but they do not allow foreigners to hold Chinese currency positions.

We are going through these deliberations as are lots of others. We can think of a few “safe” investments. Unleveraged commercial real estate with positive cash flow is a hedge in inflationary and deflationary periods. Short term sovereign paper in liquid markets is good for deflation and at least protects you against the capital loss of longer term positions when interest rates begin to reflect the increase in money supply – if you trust the issuer not to turn to the printing press to solve their problems.

And then there is precious metal. Not the shiny yellow or silver stuff, but gray, as in aluminum. For us the FPB is the floating equivalent of a financial bomb shelter, the ideal asset class in which to ride out this financial storm.

The FPB 64 is efficiently priced, comes fully equipped for extended cruising, is inexpensive to operate and maintain, and when the time comes to change investment vehicles, you are not competing with a huge overhang of inventory in the brokerage market.

Best of all, you can comfortably cruise anywhere in the world – from the tropics to high latitudes – enjoying a wonderful life style for a fraction of the cost associated with existing on land. You are free from the daily grind of depressing news. Being away from the front lines makes for a clearer perspective, leading to better decision making. 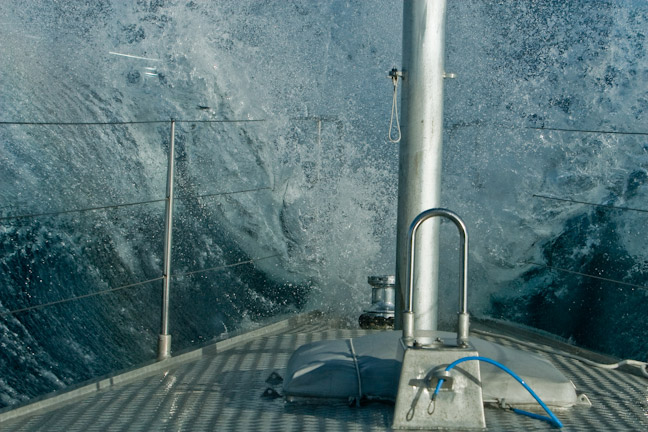 In short, a structure which has higher factors of safety with the ability to endure more punishment than any other yacht you can name. The shallow draft (4.5 feet (1.5m) opens up all sorts of safe havens (and great cruising grounds) denied to deeper craft.

And the quick average cruising speed, comfortable motion, and ability to deal with adverse weather, gives you a wide range of options on where to cruise. 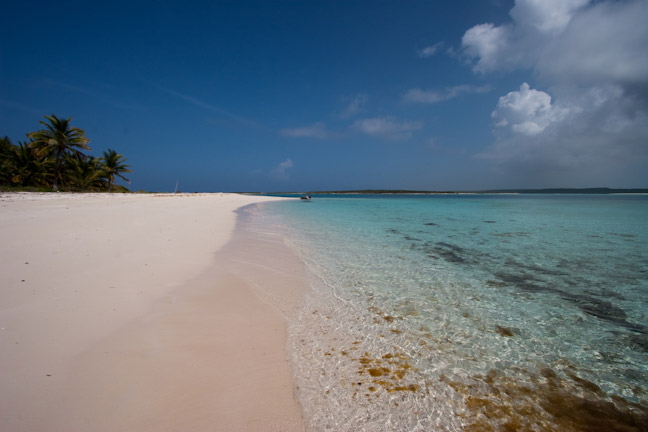 Bottom line. Would you rather be watching the markets seesaw on Bloomberg Financial or enjoying a tropical sunset in the South Pacific, the Bahamas, or Greenland?

Add in the security of knowing this asset class is going to take care of your lifestyle regardless of the economic situation in the outside world, and the decision becomes easier.

Yachts represent an enormous sign of wealth. The further off the beaten path you go, the more you stand out. On a personal level this has always made us uncomfortable. Our preference is to remain low key, and to look as unyachtlike as possible. Given the stress of the world as it now exists, this approach takes on even more importance.

When we were developing the design concept for the FPB Series the ability to cross oceans safely and comfortably was paramount. Our next desire was not being associated with the typical image of the “wealthy yachtsmen”.

For the FPB design we eventually settled on an aesthetic which is a combination of commercial and military. Commercial because of the rugged bare aluminum detailing, heavy rub rails, and working booms. Military because of long, lean, even somewhat sinister appearance.

There are subtle and not so subtle advantages to this approach. Consider first the town of Cordova on Alaska’s Prince William Sound. 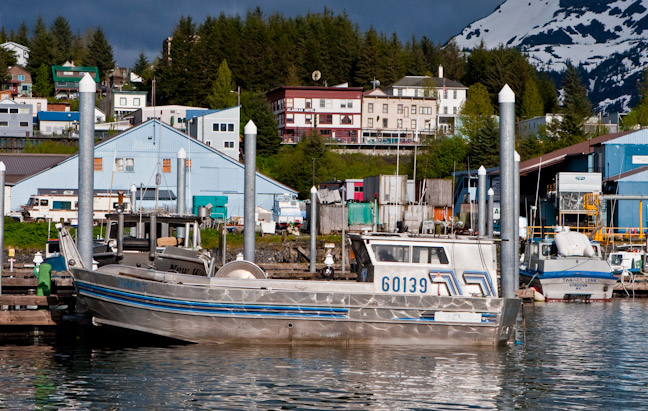 This is a wonderful, working class village, isolated from the rest of the world unless you fly or float in. The locals make their way mainly by fishing and logging. The seagoing professionals who crowd the marina understand the efficiency and sea keeping ability inherent in the FPB hull shape. They relate to the bare aluminum exterior (their own boats are for the most part similar). In short, our FPB fits their scene. 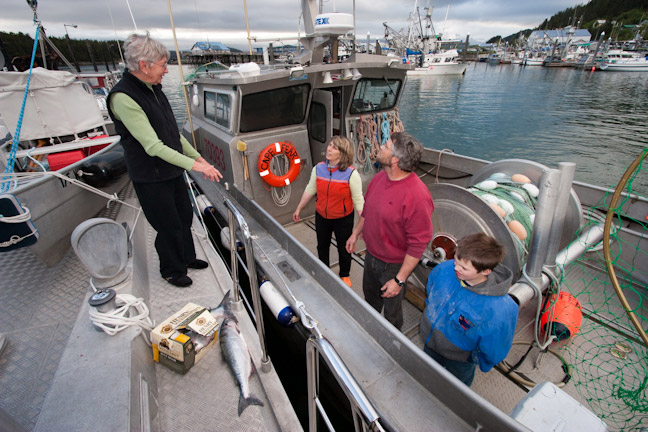 We are quickly accepted into the fraternity, something that would not happen if we were on a shiny plastic, show them what you’re worth, style of yacht.

It is a source of pleasure when someone comes below expecting to see a workboat-like layout and is startled by the fit and finish of our lovely interior. 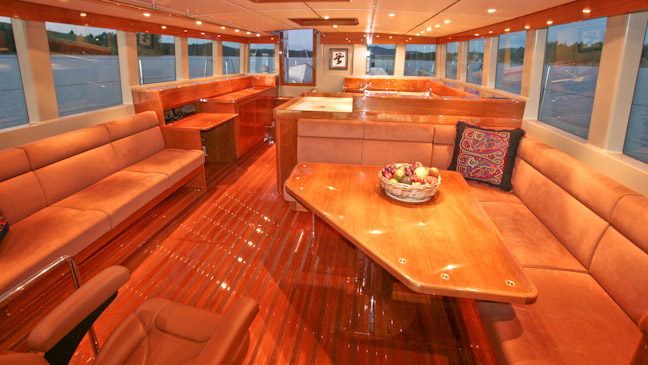 That surprise, resulting from the exterior to interior contrast,is exactly the reaction we want.

Then there is the military factor. We will use as an example our visit to Mexico’s Magdelena Bay. Wind Horse is British flagged and flies a red ensign. As we were transiting the southern portion of Mag Bay we were hailed on VHF channel 16. 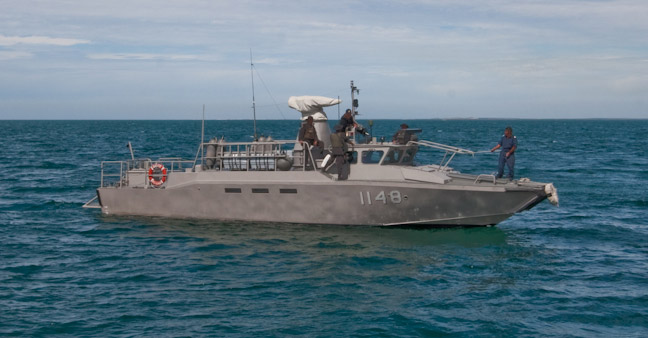 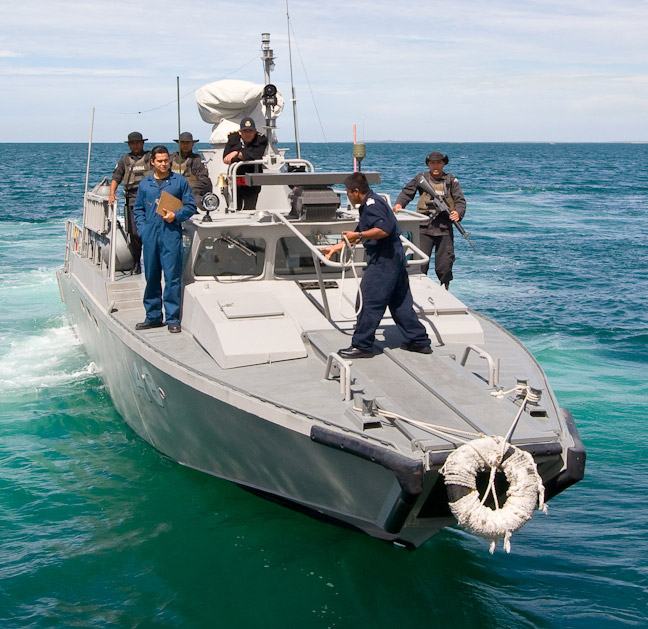 The young Mexican naval officer who boarded loved the FPB concept. He went so far as to suggest we don some form of uniform when we were transiting Southern Mexico and Central America (to maintain the militaristic image). 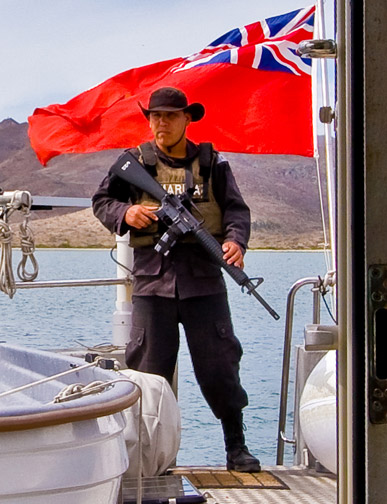 Which brings us to the subject of bad guys on the high seas. There are always a few areas that you know to avoid, such as the coast of Somalia, parts of West Africa, and these days Venezuela. The rest of the cruising world is generally as safe or safer than big “civilized” cities. But as financial stress spreads, there are going to be more fishermen (and their land based countrymen) trying to feed their families in any way they can. 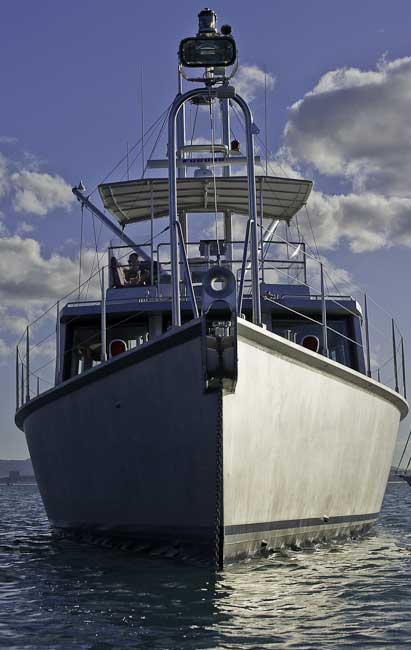 In this case, the question raised by our appearance is a huge advantage. Why mess with a lethal looking vessel when there are lots of other soft targets to engage?

From our perspective, we feel a lot more comfortable in our laid back, military/work boat disguise. And if we are feeling the need for a little ego gratification, we can reflect on the fact that we have the coolest, meanest looking cruising boat around with capabilities far beyond what other yacht owners can begin to imagine.

Green is good the planet, for mankind, and makes for a much better cruising boat. It also has advantages in a turbulent world. As cruising boats go, we are as green as you get.

Take systems for example: we have huge fridge and freezer capacity, the ability to take hot showers of infinite duration, stay warm in the Arctic and cool in the tropics, and cook in a wonderful galley – all for an average of half a gallon per day (two liters) of diesel fuel.

To accomplish this takes a blend of construction (for example, six inches – 150mm of isocyanurate foam insulation on freezers) coupled with carefully engineered batteries, alternators, and AC power servers. At anchor the FPB 64’s 11kW genset, will average about an hour every second day. At this rate you can go a week to ten days before doing a topping off charge while powering to a new anchorage.

You have the option of lying quietly at anchor, away from shore power, for weeks (or months) at a time, with less charging time than the typical generator equipped sailboat. That makes you a more desirable neighbor in the cruising community, and means you can go a really long time between refilling fuel tanks.

Underway the same logic is at work. At a speed of 9.5 knots the FPB 64 will burn less than four gallons (15 liters) per hour – cruising faster while consuming a fraction of what trawler yachts burn at slower speeds. 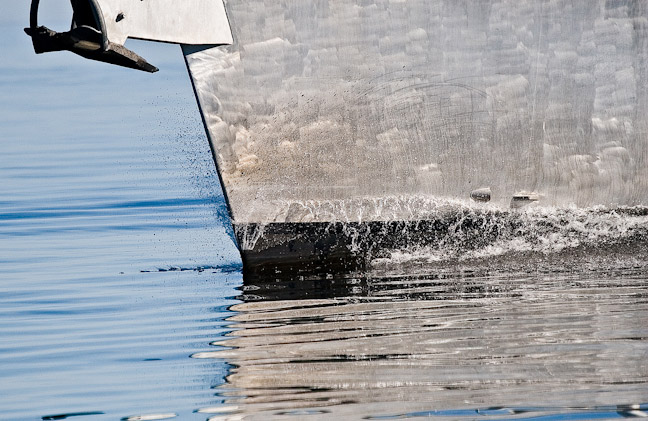 Less fuel burn results from lower power requirements which in turn mean minimal noise, vibration, and pollution. You win in terms of onboard ambiance, neighborliness, and the planet (and your cruising budget) benefits as well.

And since we are discussing staying power while the world sorts itself out, consider just how long you can go between refills of those 3400 gallon (12,800 liter) fuel tanks.If you decided to move back and forth between California and Mexico for a while, avoiding marinas 100% of the time, you could make three round trips, live aboard for three years, and still have fuel left over. 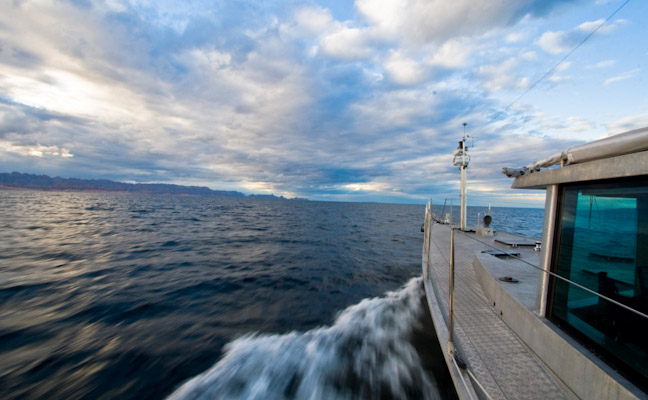 Scale the schedule between fill ups back to two years and you could do the same thing between the Eastern Seaboard of the US and the Bahamas, or New Zealand and the tropical South Pacific.

This “carbon footprint” is a fraction of what most of us consume for driving, flying commercial airlines, and taking care of electrical needs at home. 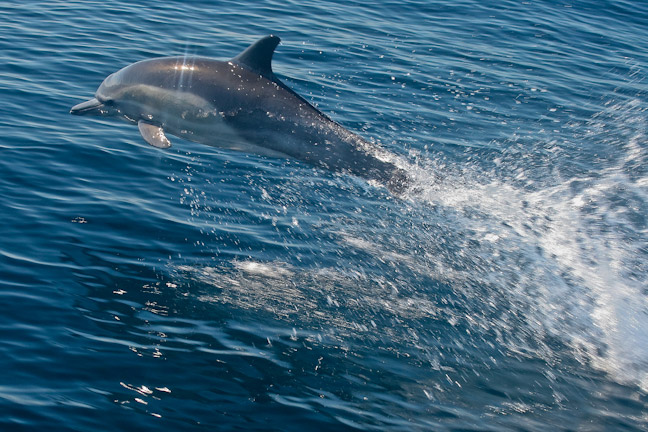 And as a bonus, it is way more fun. 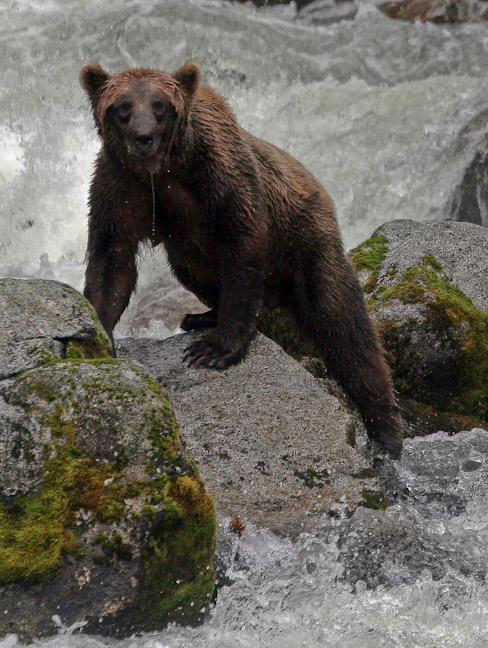 While we’d like to talk you into a new FPB 64, there are lots of used boat options, power and sail, with which to escape. So don’t let the bear market environment get you down. Find a good cruising boat, cut those lines (and worries) which tie you to land, and go.

The Making it Happen DVD is now streaming online. To watch the first segment click here.

For musical incentive to cut the lines click here.

Or, for a general escape check out the streaming videos by clicking here.

This entry was posted on Sunday, January 22nd, 2012 at 12:43 pm and is filed under Dashew Offshore, Intro to FPB Program. Both comments and pings are currently closed.