FPB 97 Performance – What Is Your Guess? 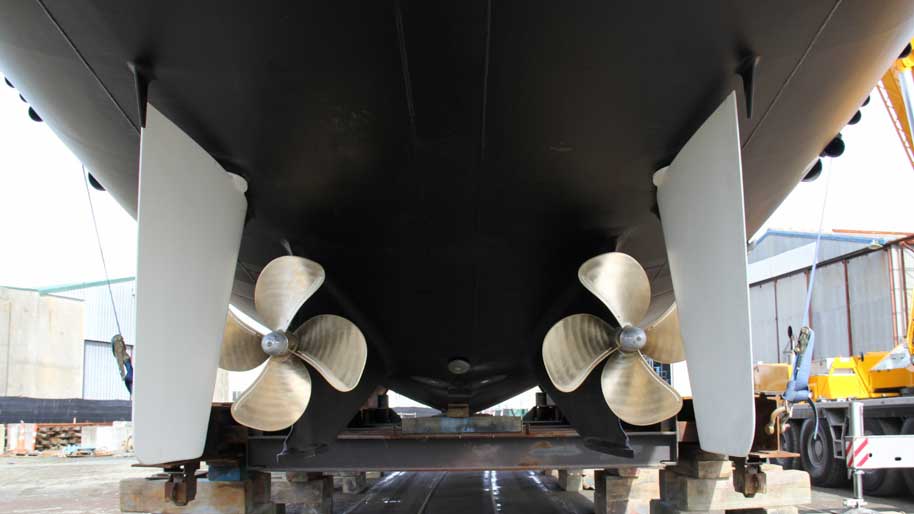 We will shortly begin a wicked set of sea trials with FPB 97-1. Along with the usual wringing out of the boat before handover, one of the objectives is to gather a data set with which to refine our velocity prediction algorithms.

Predicting performance is notoriously difficult. In our case it’s harder than most, as there is no historical data to use other than our own. Various code packages are mixed with tank, real world, and large scale model test sets to conjure projections.

Propeller efficiency, wake fraction, buttock shapes and flow diversion, engine power curves, trim, even water depth, salinity, and temperature are involved, not to mention fore and aft prismatic, block, and volumetric center numbers. A wicked brew for sure, and to get close requires a healthy dose of skepticism and gut feel. That said, we have to make predictions in order to specify the initial set of props.

What we expect is a closely guarded secret. Nobody has the magic numbers outside of a couple of folks with “need to know”. But we thought you might enjoy speculating. Here are the ingredients:

Astute observers will note missing data such as prop size and pitch, vessel displacement, and a host of other characteristics. You didn’t want this too easy, did you?

FPB 97-1 has a set of new-to-us Veem (Australia) propellers. The decision to give these propellers a whirl (pun intended) with the FPB 97 is based on the theoretical advantages offered by easily changed “Interceptor” strips on the propeller blade trailing edges. By varying the thickness of these strips, the pitch characteristics can be easily altered. We have been told a diver can quickly change the strips, which would be a huge benefit to all concerned during the sea trial process. And Veem claims some impressive efficiency numbers.

So here is the contest: Initial trials will be done in light trim, with 10 metric tons of fuel and water aboard. They will be in deep water (salt), and in smooth conditions.

The winner gets the accolades of SetSailors everywhere, and a cool (yet to be taken) most wicked photograph of FPB 97-1.

Before we all get carried away with the “science” of performance prediction, a cautionary tale: There is a large heaping of BS associated with all things yachting, and none more so than the propeller end of the business. If you stick with the tried and true, the projected outcome has a higher chance of being in the ballpark with the estimates. Use something new and you might get a breakthrough or the opposite. Nothing ventured, nothing gained. When we started the FPB project many years ago with Wind Horse, we took a chance on some very expensive, theoretically highly efficient props from Henleys in New Zealand. We gave Henleys our drag and power train data and they suggested a set of five bladed wheels. The performance of the FPB prototype, while impressive, left something on the table. Henleys, saying their props were perfect, were uninterested in looking further. When Wind Horse found herself back in the States we replaced the Henleys with a set of Michigan wheels costing a third of the originals, and picked up the missing performance in the process.

The Henleys props are now a sculpture on top of our mailbox, the subject of some discourse in the neighborhood. And for us, a reminder every time we drive in or out, to take everything one hears in this business with a grain of salt.

Send us your prognosis, and may the best estimator win! 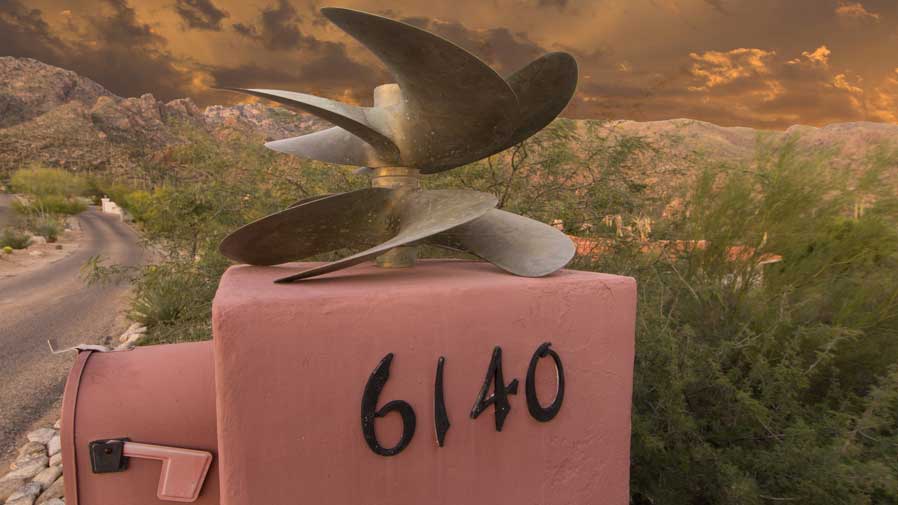 This entry was posted on Saturday, November 22nd, 2014 at 5:37 pm and is filed under Dashew Logs, The Logs, three, Wicked FPB 97. Both comments and pings are currently closed.