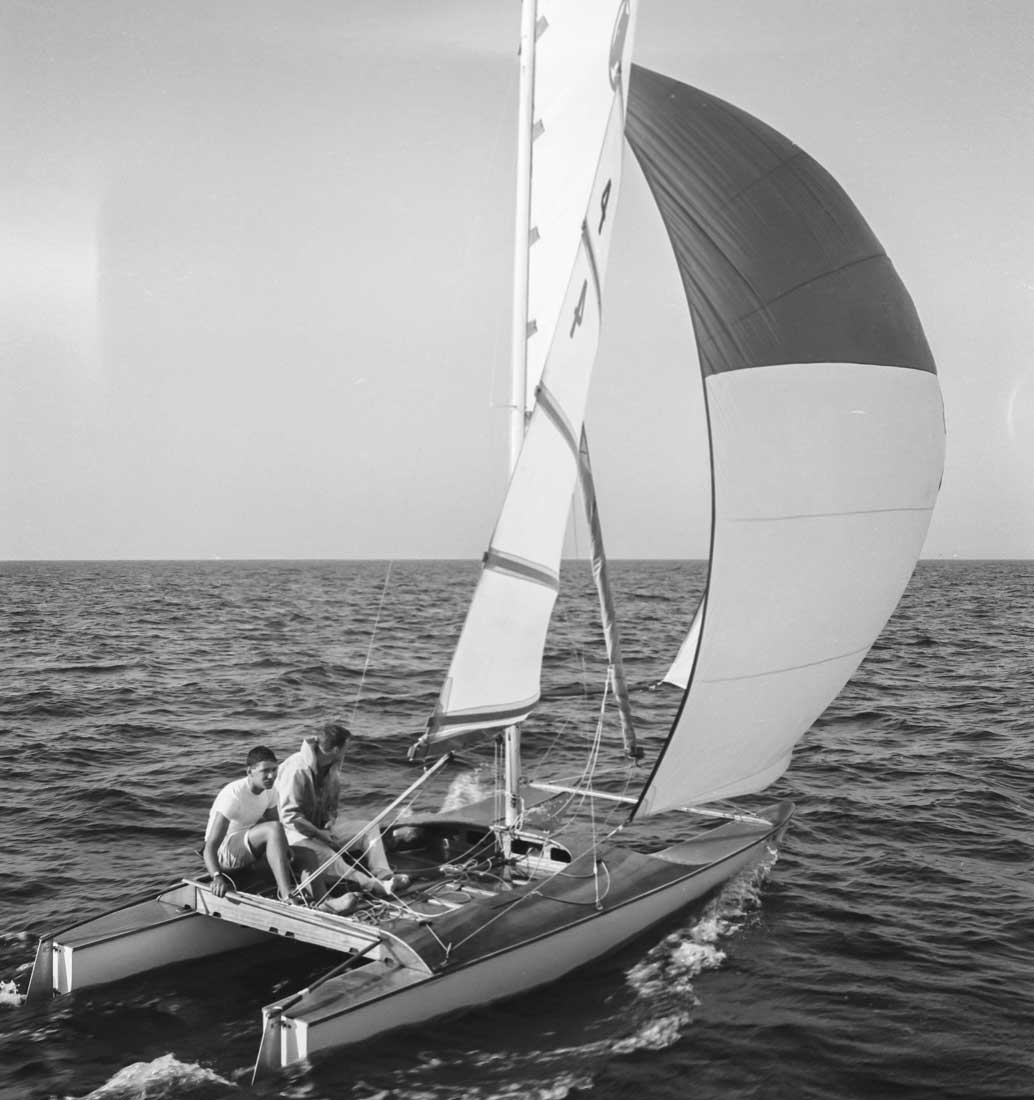 In the process of cleaning up the office, a few more photos from the early days of the multihull history on the West Coast have come to light.

The lead photo is our first catamaran, the 17-foot Wildcat class, Tango. She is shown here with her stock rig. This was about 1958. 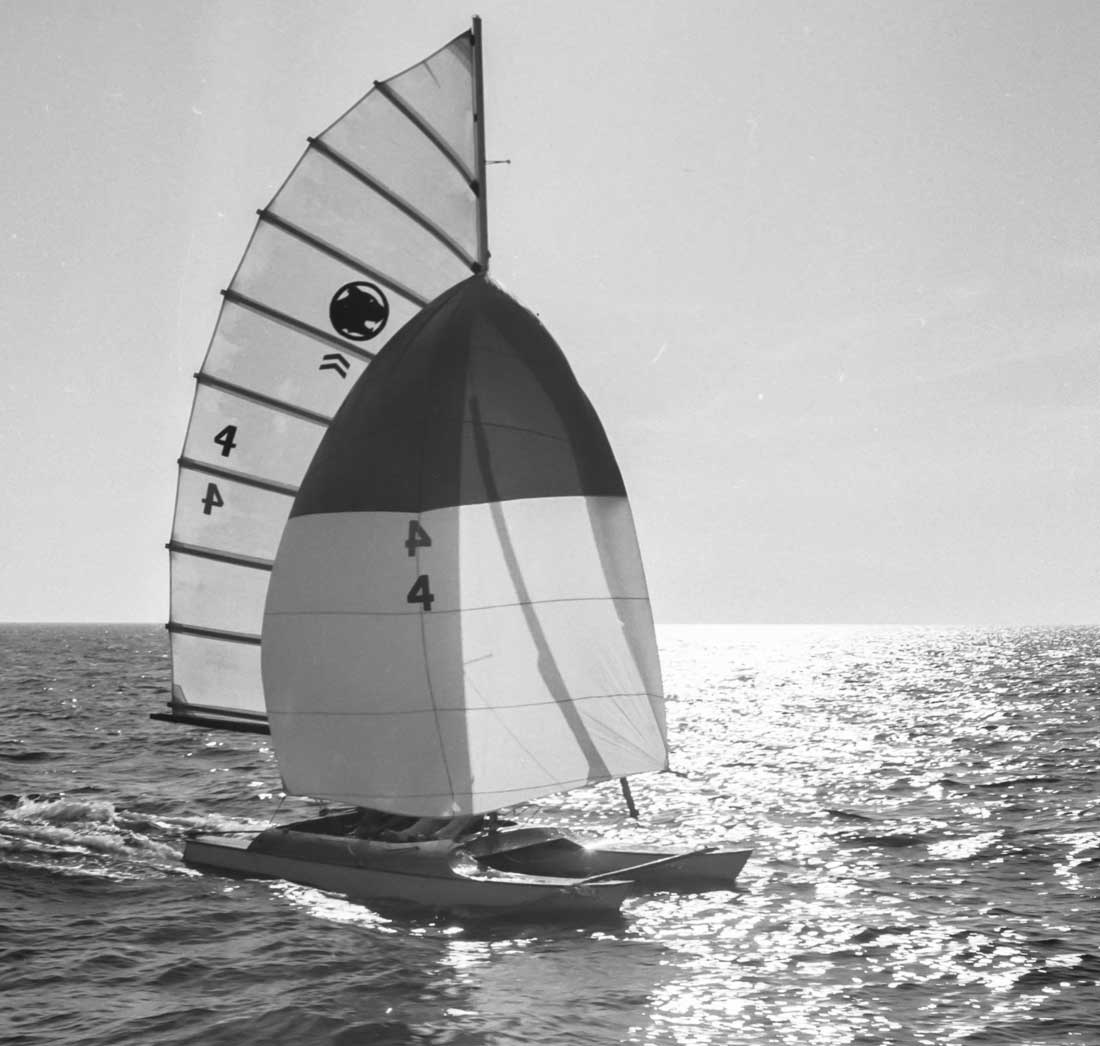 These photos were taken sailing back from Catalina with Warren Andren (we started sailing together in junior high school). 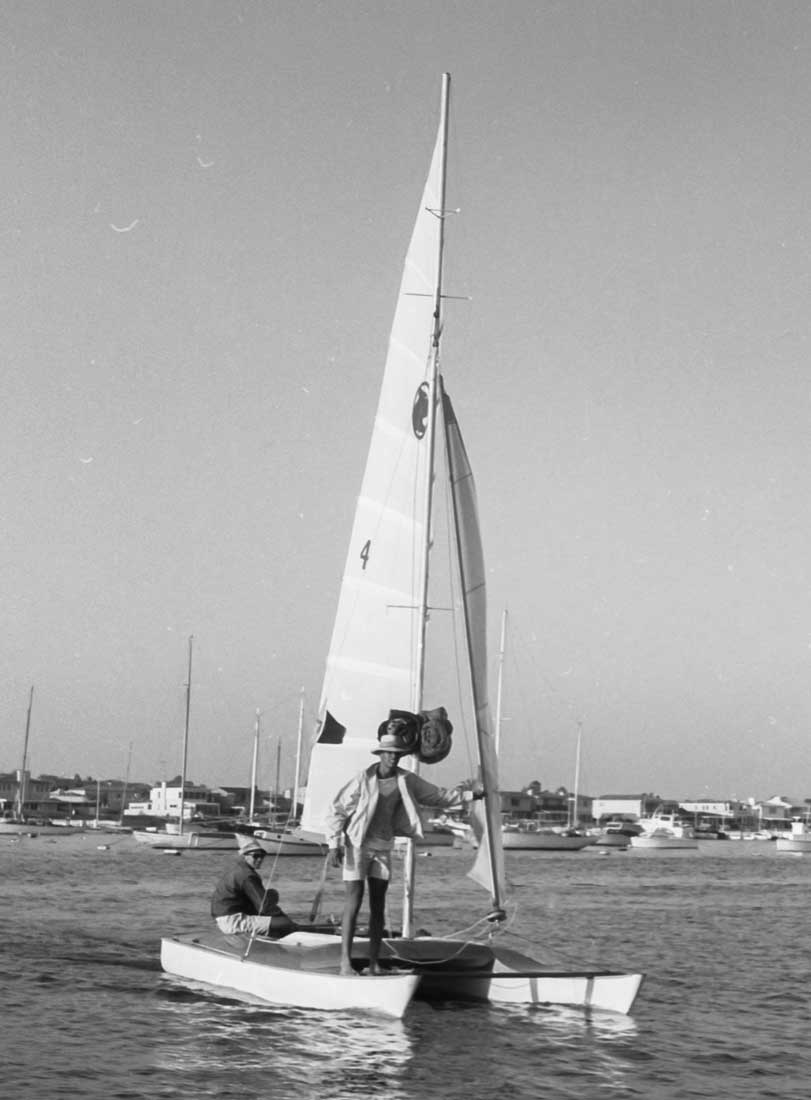 We often cruised to Catalina, and then lived aboard. Live aboard a 17-foot cat… Were we nuts? We had almost all the conveniences of home. This was before the advent of waterproof storage bags, so we carried our sleeping bags above the spray line in the diamond stays.. That’s Jeff Brill getting ready to secure our bow. 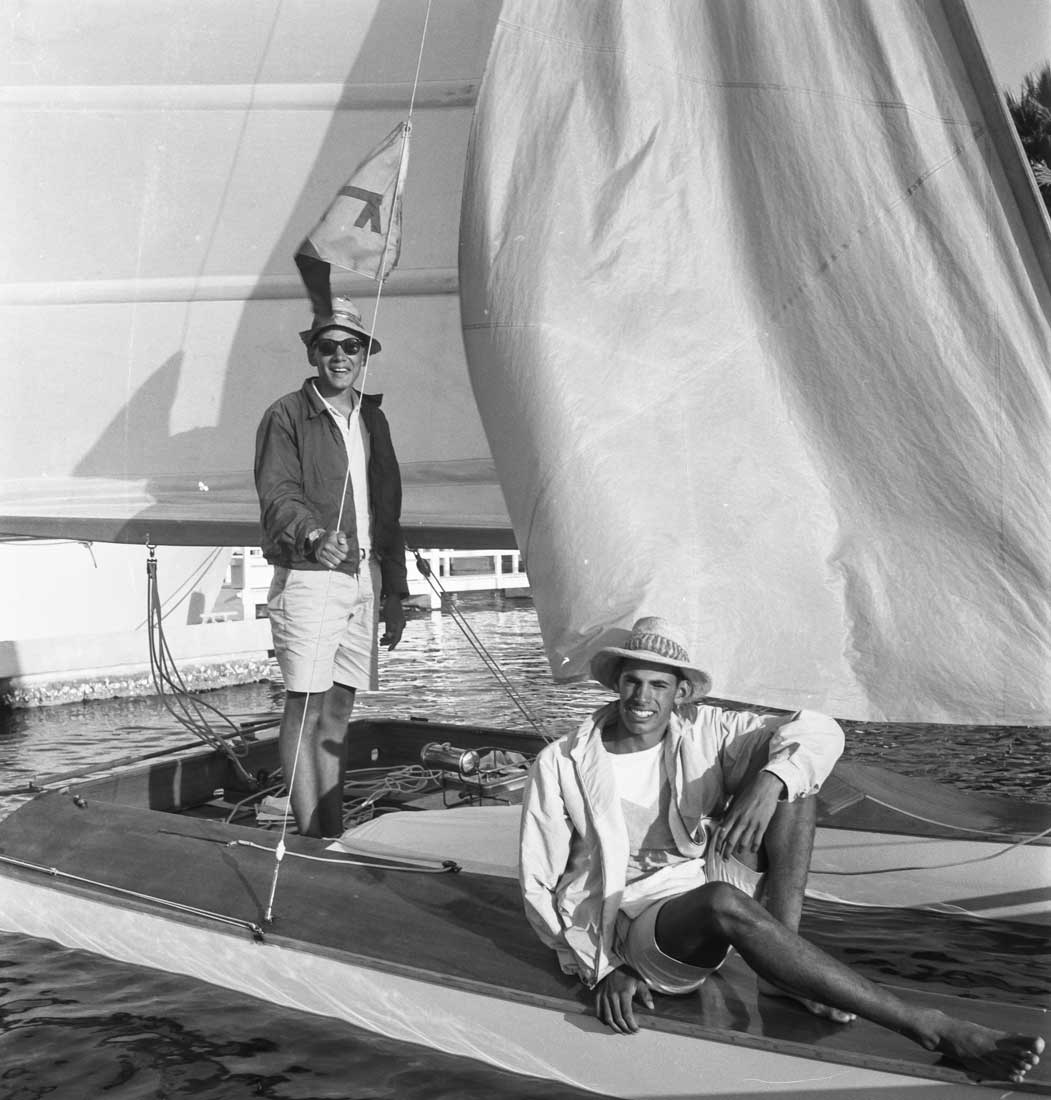 Note the stove, and corner coaming covers in canvas to hold gear in place and protect it from direct spray. 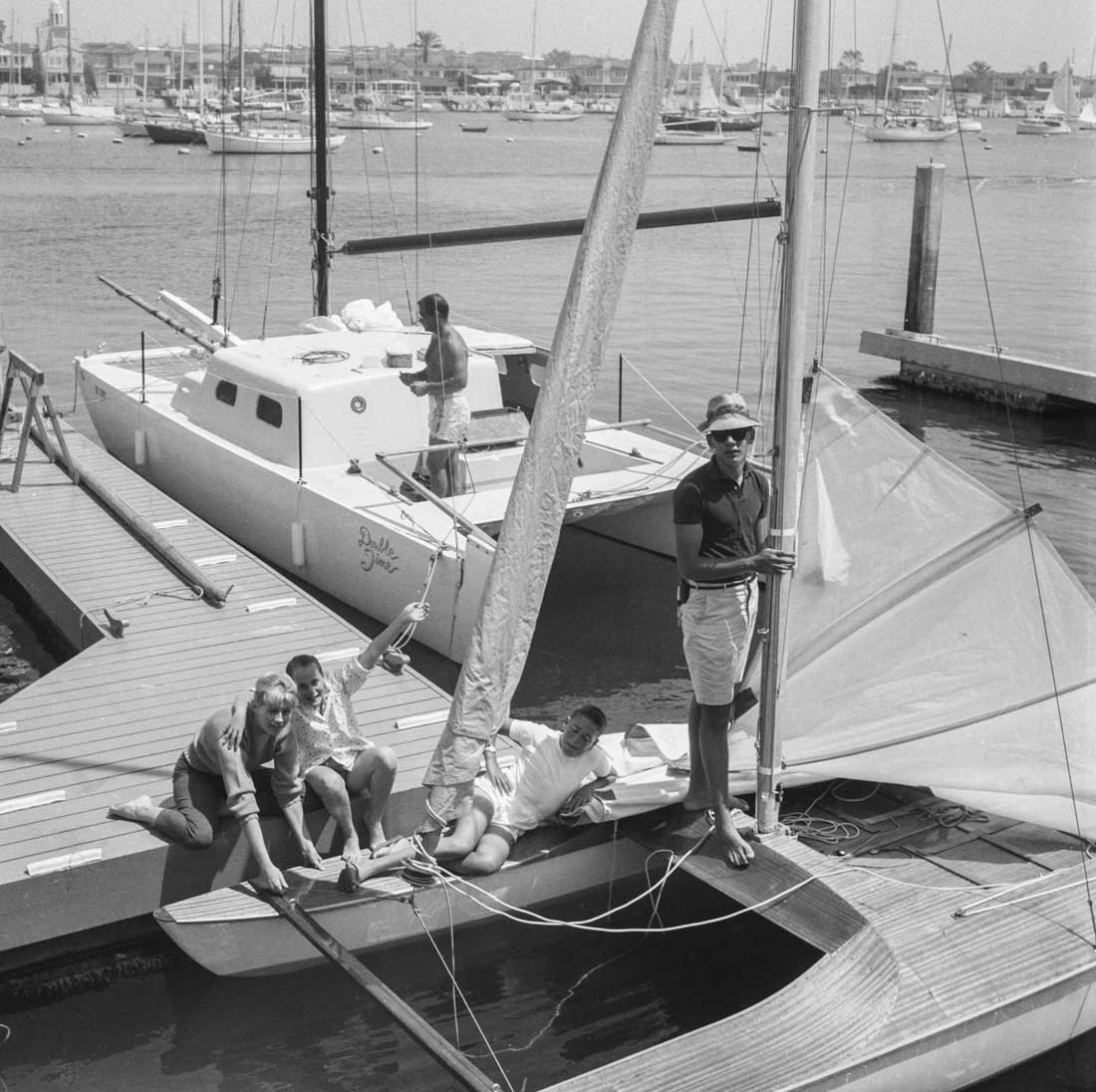 A final Wildcat photo, this one with little sister Leslie, little brother Tony, and high school friend Eve Johnson. Steve is at the mast. Of particular interest to historical buffs will be the 24-foot Warren Seaman/Rudy Choy “Foamy” class in the background. It is from this dock that catamaran icon Carter Pyle took his very first multihull ride. 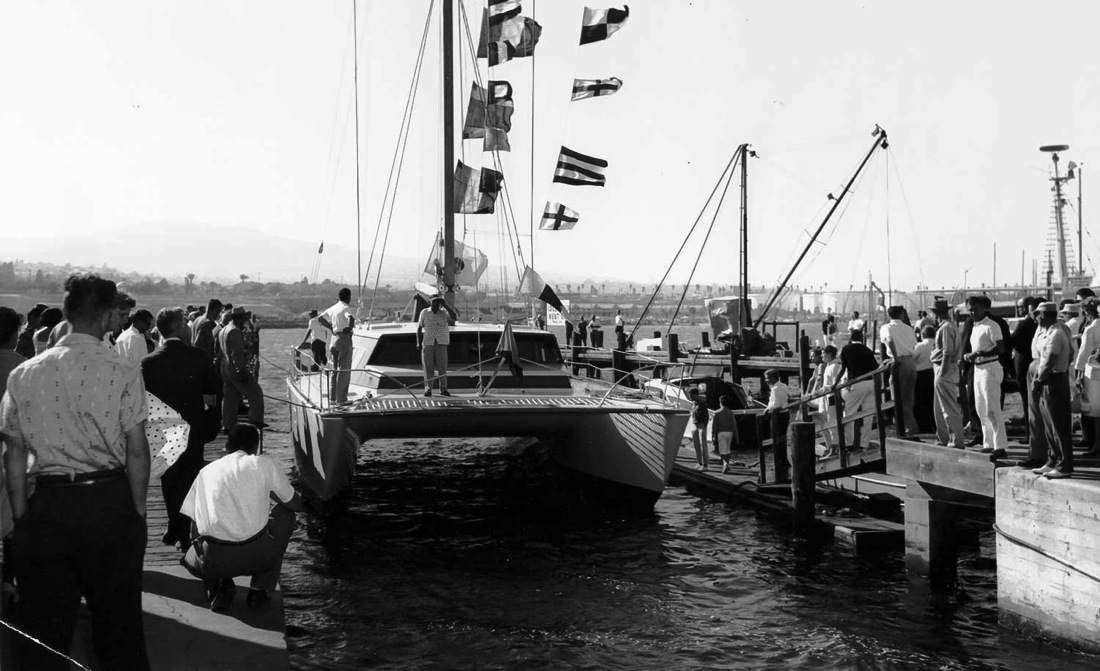 Since we are in chronological mode, next in our lives came the 58-foot Warren Seaman/Rudy Choy design, the HuKa Makani. This launch party shot shows her sitting a foot/30cm below her “designed” waterline. Between extra weight pushed into the boat by the owner (our family), and the designers not understanding basic weight analysis or hydrostatics, the outcome was predictable (with the benefit of multiple decades of experience). 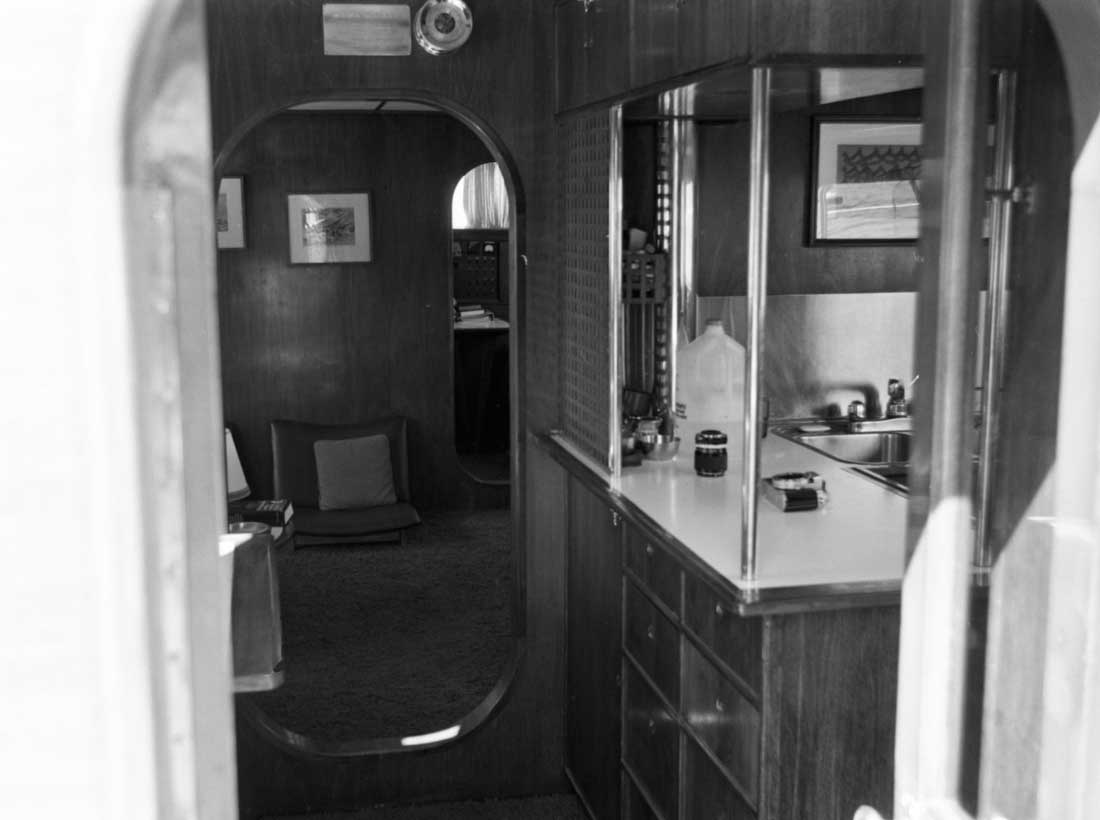 The HuKa Makani had a well appointed interior, spacious, and comfortable as a water base at anchor. This is the view from the entry door looking forward. 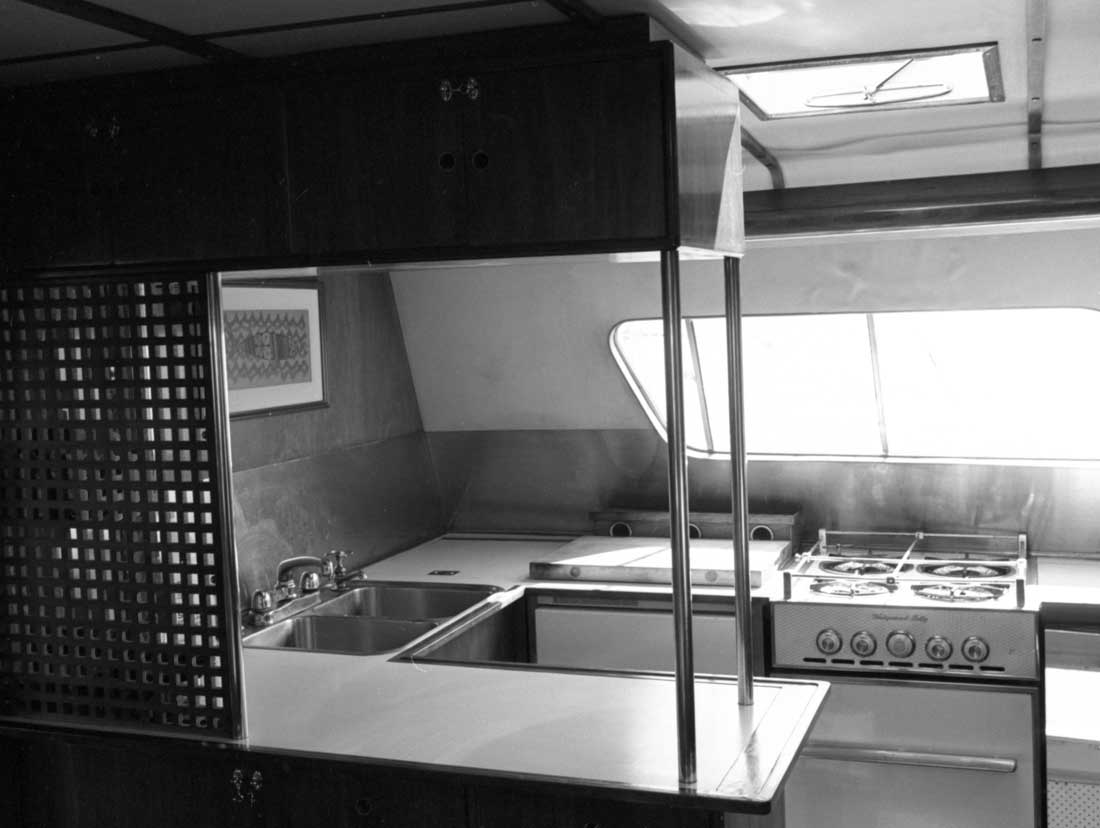 The galley had a propane fridge, hot water heater (instant on), in addition to the stove. 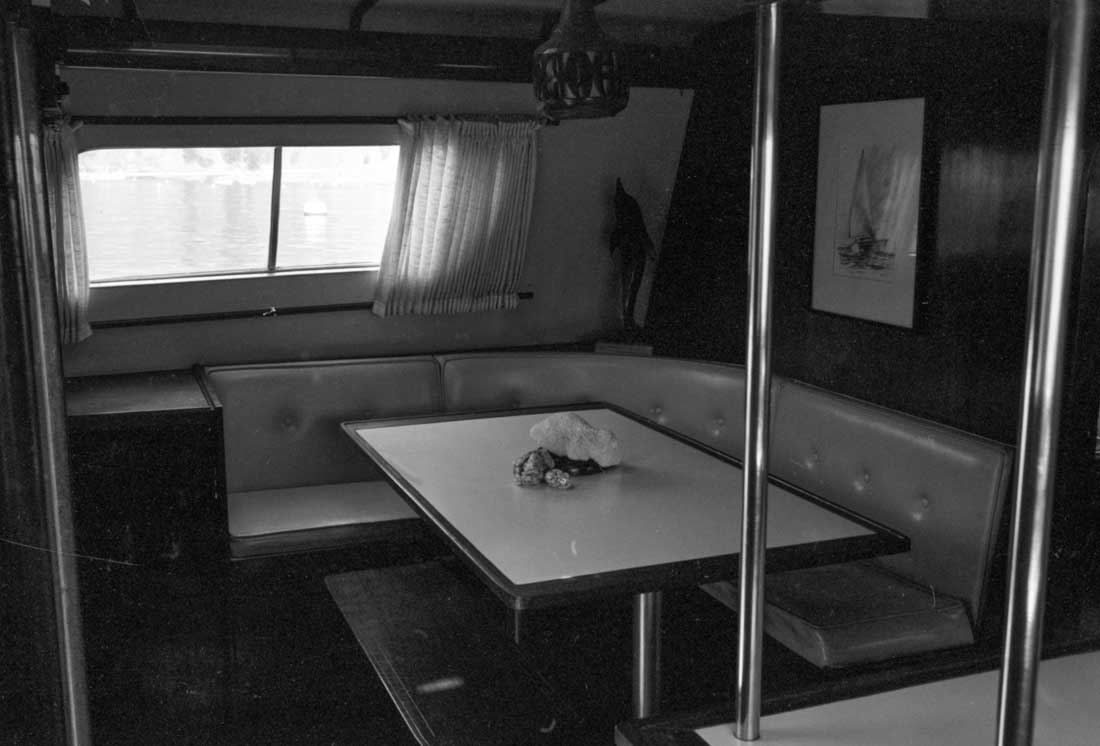 Opposite was a dinette. 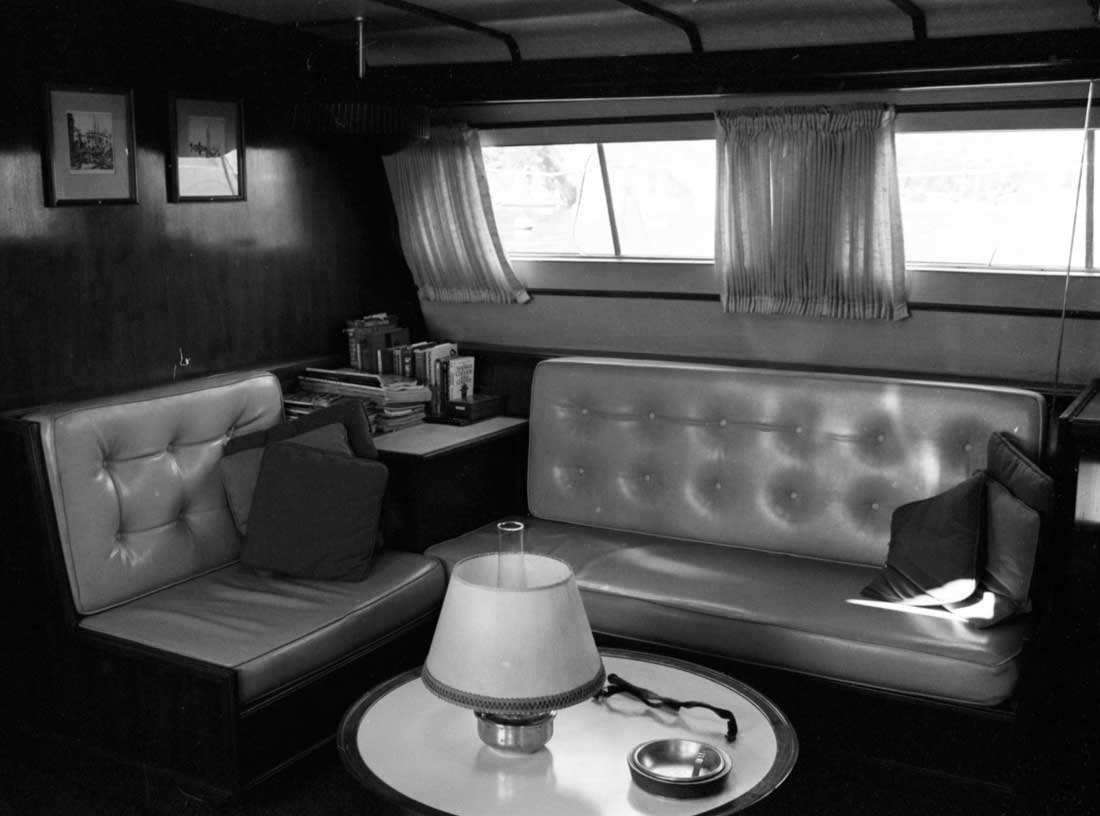 The salon served as the center for many happy evenings. But that Coleman stye lamp almost put an end to our adventures one cold evening in San Diego, when four of us grew very sleepy with the windows closed!

The round table is still in the family, now in the care of Sarah. 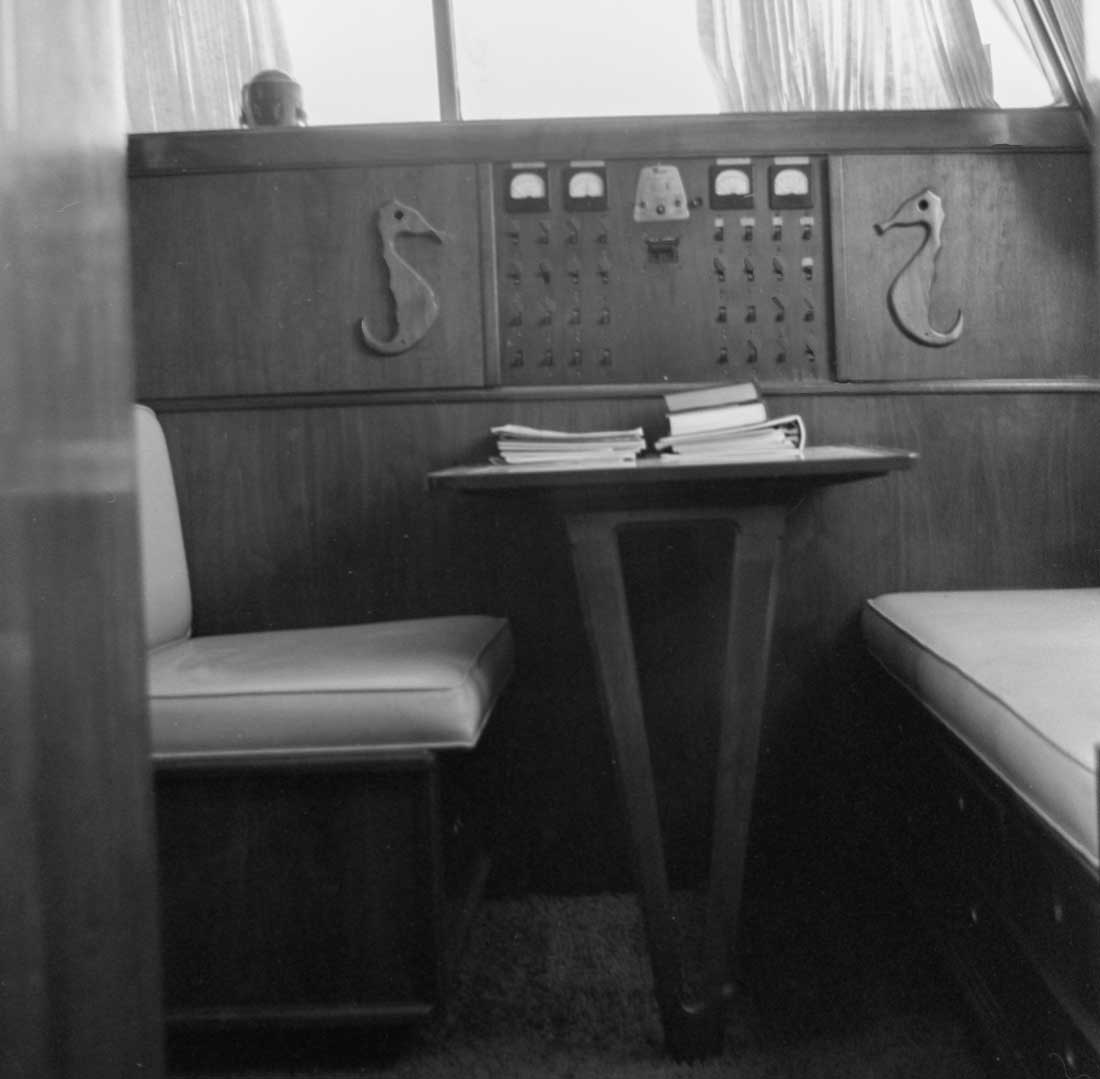 Moving forward we had a nav station with the electrical distribution “system” board. The circuit breakers were very avant garde. Centered is a Benmar autopilot control. 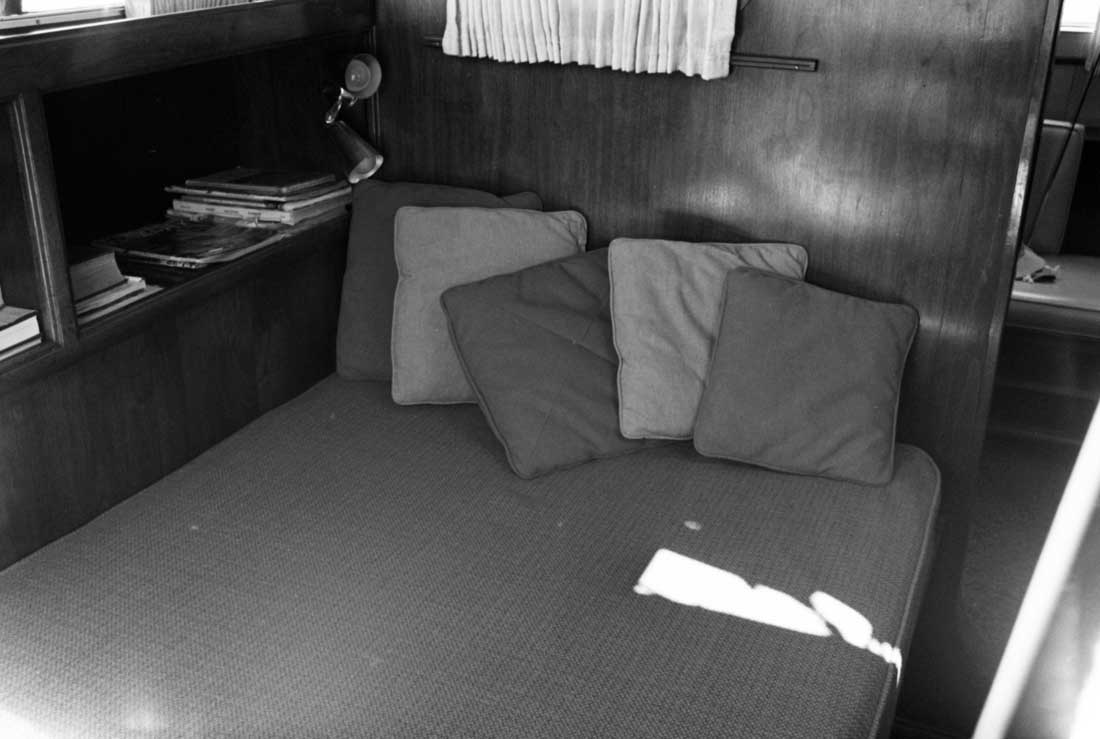 And the master stateroom. If that bunk could tell tales…

There were two very tight “double” bunks in the hulls, under the wing section, with heads forward. Two other single bunks were aft. If you suffered from claustrophobia you might be better sleeping elsewhere. 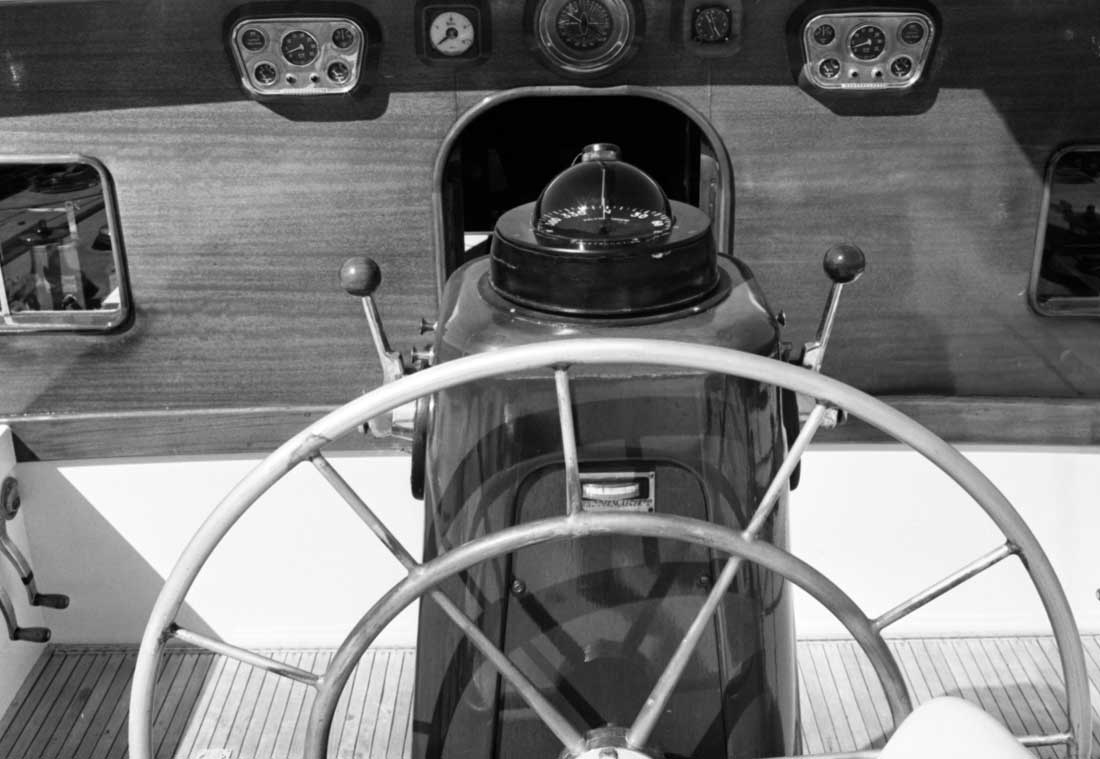 There were twin engines, dual controls, wind instruments and a knot meter, all very advanced in 1959.

Although the Huke (as we called her) was a disappointment in terms of speed, she provided the Dashew family with many memorable days of cruising in Southern California and Mexico. Most important, she was the platform where Steve and Linda met Labor Day weekend in 1965. 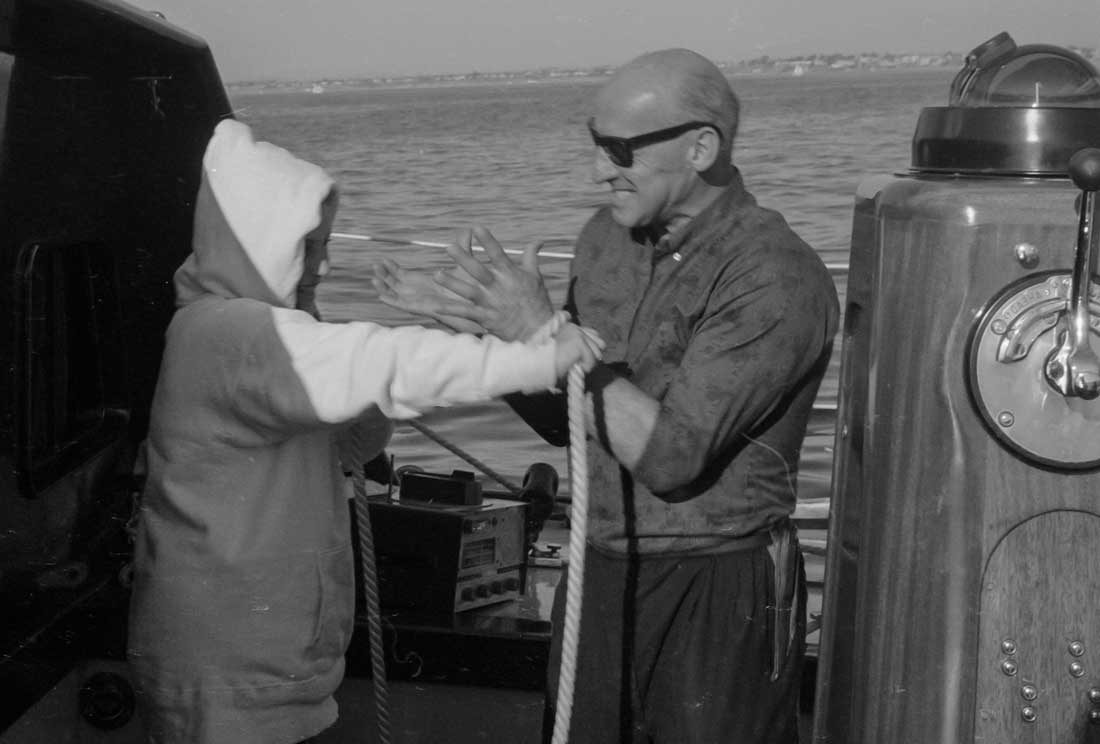 This is Dick Sutton, a self-taught, brilliant, ever so practical engineer, and former professional sailor. Dick had a major impact on Steve’s early sailing education. He had been a rum runner for Al Capone, was a top hand racing on the Great Lakes, sailed aboard the Gertude Theabuade when she lost to the Blue Nose in the schooner races, and designed the tall rig and custom winches for both the schooner Constellation and M-boat Barlovento in the 1950s. Dick sorted out the hydrostatics calculations for the HuKa Makani and figured out where the waterline should go, before she was launched in public. Needless to say he was a hard driving, hard drinking sailor, who would not stand for anything but the best from his crews. There was only one way to do things, the right way, which also happened to be his way.

Moving on now to our first custom boat building project, one from which we learned many lessons, all of which were of the what-not-to-do variety. 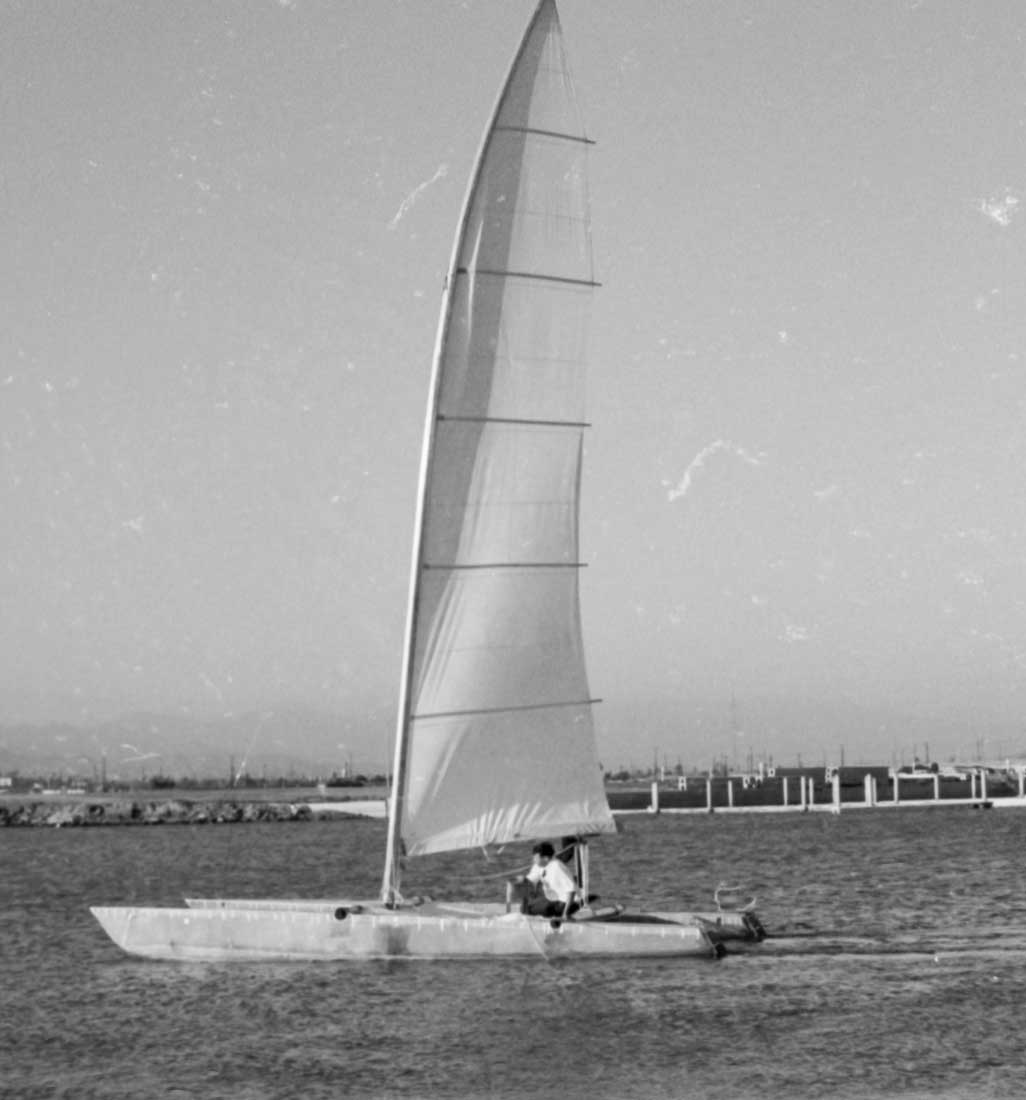 Going for the first sail aboard the C-class cat Enterprise. We knew after just a few minutes that the elliptical tip rig was not going to work. Our budget was shot, the boat needed major re-work, and we decided to concentrate on building our fiberglass construction business. 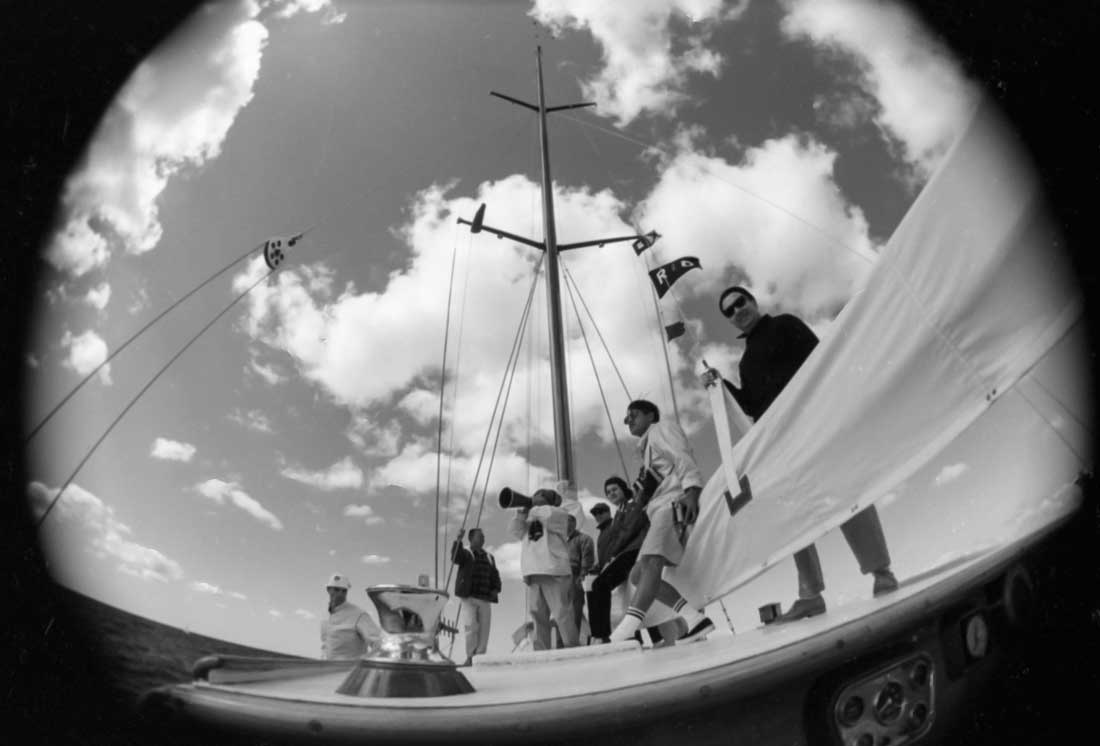 This next batch of photos were taken when the HuKa Makani was acting as a committee boat for a Pacific Mulithull Association regatta in Santa Monica Bay (Southern California). The second to the closest person leaning against the boom is Rudy Choy. He is not very pleased, the reason for which shall be known shortly. 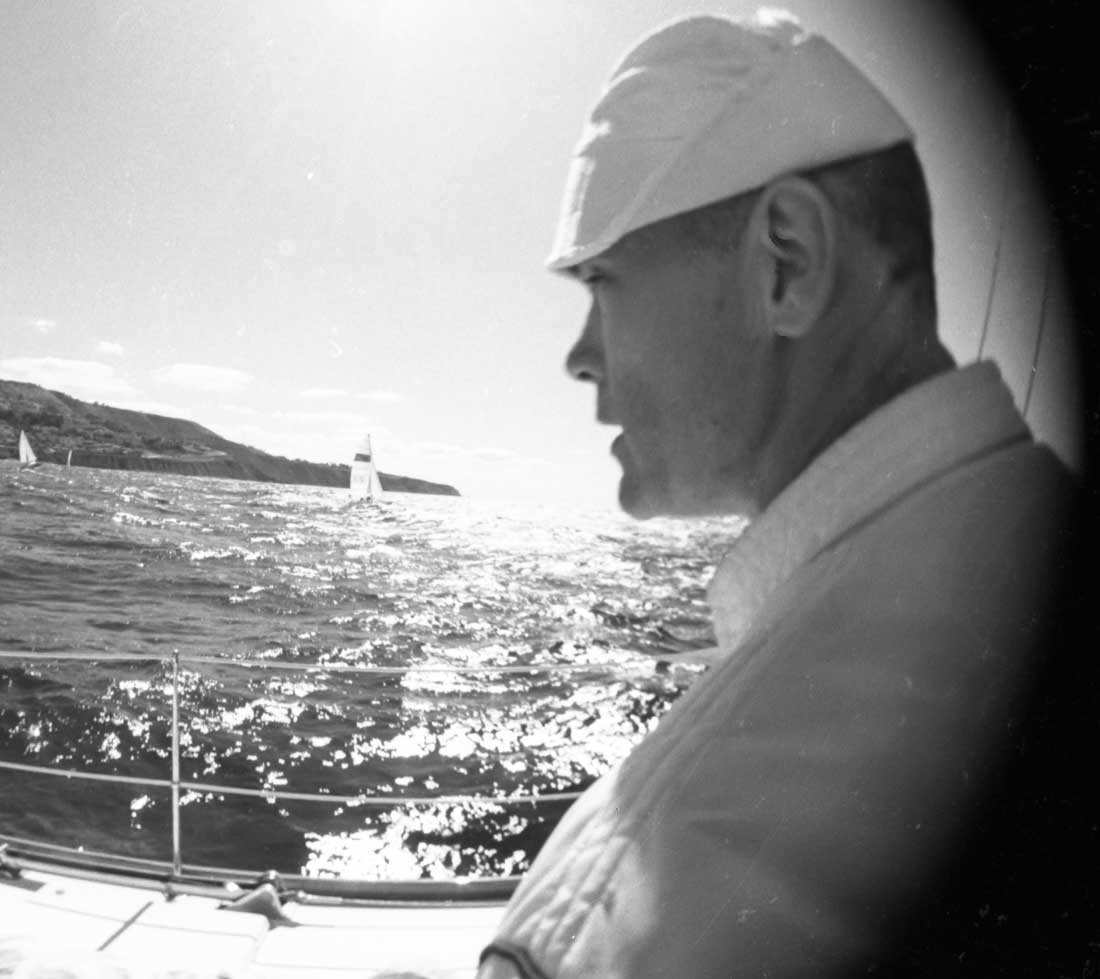 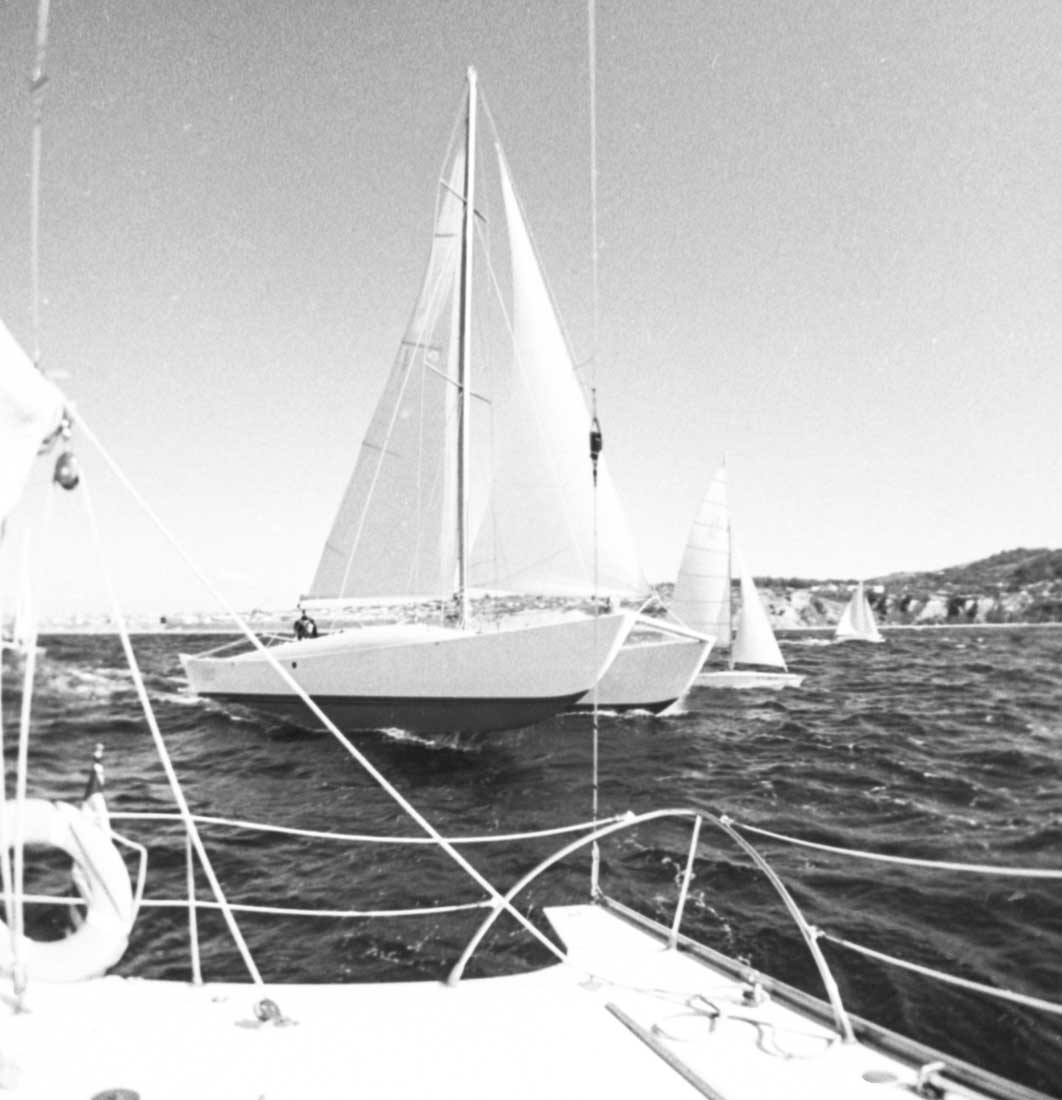 In the earlier cat history post you saw a photo of Aikane, Ken Murphy’s 46-foot Choy/Seaman design. Ken decided to get rid of the house, and a lot of other heavy detritus. Aikane was much quicker as a result.

As the fleet approach the start, Aikane is to leeward, there is a P-cat to weather, foamy class next. At this point Aikane was considered the fastest of the fast – something to which we can personally attest. 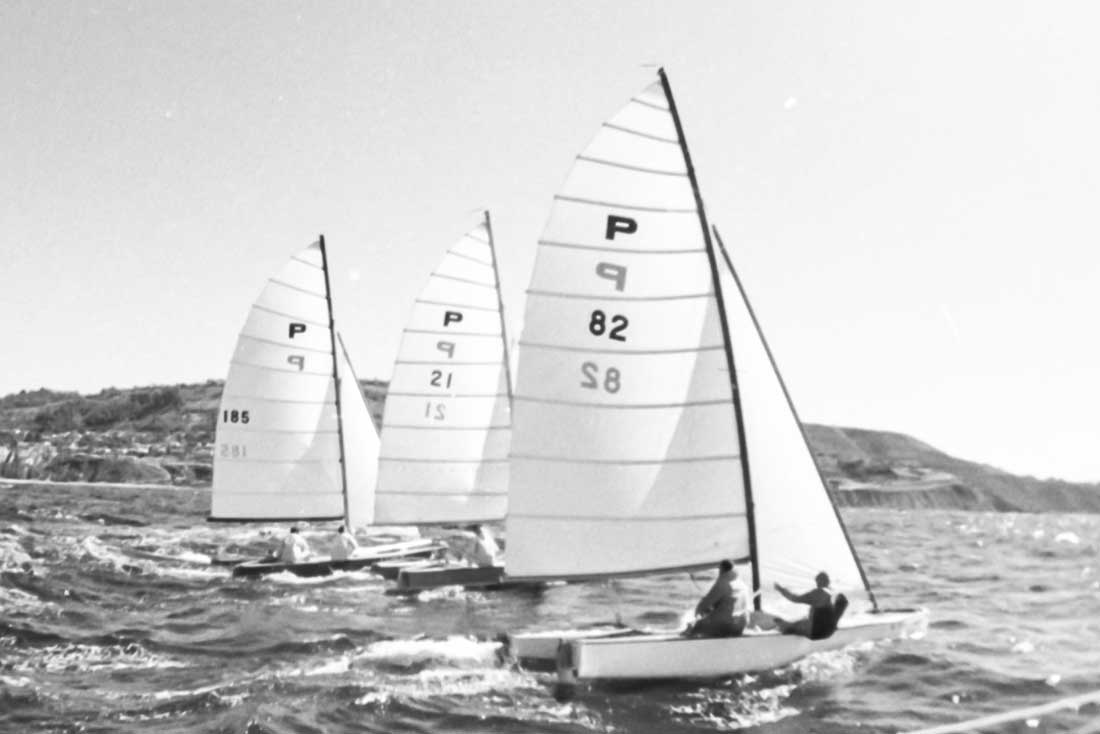 A fleet of P-cats. We are not sure who belongs to which boat at this point, but the lead boats were usually sailed by Bob Baker, Neal Harvey, and Warren Miller. At this point these were considered the fastest of the small boats. 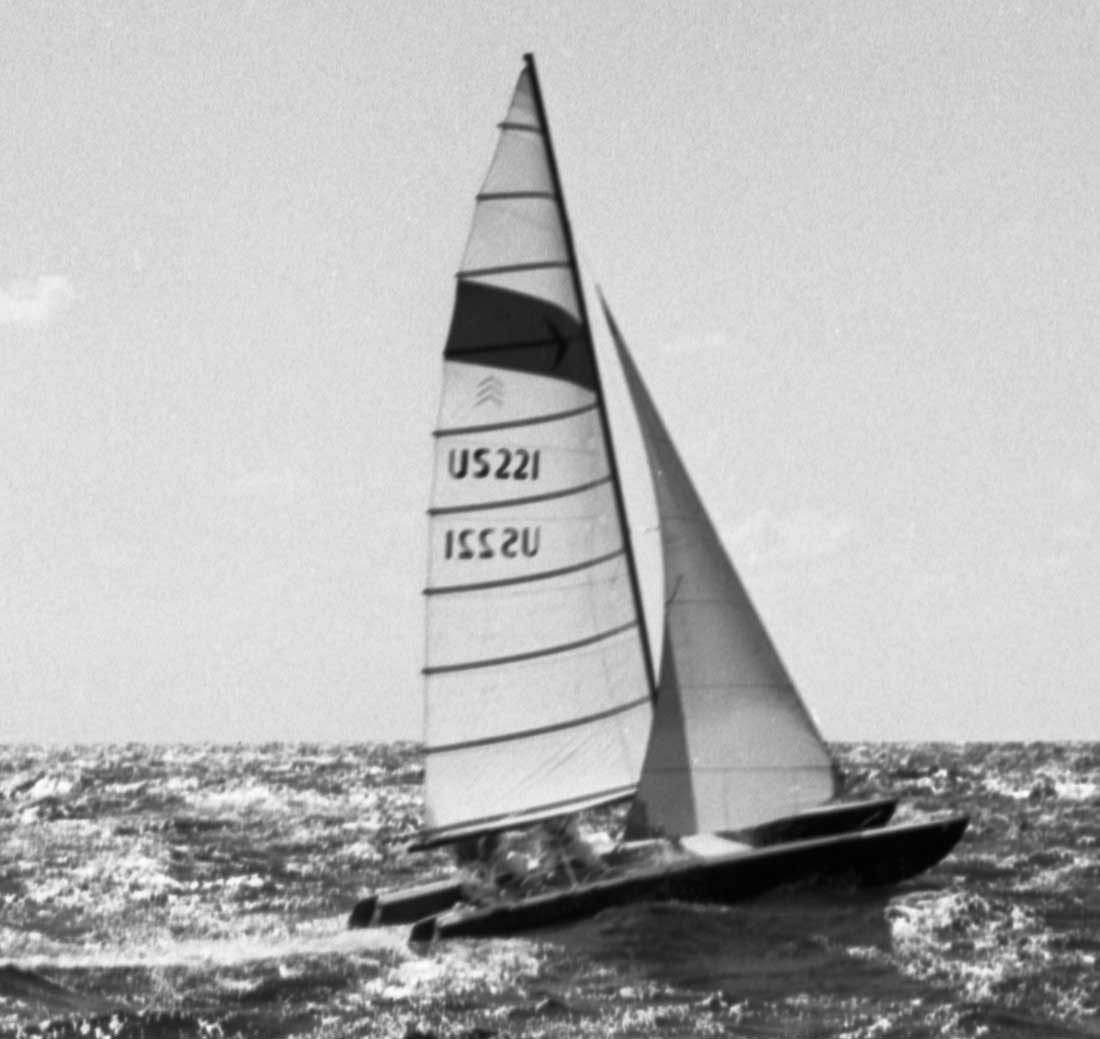 Same regatta, this being Beowulf II, our second Shark. Properly sailed, the Shark was top dog in the small cats. A large dose of the credit for that, and the success of the Wildcat Tango, goes to Swede Johnson, a sail designer/sailmaker with Baxter and Cicero. 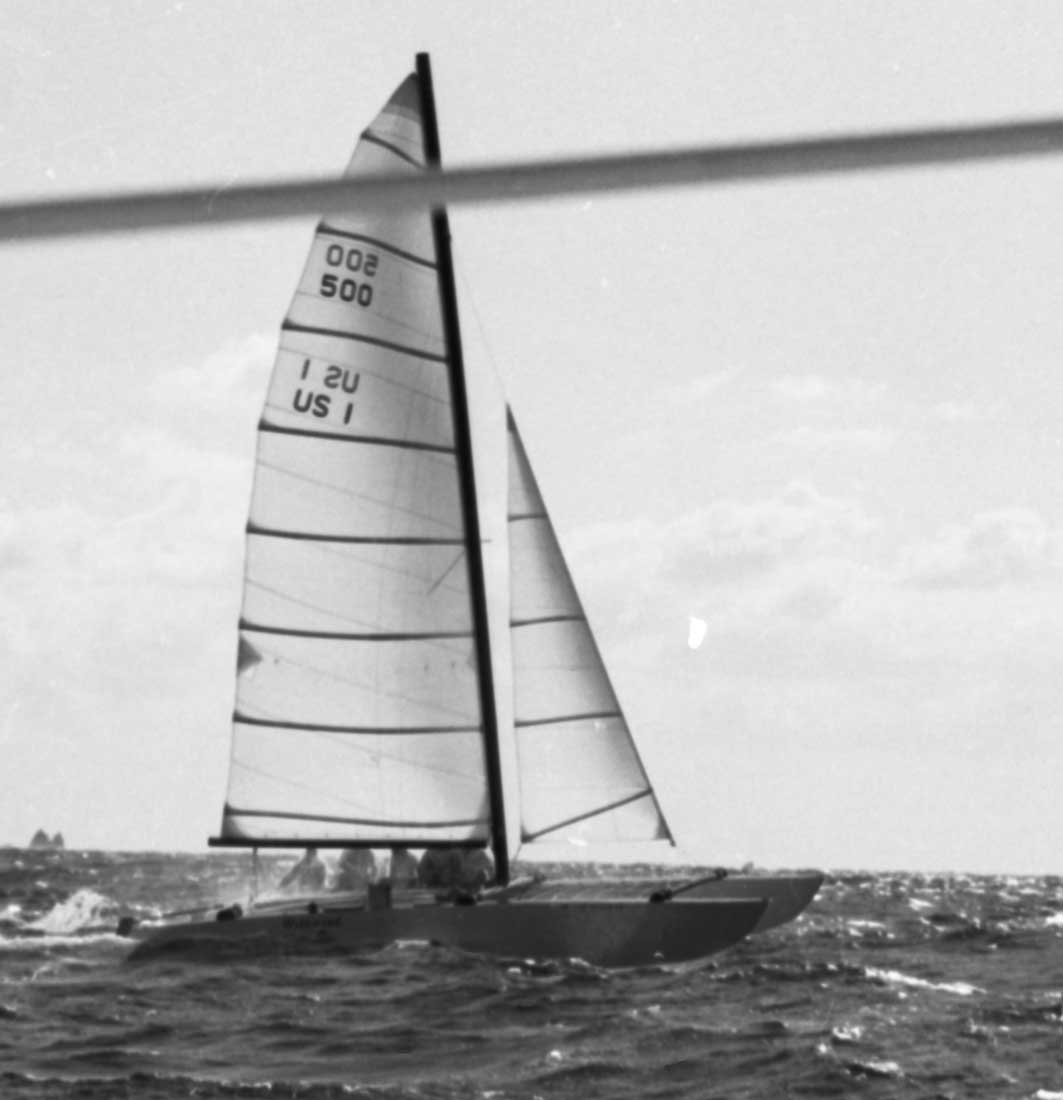 And now the reason for Rudy Choy’s frown. The 32-foot D-class Wildwind in one of her first goes against Aikane. It was not even close. She did a horizon job on Aikane in the light and breezy conditions. Rudy did not want to have to race Wildwind in the future, and so the big boats left the PMA and formed the Ocean Racing Catamaran Association – ORCA. 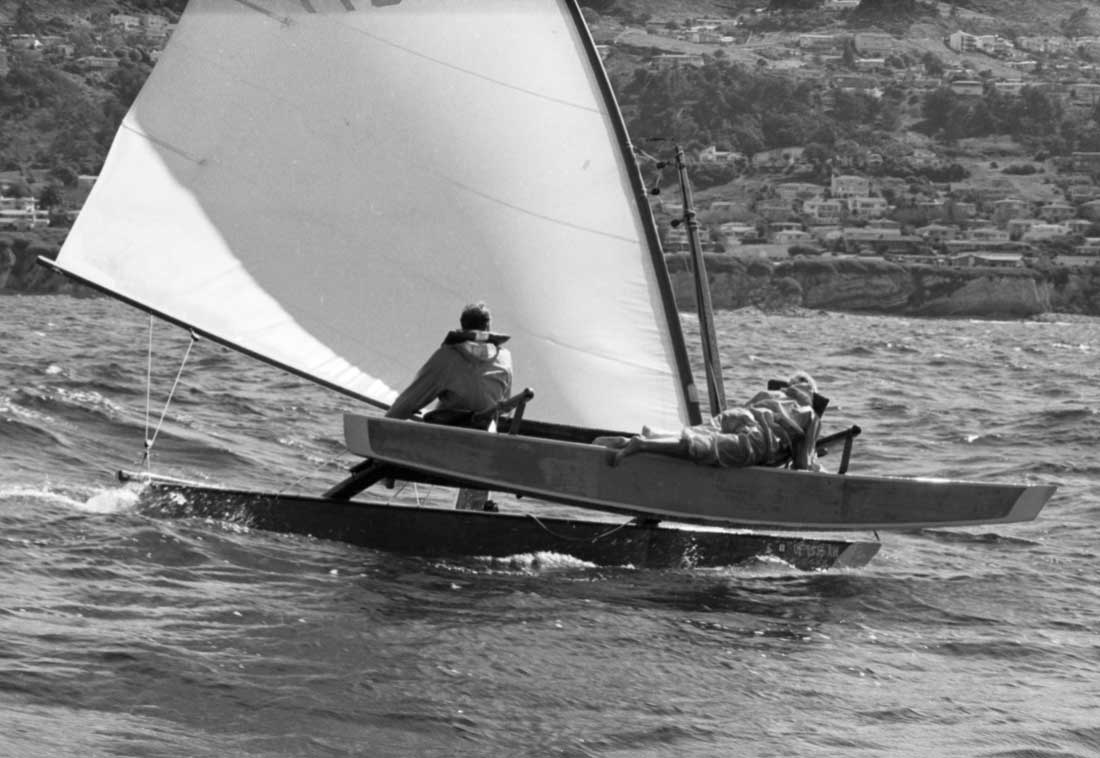 At last a photo which has stood the test of time. The lovely Warren Seaman-designed Malibu outrigger. Quick in the light air, but in a breeze no match for the more modern cats.

Moving now to Bob Noble’s garage in Costa Mesa, Ca. That is the C-Cat Beowulf IV under construction. The hulls were built with a balsa core, and a single layer of six ounce boat cloth and epoxy resin on each face of the sandwich. 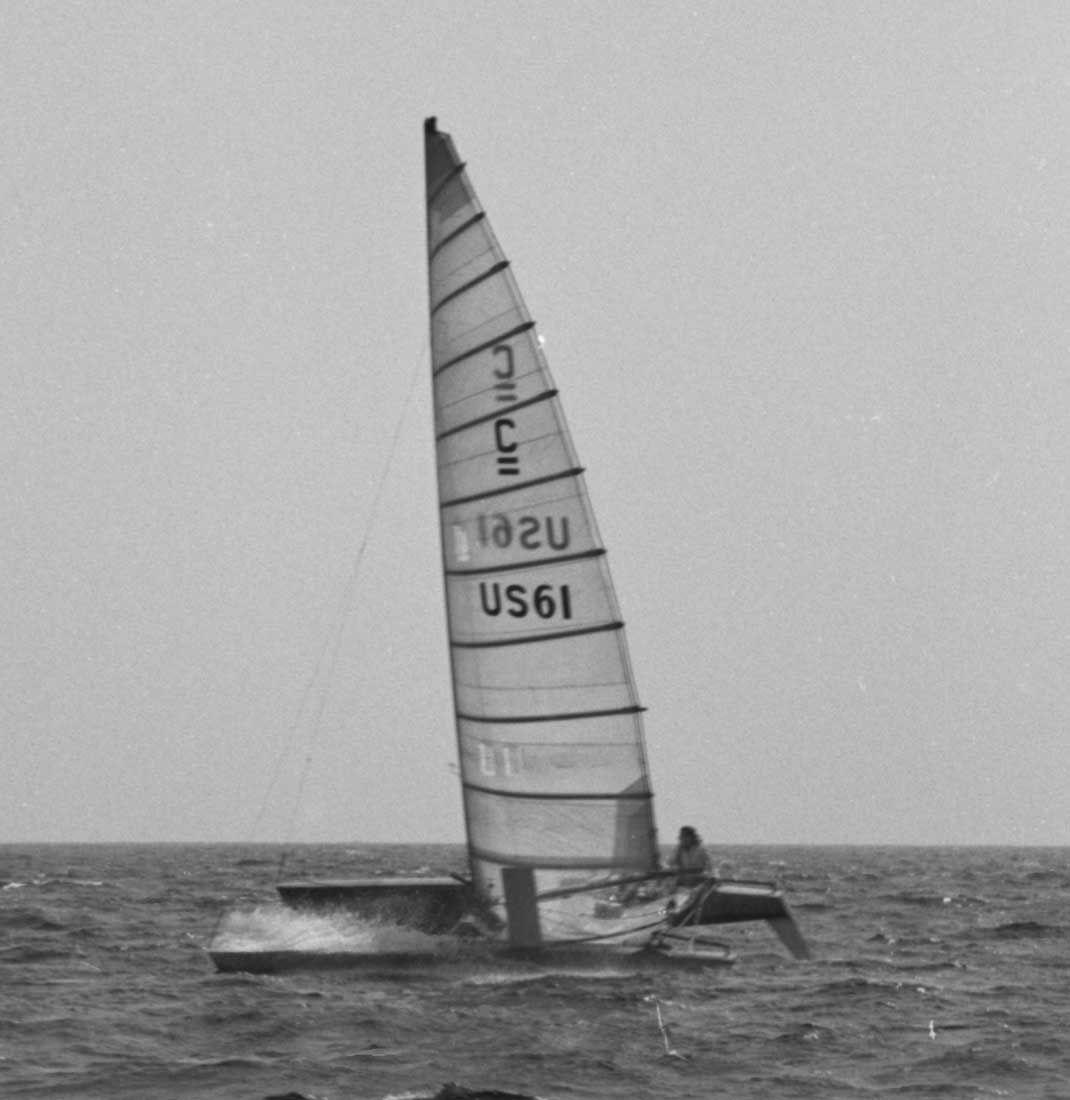 Beowulf IV at speed. In this view there is a good look at the deck seal between mainsail and trampoline. The leaches of the two mainsails are also outlined. The windward of the two salis was flattened and the leeward allowed to take shape. The resulting asymmetrical foil shape was very powerful. 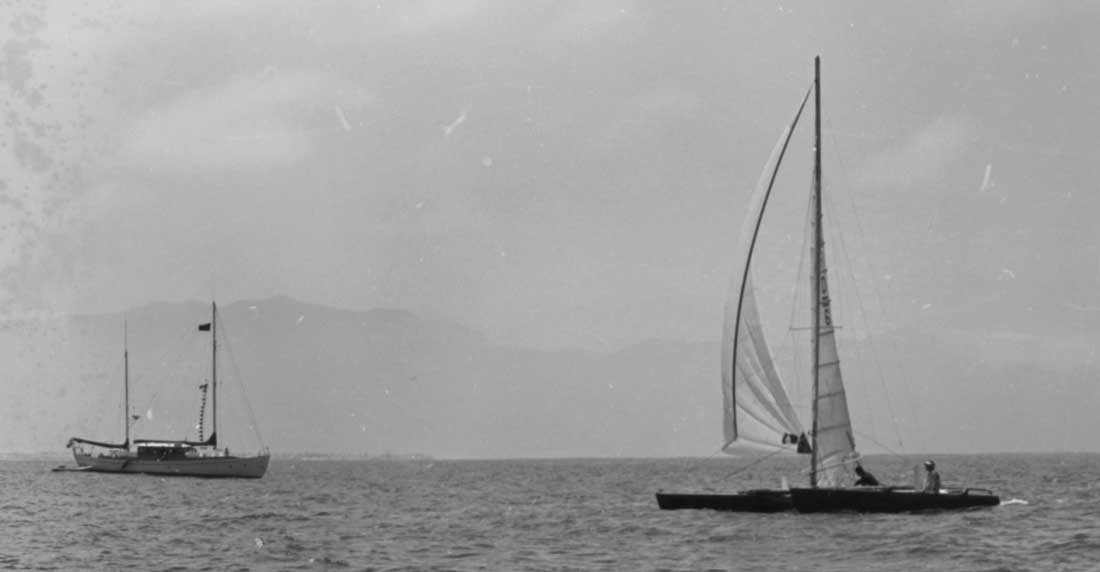 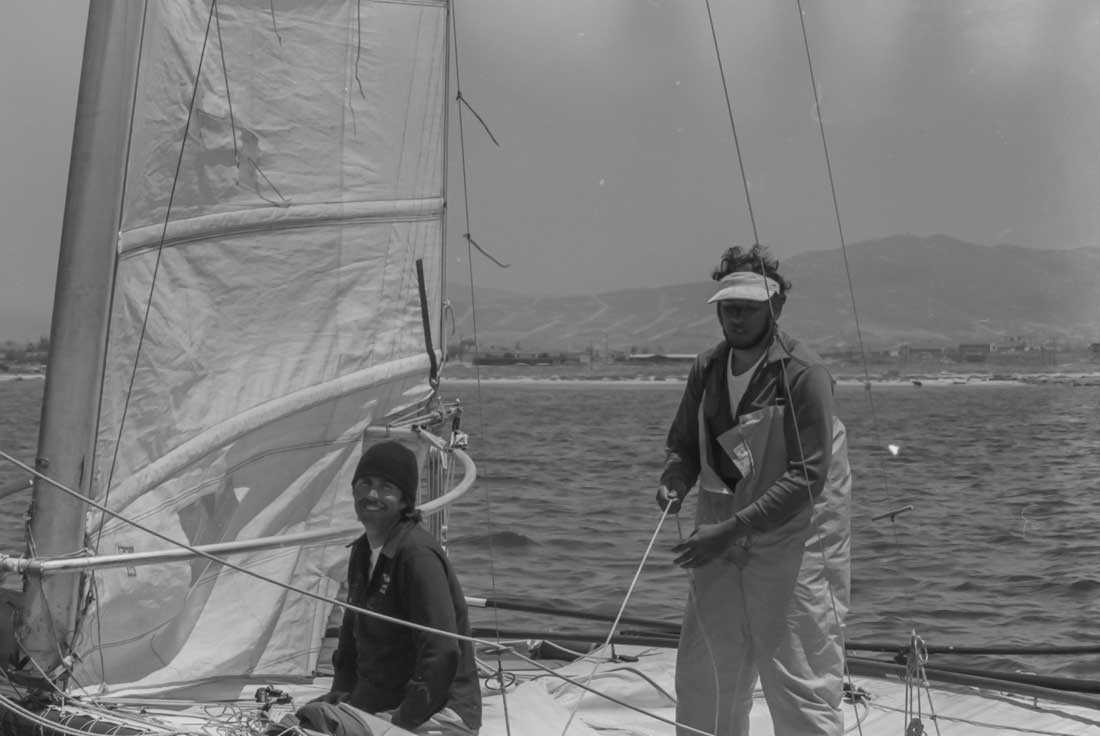 Beowulf V here and a smiling sailmaker, Rick Taylor. Note the mainsail end plate and wishbone boom. Rick was the sailmaker of choice for the C, D and Tornado cats in those days. This was her “big” mainsail, 425 square feet (class rules allowed 500). However, we found she was faster with a smaller sail which allowed us better sail control. 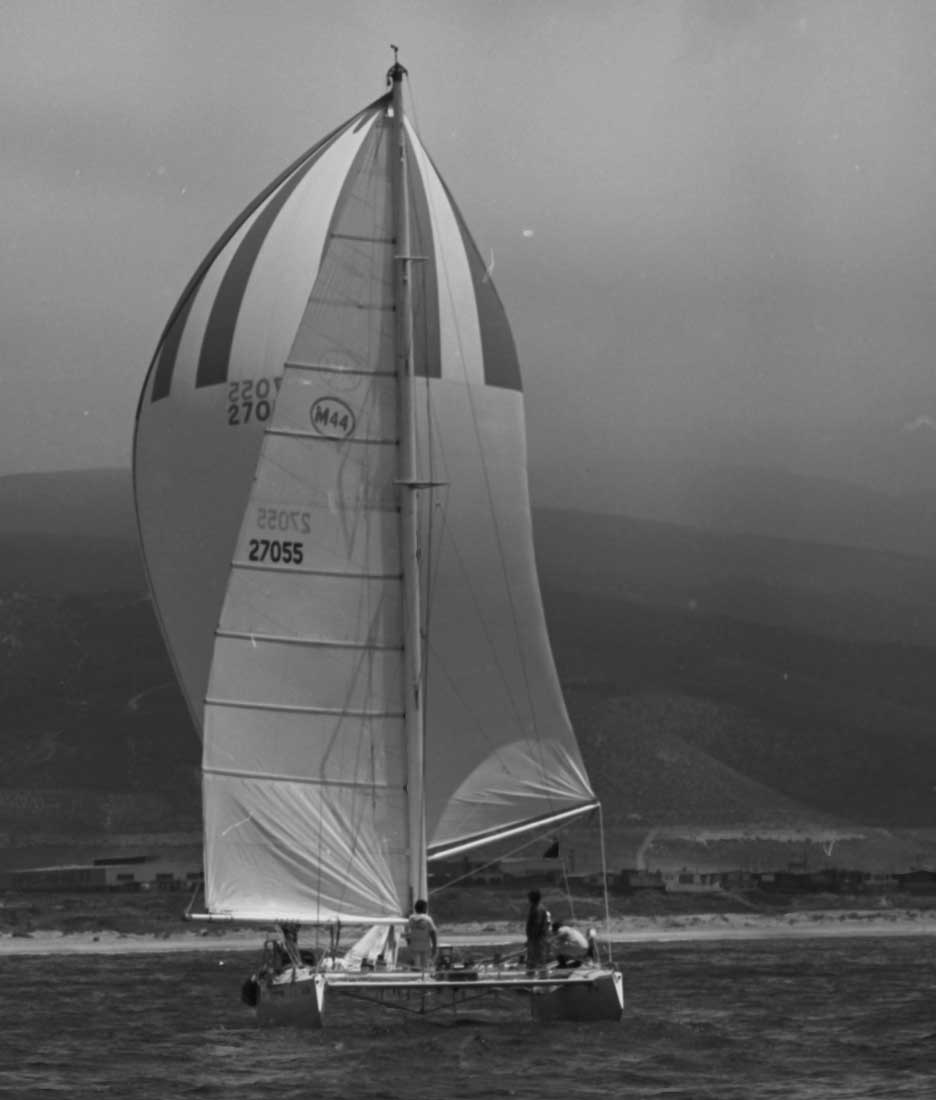 A last photo for now, this of Bob Hanel’s Double Bullet. Between 1970 and 1974 Beowulf V won every race she finished with a single exception, that being a loss to Double Bullet. This still irritates Linda.

This entry was posted on Tuesday, December 31st, 2013 at 9:57 am and is filed under Dashew Logs, four, The Logs. Both comments and pings are currently closed.